Dive into this aquatic-themed slot that comes with fabulous potential riches!

Big Catch slots is a 5-reel video slot game with 20 paylines and an underwater wonderland theme. Powered by Novomatic Software, this medium variance slot has an RTP of 94%. The bonus features include a Pink Starfish Wild and a Gamble Feature, with rusty anchor and colourful sponge symbols.

Read about this features along with Big Catch slot’s RTP and slot volatility in this Big Catch Slot Review for January 2022!

Play the game at the best casino sites. From our research, we have created a list of the Big Catch Slot Sites and casino sites in January 2022:

Big Catch is an online casino slot game from Novomatic with a theme inspired by the life underwater.

The main attraction of this video slot is its pool of offers across five reels, three rows and 20 paylines.

These include an appropriate fishing feature along with under-water related happenings.

The Big Catch slot takes players under the sea where they will get to seek their fortunes.

The reels are set above sea anemones and other underwater plants.

The symbols include the classic card symbols designed to look like sea sponges along with Rusty Anchors, a variety of Fish, and the Big Catch Logo.

Players can enjoy playing Big Catch on their computer since this slot is compatible with Mac, Windows, and Linux.

The Big Catch slot offers special features, including the following:

This is a special symbol represented by the pink starfish.

It can substitute for any other symbols in the game to help players form more winning combinations.

This symbol only appears on the third, fourth, and fifth reels. A number of this symbol may also appear stacked on the reels.

This symbol may also appear stacked with other Big Catch symbols on all five reels.

When players manage to land these stacked symbols, they will be awarded 50,000 coins.

This is a special feature in the game which can be triggered randomly at the end of any spin.

When it is activated, the reels will get filled with water, and the players will be given a chance to fish for prizes.

During this feature, players are to select a reel and to lower their fishing hook.

For this, it is better to catch the biggest Fish since it holds the highest prize.

The feature will only end if the player manages to catch either the 50,000 cash prize or the Boot symbol.

Players can utilize the Big Catch slot game’s Autoplay feature wherein the reels turn automatically for their preferred number of times without interruption.

The Big Catch Slot does not offer a Free Spins bonus. 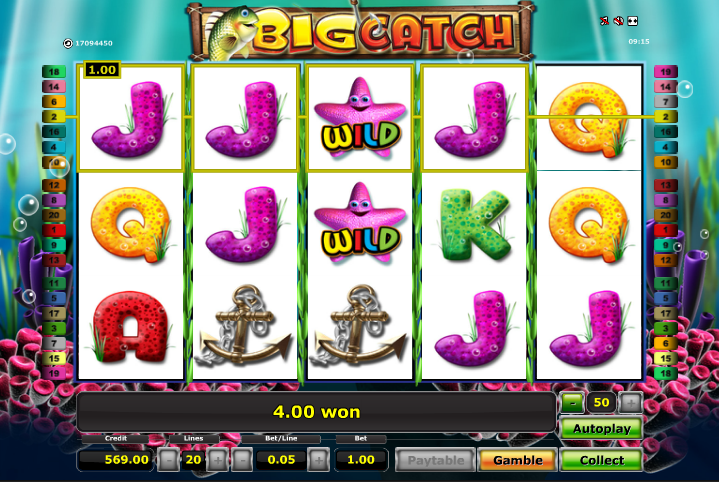 The minimum bet in Big Catch slots is only £0.10 per spin.

Players may also bet up to £100 per spin by adjusting the bet settings in the control panel.

This game boasts a maximum possible payout worth a whopping 50,000 coins by waging the maximum bet on all bet lines.

The Big Catch slot is powered by Novomatic.

Novomatic software has a turnover of around EUR 5.1 billion in 2019.

The gaming world considers Novomatic be one of the largest gaming technology companies.

What is the Big Catch Slot’s RTP?

The Return to Player for Big Catch is 94%.

This payout percentage for the Big Catch slots means that there is a theoretical return of 94 coins for a 100-coin wager.

The Big Catch slot has a medium variance.

This means that both the chances of winning and the prizes to be won are at a moderate level.

However, with its RTP rate that is almost at the average level, players can still expect this game to have generous enough payouts.

In conclusion to this Big Catch Slots Review for January 2022, the Big Catch slot is ideal for players who are looking for uncomplicated gameplay and payouts that are just enough to get back their money’s worth.

Despite not having a progressive jackpot and a Free Spins feature, the well-rendered graphics and other features mentioned above are already enough to say that this slot game is highly recommended.