Do you find Indian cultures and values interesting?

Bollywood Slots is a vibrant 5-reel, 9 payline, online video slot game. Powered by NetEnt, this medium variance casino game has an RTP of 96.1% and a romantic Bollywood theme. You will fall in love with the bonus features which include floating flower wilds, blue jewel scatters and free spins.

From our research, we have created a list of the Best Bollywood Story Slot Sites in October 2021:

Bollywood Story is a video slot game with a theme inspired by love against all odds from NetEnt. It comes with 5 reels, 3 rows, and 9 paylines.

Bollywood Story mirrors the desire of the new Indian generation for changing Indian old-fashioned values. The story is based on the love between a beautiful young woman and a handsome young man.

But since nothing comes that easy, the young lady has an evil step-mother who is determined to marry her off to a repulsive rich old man for selfish reasons. One of which is for the step-mother to be able to continue living the life which she has become accustomed to.

This is because she is used to living an expensive lifestyle which includes strolling in a beautiful house with marble floors, decorative pillars, stained glass windows, and rugs that cost lots of fortune.

All these being said, the players’ role is to help the star-crossed lovers get their happily-ever-after by spinning the reels. At the same time, they could win cash prizes!

When it comes to graphics design, the Indian-inspired theme of Bollywood Story is clear soon as the players start playing the game. The colour scheme is vibrant and bright and is consistent with the Bollywood tradition vibe it aims to portray.

The symbols consist of everything players would expect from an unforbidden Indian love-themed video slot game. These include Bollywood-related items and characters with their well-produced graphics.

The former include the royal card symbols 10, A, J, Q, and K in jewel colours as well as a sapphire pendant of some sort.

Meanwhile, the latter consist of individual portraits of the lovers framed in flowers, the old rich guy, and the step-mom.

All of these are placed against a backdrop that resembles a ballroom of a mansion.

The background audio is also impressive and unique, given that it is an authentic Bollywood music which further increases the overall feel of the game.

All in all, the elegantly drawn graphics along with the matching music have an encouraging feel to them that make players brave enough to gamble their hearts out and help the young couple have a happy ending.

Players can set the maximum bet available by clicking on the “Max Bet” button. This option spins the reels automatically.

Bollywood Story now optimized for mobile play and is also available on all mobile devices such as iPhones, iPads, Android phones, and tablets. This is substantial for players who prefer playing on the go! 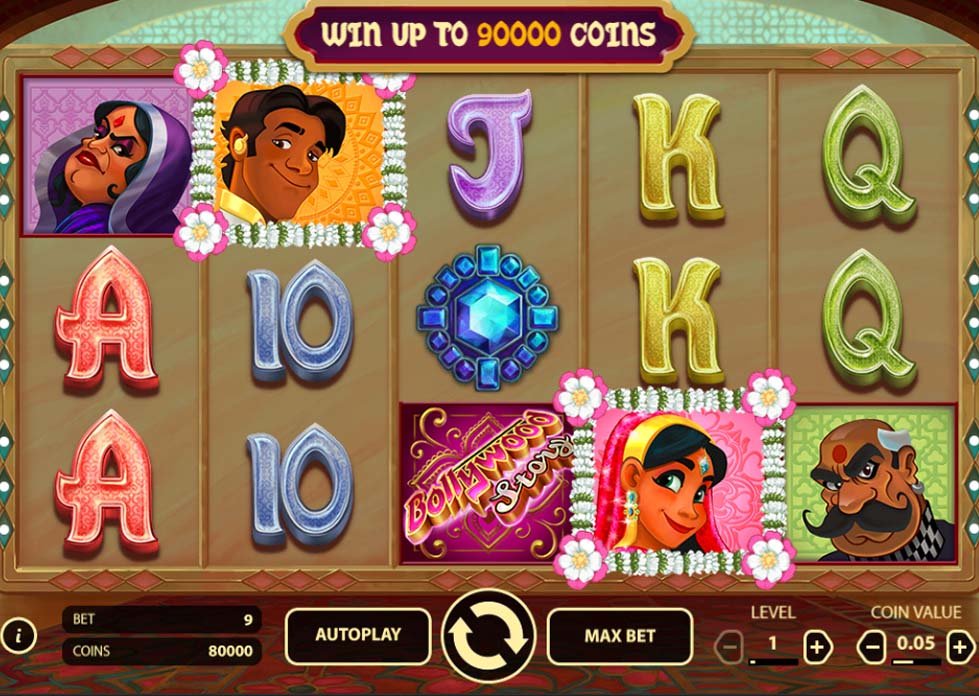 This can also land on top of regular symbols and turn them into Wild ones. 2 to 4 floating flowers can appear randomly in each spin during the base game.

Landing three or more of this anywhere on the reels can award the players Free Spins, the number of which depends on the number of Scatters they manage to land.

The Free Spins is a special feature awarded by three or more Scatter symbols. 3 to 6 floating flowers can appear randomly on each spin during this feature. It can also be retriggered when three or more blue jewels appear.

Bollywood Story is played on 9 paylines running from left to right.

The maximum is 1; meanwhile, the smallest coin size is 0.01. The number of coins per row runs from 1 to 10. Meanwhile, the highest award a player can get is a whopping 1,000 coins. 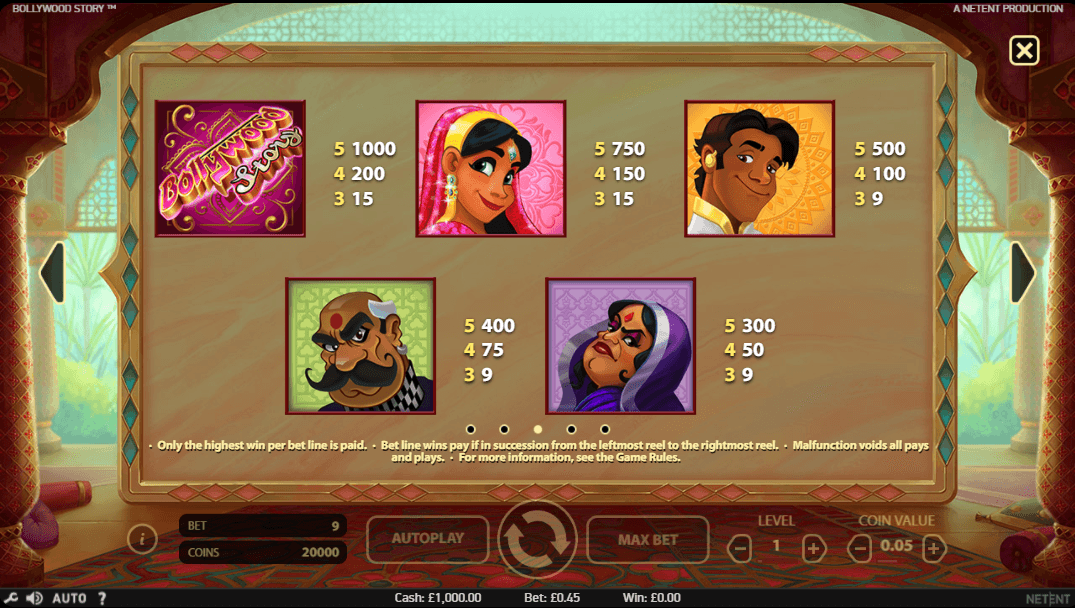 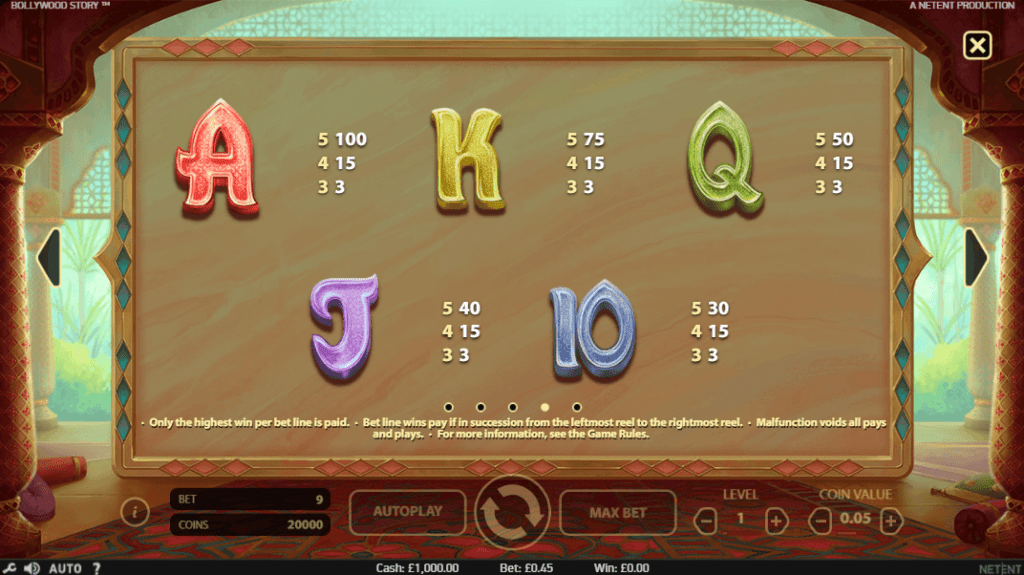 Bollywood Story is developed and released in 2018 by Net Entertainment.

The Return to Player for Bollywood Story is 96.1%.

Bollywood Story has a medium variance.

Which means that both the prizes offered and chances of winning are at a moderate level. However, Given its RTP rate that is considered to be above-average in the online slots world, players may expect this game to provide an excellent chance of scooping a big win.

In conclusion, the Bollywood Story slot is highly recommended despite not having a progressive jackpot. Even though it only has the necessary features for a slot machine, the high RTP rate is already enough to secure the players some money bags.