The call of the untamed desert is once again heard. There are more duels to be won in the ever-expanding main road.

Dead or Alive 2 Slots is a 5-reel video slot game with 9 paylines and a country theme. Powered by NetEnt, this high variance casino game has an RTP value of 96%. The bonus features include the Wanted Wilds, Shooting Scatters, Free Spins, Big Win Bonus Games, and High Noon bonus.

Did you miss the thrill of winning big bounties?

Discover how to visit the wild west once more with wild symbols, scatters, and bonus games in this Dead or Alive 2 Slot Review January 2022.

From our research, we have created a list of the Best Dead or Alive 2 Sites in January 2022:

About Dead or Alive 2 Slot Game

Five of our favourite moustachioed outlaws, Apache the Kid, Della Rose, Jesse James, Bell Star and Billy the Kid, are back in Dead or Alive 2. The prequel to this game was released in May 2009. It is one of the most popular slot games, never falling out of the top 20.

Dead or Alive 2 is a much-needed update of the original game. This slot game version has the same five-reel, three-row set-up as the first game. Dead or Alive 2 has also maintained the nine paylines.

Dead or Alive 2 takes the player back to the old town road to see a familiar scenario. The reels of the base game are set on the porch of one of the houses on the main road looking out to the rest of the street.

The background of the screen in the base game is a sky painted with the colours of the setting sun. The lower part of the environment is still in yellow. The creeping night is evident in the dark purple clouds and indigo sky in the upper part of the screen.

The borders of the reels are the two wooden posts of the porch. It is also where the paylines are displayed. The top of the reel has the logo of the game in the middle. The posts and beams of the porch are all made of wood.

A classic country tune plays in the background while the reels turn. The tune comes with a distinct metal-clicking sound that accompanies the song. A few notes plucked on an acoustic guitar signal a win.

The bonus game has a different background. The scenario is set inside an old saloon with red drapes. The borders of the reels are still wooden posts and beams with golden bells hanging on either side.

A classic country theme plays in the bonus game. The wilds work the same way for the base game and the bonus game. Depending on the wild that lands on the reels, an accompanying sound effect.

The control panel is placed at the bottom of the screen. It is also designed to look like it is made of wood. All the necessary controls for the game can be found here.

How to Play Dead or Alive 2 Slot Online

To start the heist in Dead or Alive 2, a player has several things to set-up. These are the coin size and the bet level.

If a player plays at the maximum betting level without having to arrange several settings, they can simply click on the Max Bet button. A player can also turn the reels without interruption for several turns by clicking on the Autoplay button.

Dead or Alive 2 Slot is a game with unique interactive features to help a player increase their wins. This game has a wild, scatter, and several free spin features.

During the bonus game, the wanted posters turn into one of the five original outlaws Billy Kid, Belle Star, Jesse James, Della Rose, and Apache Kid. Each of these wild symbols comes with its own sound effects. As a wild, any of these symbols can substitute for the other symbols in the game to complete winning combinations.

The only symbol the Wanted wild does not substitute for is the scatter.

Dead or Alive 2 Slot gives its players a bonus spin round. 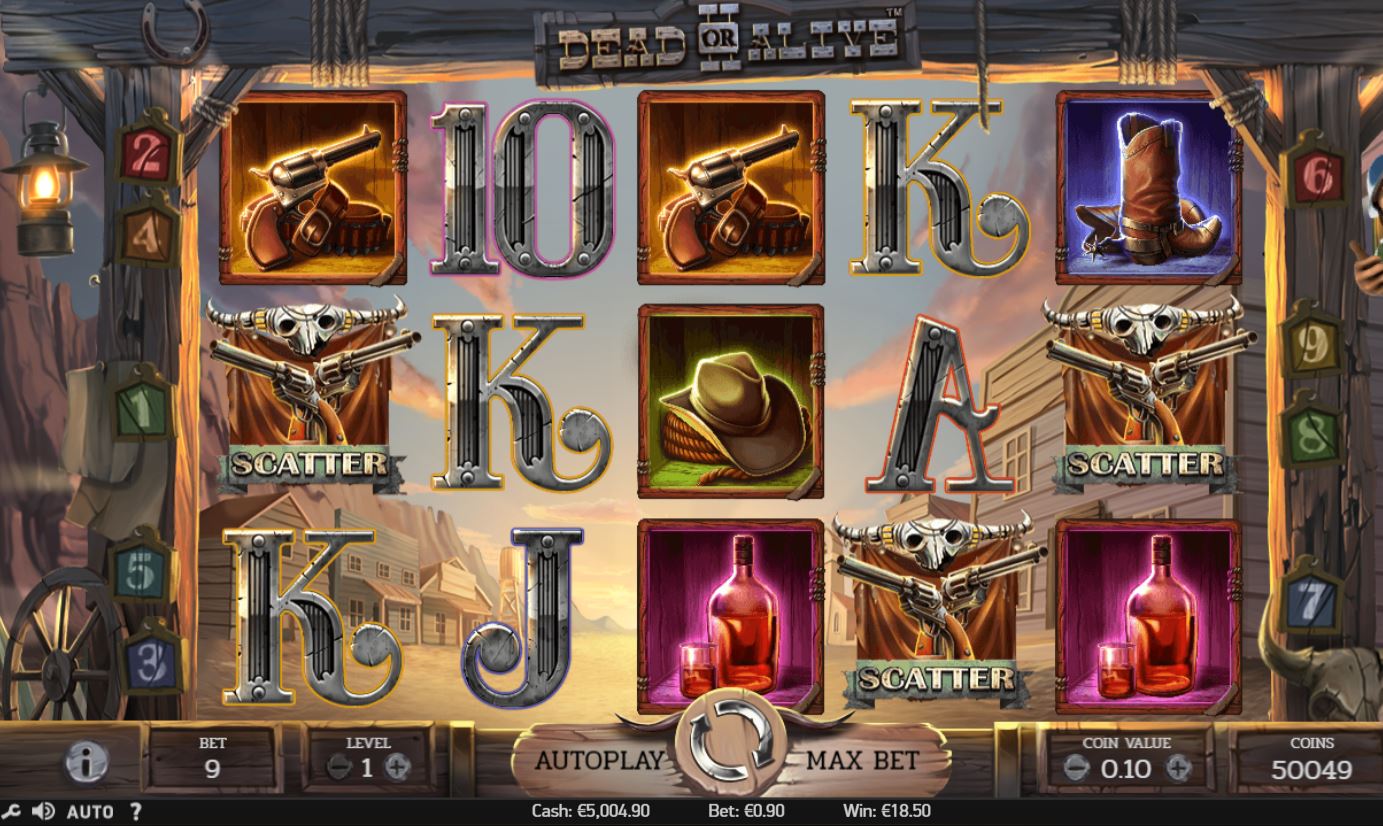 To win at Dead or Alive Slot 2, a player has to line up at least three matching symbols across a payline. The symbols that have low pays are traditional playing cards. The icons with the high pays are the cowboy-inspired images. 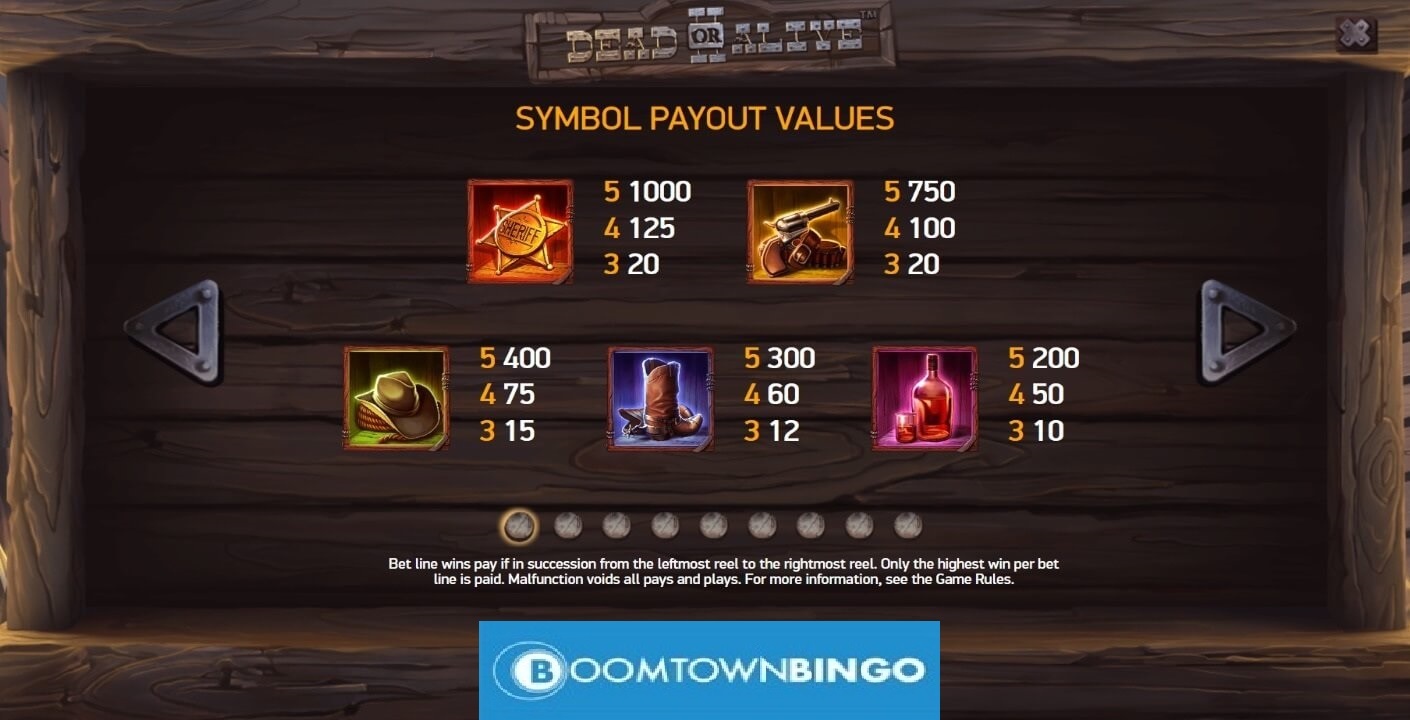 Dead or Alive 2 is a video-based game that is, like the original game, powered by NetEnt.

The first iteration of the game was upgraded to run on HTML5 after the end of the Flash age. As a new release by the development company, Dead or Alive 2 also runs by the same software.

NetEnt started from being one of the smallest companies to evolve into one of the biggest developers in the market.

What is the Dead or Alive 2 Slot RTP?

The RTP rate of Dead or Alive 2 Slot is 96%. The rate is average for a slot game, and a player can expect fair returns when playing.

What is the Dead or Alive 2 Slot Volatility

Dead or Alive 2 also has a high variance. Prepare to play for the long run to receive higher wins.

Dead or Alive 2 is a stake that players will always want to take a chance on. It will lead down the tracks to big wins, especially in the game’s special bonus games.

It does not fail to give the thrill of winning big prizes even with the lowest bets. Including a progressive jackpot will make the game more popular in January 2022. Dead or Alive 2 is a train that players will always want to hop on.