Enter a world filled with tumbleweeds, tall windmills, and saloon bar fights. Face off with famed trigger-happy outlaws and stomp around in your white cowboy boots.

Dead or Alive Slots is a 5-reel video slot game with 9 paylines and a wild west theme. Powered by NetEnt, this high variance casino game has an RTP value of 96% and lets you win over £54,000. The bonus features include Wanted Wild, Shooting Scatters, and the Dead or Alive Free Spins.

Eager to win a bounty’s worth of prizes?

Learn how to shoot the jackpot in a duel using wild symbols, scatter symbols, free spins, and a bonus spins game when you play in this Dead or Alive Slot Review in September 2021.

From our research, we have created a list of the Best Dead or Alive Slot Sites in September 2021:

About Dead or Alive Slot

Dead or Alive gives players the chance to win up to 54,000 coins. It also has a variety of unique interactive features that can help a player increase their winnings.

Dead or Alive is what one would consider a simple game. However, the simplicity of the gameplay elevates the overall quality of the graphics of the game.

This online slots base game has a background that reminds the viewer of the main road in a small dusty desert town in the wild west with Jesse James plotting a train heist. The bright blue sky looks over the city. A house with a lamp, a tall windmill, and distinct dark clouds decorate the reels’ sides.

The bonus game has a different background. It happens against a backdrop of red wooden slots like a local 20th Century Western saloon wall. The set decorates the screen with reminiscent elements of the Wild West, like the silhouette in a picture frame in the upper left corner of the screen.

The reels have borders that are like the wooden railings of an old-school saloon in a lawless town. The logo of the game stays at the centre of the frame on top of the reels. The paylines sits on each side of the reels.

Dead or Alive has symbols that are a mixture of traditional playing card icons and wild west figures. Ambient sounds complete the game atmosphere. The calls of a bird, the howling of the blowing wind, and the dog’s random barking remind one of a stereotypical country scene.

How to Play Dead or Alive Slot Online

There are several things that a player has to do before spinning the barrel of a revolver when playing Dead or Alive. A player can adjust the coin value, the bet level and the number of active bet lines in the game.

Dead or Alive Slot has several interactive bonus features that can help a player win big in the wild west. The game feature are a wild, scatter, and free spin round.

During the Dead or Alive free spins round, the Sticky Wilds feature can be activated. When the Sticky Wild feature is triggered, a wild will remain in the position it landed on until the end of the spin.

Sticky Wilds function the same way as regular wild; as in they can substitute for other symbols to complete a winning combination. Landing one or more Sticky Wilds during the free spins round adds an extra five free spins to the round.

Dead Or Alive Slot gives its players a bonus spin round whenever they play the online slot in a western town. This is the free spins feature. 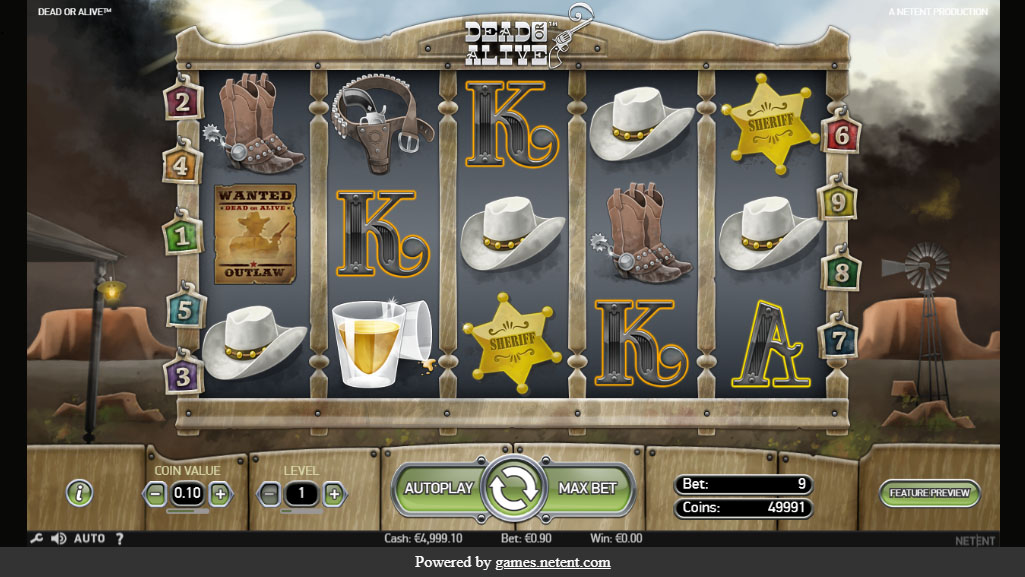 The scatter symbol in Dead or Alive is a symbol showing two revolvers used by the most ruthless gunslingers. Landing three or more of the pistol scatters on the reels activate the Free Spins Feature.

A player receives 12 free spins when the free spins feature is activated as a bonus feature. All the wins during the free spin feature round will be multiplied by 2.

Landing three or more revolver scatters during the free spin re-activates the free spin round awarding the player with more free spins. This re-spin can only happen once per free spin session.

To win at Dead or Alive, a player has to line up at three or more matching symbols across an active payline. The symbols in the game are a combination of traditional playing card icons and cowboy-related items.

The playing card icons are the low-paying symbols in the game. This group of symbols includes the 10, J, Q, K, and Ace.

The high-paying symbols in the game are iconic cowboy items. These symbols include a glass of beer and cowboy boots complete with spurs. There is also a white cowboy hat and a belt with a holster for a pistol.

The highest paying symbol is the golden Sherrif badge. 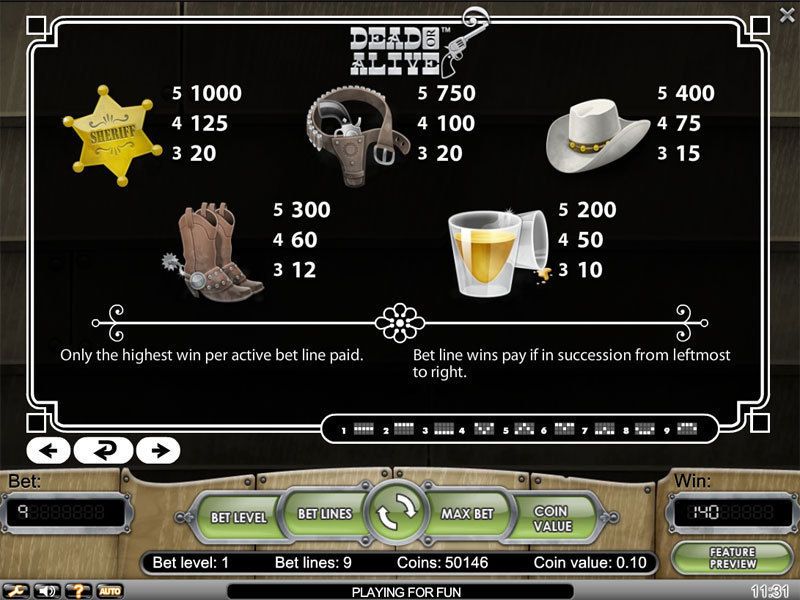 Here are the symbols and the pay they award. For every symbol, the first value displayed is the pay for the three-of-a-kind, followed by the pay for a four-of-a-kind. The last value is the pay for landing a matching symbol in all five reels across an active payline.

Playing at the highest bet levels is the way to get a chance to win the jackpot in the game.

Cash stakes qualify for the slot game. UK players can access the Dead or Alive mobile slot on top UK casinos. Some online casinos award a deposit bonus and bonus funds to players. There is also an online casino that offers a free demo version and a welcome bonus.

This game is regulated by the UK gambling commission. Patrons of the game are advised to play responsibly.

Dead or Alive is a video-based slot game developed by NetEnt. This company started using HTML5 in developing their games to deliver better quality graphics, sounds, and in-game animations.

NetEnt has software that is of the highest standards. The company makes sure that the games they release are all user-friendly.

What is the Dead or Alive Slot RTP?

The RTP rate of Dead or Alive Slot is 96%. This rate is the average for most games, and it promises players ample returns.

What is the Dead or Alive Slot Variance?

Dead or Alive Slot Game is a high variance slot game. The variance encourages players to engage in the game in the long run to win bigger jackpots and bigger cash reward.

Dead or Alive is a fun-packed game. The simplicity of the gameplay, along with its superb graphic design, offers players an improved version of the signature classic slot experience. Including a progressive jackpot will make the game more appealing to a greater audience.

Ride off into the sunset with your side saddle filled with gold when you play Dead or Alive in September 2021.