Ready, get set and spin the reels to win a race on the futuristic streets. Win fast and play with fury as you outwit your opponents to bring home the prize.

Drive: Multiplier Mayhem Slots is a 5-reel slot game with 15 paylines and 3 rows on each reel. NetEnt integrated the Speedy Multiplier Wilds, Silhouette Scatter, and Drive Free Spins in this car-themed, medium variance casino game with 96% RTP along with the £750000 jackpot to help players win more.

Ready to step on the gas to win a major prize?

Discover how to fill your gas tanks enough to finish the car racing in this Drive: Multiplier Mayhem Slot Review in January 2022.

From our research, we have created a list of the Drive: Multiplier Mayhem Slot Sites in January 2022:

The player performs the role of Jette, a badass street-savvy race driver with pink hair. Jette drives around the city racing against three other racers named Twitch, Hamaki, and Bruiser. Put on your favourite black and pink leather onesies and win big prizes when you play Drive: Multiplier Mayhem Slot.

Drive: Multiplier Mayhem is set against a black night sky lit up with blurred city lights in the background. Jette parked her black and pink car at the lower left side corner of the screen. The logo of the game is on the upper left corner.

During the bonus rounds, the background of the screen changes. It is from the inside of Jette’s fast-driving car. Jette’s opponent’s car appears on one side of the screen.

The important game control to play is on the control panel. The bet, bet level, coin value, and the number of coins won is on either end of the panel. The autoplay button, bet max, and the round Spin button are at the centre of the panel.

The symbols on the game are a mixture of traditional symbols and theme-specific icons. An exciting soundtrack plays in the background. A high-pitched speeding sound play when the last reels turn to build tension and excitement.

Check your engines before starting the race. There are some elements that a player can adjust to begin playing the game in their terms. These elements are the coin value and the bet level.

Drive: Multiplier Mayhem has a handful of special interactive features that help a player win bigger jackpots. The game has a wild, scatter, and a bonus round.

The wilds in Drive: Multiplier Mayhem are Multiplier Wilds. There are five different multipliers with different values. It can be speedometer with an x1, x2, x3, x4, and x5. Whenever one symbol complete a winning combination, the multiplier of the wild applies to the winnings of that combination.

Landing two or more multiplier wilds across a payline means the multipliers will also multiply.

A new symbol, the Nitro, is added to the reels in the bonus game. To complete a level, the player has to collect a set number of Nitro symbols.

A Nitro symbol can be collected if it appears anywhere in the three middle reels. The collected Nitros are stored and counted in the meter at the left side of the reels.

To win at Drive: Multiplier Mayhem, a player has to land a combination of matching symbols along an active payline.

The game has 15 fixed paylines, and with five reels, Drive: Multiplier Mayhem offers a player with many opportunities to win.

The symbols in the Drive: Multiplier Mayhem Slot are a combination of traditional and contemporary icons. The lower-paying symbols are the traditional playing card symbols. This includes 10, J, Q, K, and the Ace.

Twitch is the guy in the black hood and blue binoculars while Hamaki is the one smoking a cigarette. Bruiser is the muscled guy with gloves, cracking his knuckles, ready for action. 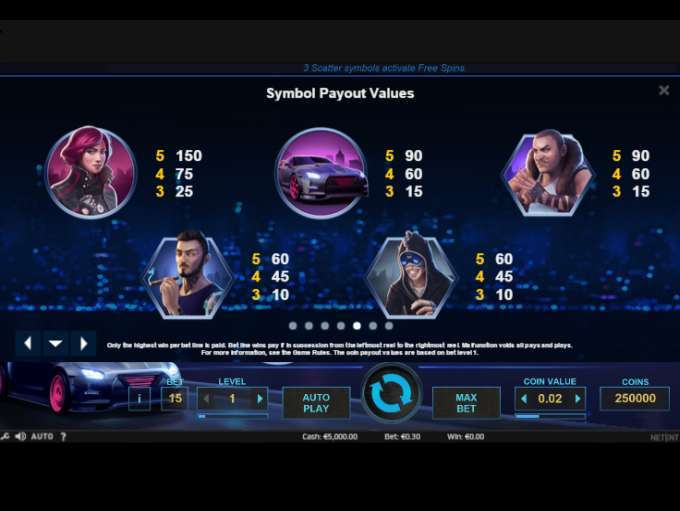 Playing at the highest stakes can award a player up to 180,000. The multiplier wilds feature also helps grow winnings even further.

The game is a video-based slot powered by NetEnt.

Drive: Multiplier Mayhem runs on HTML5 by NetEnt. This means the game offers a super visual and audio graphic experience to its players. It also means that the animation and transitions of the game are relatively smoother when compared to older games.

What is the Drive: Multiplier Mayhem RTP?

The RTP of Drive: Multiplier Mayhem is 96%. This rate is higher than the current market standard.

What is the Drive: Multiplier Mayhem Slot Variance?

Drive: Multiplier Mayhem Slot has a medium variance. This means that a player can expect to land wins throughout the duration of the game.

Drive: Multiplier Mayhem is built to be a classic. The beautiful visual and sound graphics help make the game stand out. The bonus game is fast and exciting, successfully imitating the thrill of racing against an opponent in the streets.

The multiplier wilds significantly increase the chance to land a winning combination.

Including a progressive jackpot in the game can increase the game’s popularity. At the end of the day, Drive: Multiplier Mayhem Slot is a fun game to try in January 2022 with an adrenalin kick.