Journey through outer space and discover the power of nature in January 2022.

Make your way between rocky asteroids and burning comets to find the biggest prize and defeat the robot aliens that come after you. Can you collect all the elements on time?

Be awakened and experience an adventure as vast as the universe filled with wild symbols and elemental features in this Elements: The Awakening Review.

From our research, we have created a list of the Best Elements: The Awakening Slot Sites in January 2022:

About Elements: The Awakening Slot

Elements: The Awakening has five reels and three rows. The game has 20 active paylines. It was released in November 2013.

Elements: The Awakening is a game that delivers much visual satisfaction. A unique thing about the game is the way the symbols are released. Instead of “spinning”, the symbols in the game fall into place.

A dramatic clip opens the game as a lone blue comet orbits the logo of the game. The welcoming theme can send chills down your back and goosebumps through your skin. The futuristic feel is consistent throughout the game.

The game control panel is placed at the bottom of the screen. It carries the futuristic feel of the game, with solid metal borders and spikes. All the necessary buttons and information to play the game can be found on the control panel.

An ethereal theme plays in the background as the tiles fall into place. The symbols that form a winning combination sparkle and are collected into the diamond spin button.

The different bonus games each have their own prelude. The four elements are introduced in an awe-inspiring yet borderline terrifying animation showing them awakening. Each bonus game also has its own background and unique control panel design.

How to Play Elements: The Awakening Slot Online

To awaken all the elements in the slot, the player has several things that they have to adjust first. These are the coin value and the bet level.

Elements: The Awakening has several interactive features that help the player rouse the elements. These are four different bonus games and a wild feature. 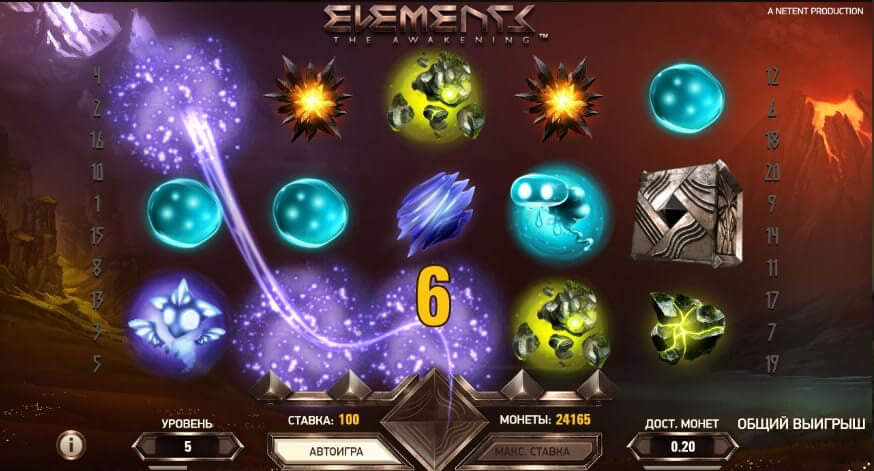 The wild in the game is a metallic box. The wild can only appear on the second, third, fourth, and fifth reels. The wild can substitute for all the other symbols in the game to complete a winning combination in both the base game and the bonus rounds.

The wild symbol always pays the highest winning combination on a payline.

Elements: The Awakening symbols in the game fall into place through an avalanche. Every time a winning combination is completed, the symbols explode, and another set of symbols take their place. For every consecutive avalanche of symbols with at least one win, the Avalanche meter at the side of the reels increases by 1.

The avalanche of symbols continues until there are no more winning combinations.

Air Storm. Two Air Storm Wild symbols fall into the reels at random when this feature is activated. These symbols stay in place throughout the whole round. Ever time a fall or an avalanche occurs, the two wilds move to a new adjacent position.

Earth Storm. The wilds during the Earth Storm feature can only appear on the middle three reels. These Earth Storm wilds stay in place until they have been included in one or more wins across a payline or in three avalanches.

Fire Storm. The Fire Storm wild can appear on the second, third, and fourth reels. The Fire Storm Wilds can reach out to any direction transforming any two neighbouring symbols into wilds.

The Autoplay option lets a player spin the reels for several turns without interruption. A player selects the number of turns they want to spend the reels spinning.

Elements: The Awakening Slot does not have a bonus spin round.

To win at Elements: The Awakening, a player has to line up three matching symbols across a payline. The symbols in the game are extraterrestrial creatures and items.

Among the low-paying symbols, the blue orb pays the lowest, followed by the purple orb. The next orb to pay higher is the green one. The orb that pays the highest in the game is the red orb. 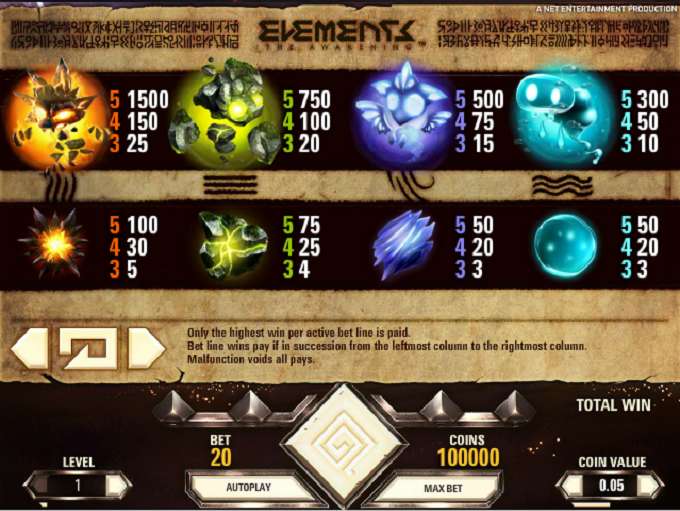 Playing at the highest bet possible maximizes the chances of winning the jackpot of 300,000.

Elements: The Awakening was a development by the gaming giant NetEnt. Most of the NetEnt games released have innovative game designs. The software provides the game with great audio and visual effects.

As with most games similar to it, Elements: The Awakening also has exciting bonus games. It also has modern special features that instantly elevate the game.

What is the Elements: The Awakening Slot RTP?

Elements: The Awakening has an RTP rate of 96%. This rate is higher than the current market average for slot games.

What is the Elements: The Awakening Slot Variance?

Elements: The Awakening Slot has a low to medium variance. This variance range means a player can expect to land low to regular wins often in the game.

The Elements: The Awakening graphics and animation are top-notch. The fact that the slots fall into place instead of spinning makes it memorable in January 2022 . The game was very well-thought of. The unique theme and execution couple with the amazing win potential, make the game a certain classic.

Including a progressive jackpot in the game can make it more appealing to more players. Elements: The Awakening is an enchanting game that takes you out of this world.