Visit the palace to seek an audience with King. On the trip there, find great treasures that the King will bestow upon you in January 2022. Will you become a wealthy subject in the King’s court?

King of Slots is a 5-reel, 25 payline, online video slot game, with a medium variance. The Royal themed casino game is powered by NetEnt and has an RTP of 97%. Bonus features, such as Blue Diamond Wilds, Purple Gem Scatters and the Sticky Wins Feature, can help you win up to £750,000 in real money!

Discover how to become wealthy as royalty with wild symbols, scatter symbols, and a free spins round in this King of Slots Review.

From our research, we have created a list of the King of Slots Sites in January 2022:

About King of Slots

Kings of Slots is a game with five reels and three rows. It works around 25. The game was released in late 2015.

The game has many special features that make it appealing to the player market. It has the Autoplay option, Wild symbols, and even multipliers. These special features, along with its unique reels set-up, make King of Slots an exciting game to take a chance on.

King of Slots has very modern audio and visual designs.

Each of the tiles on the five reels is animated to spin on its own. The outer borders of the reels are surrounded by purple neon lights while the game logo sits on top. The 25 paylines of the game are represented by tiny green dots on either side of the reels.

The control panel of the game is at the bottom of the screen. This holds all the essential information and necessary buttons to play the game. It is highlighted in a bright blue neon colour.

The King of Slot symbols is a mixture of fruits, playing card icons, and the King’s crown. A jazzy tune plays continuously plays in the background with the occasional pop of a celebratory song. The tiles that formed winning combinations light up with a royal purple colour.

How to Play King of Slots Online

There are several things that a player has to prepare before meeting the King. These are the coin value and the bet levels.

King of Slots is optimized to be playable in different screen sizes, tablets or mobile phones. The King of Slots game is compatible with both Android and Apple devices. 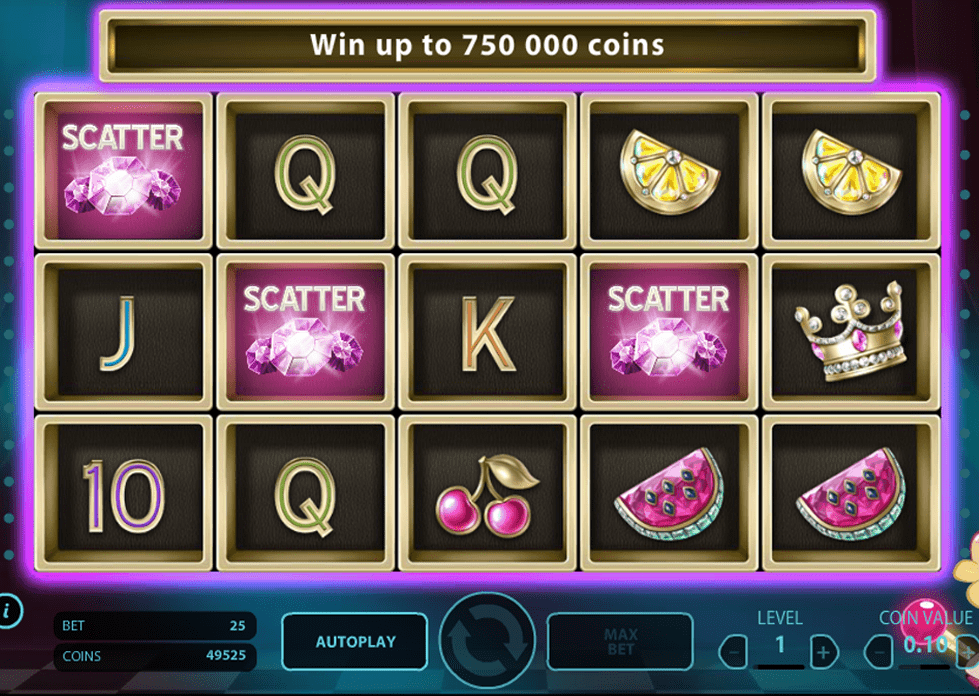 King of Slots has several special features that can help players win bigger prizes. The game has a wild symbol; a scatter symbol, a free spins round, and a sticky wins feature.

What Symbol Trigger the King of Slots Bonus Free Spins?

King of Slots gives its players a bonus spin round. 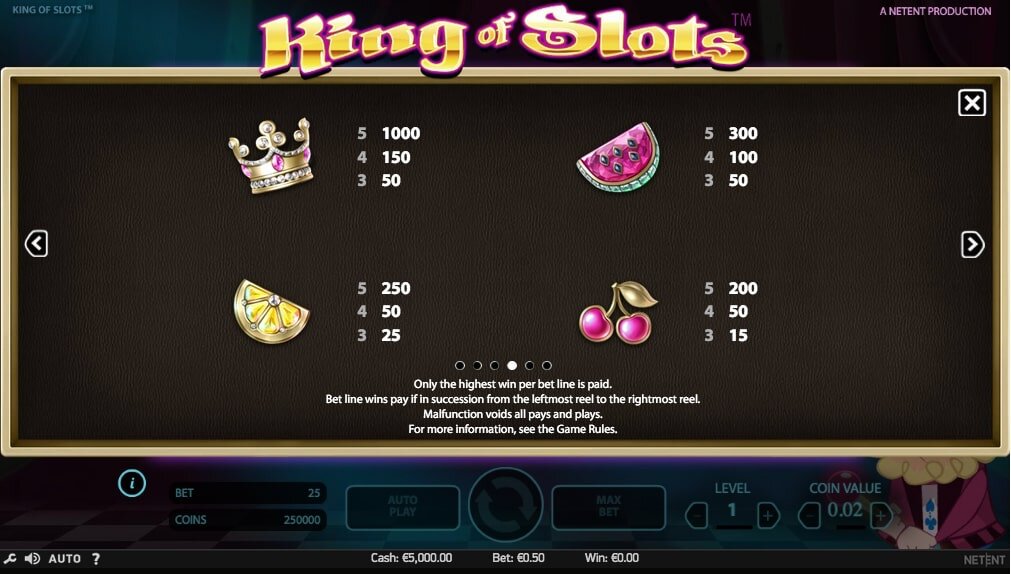 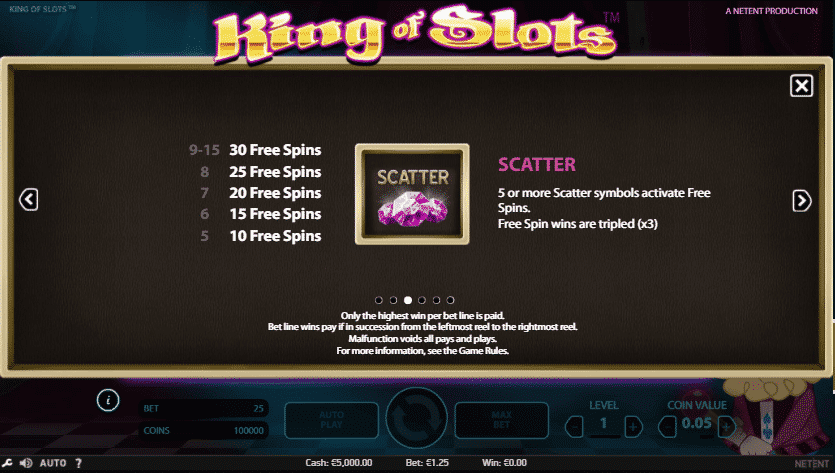 To win some gold from the King’s treasury, a player has to line up at least three matching symbols across a payline. The winning combination has to start from the leftmost reel to the right.

The low-paying combinations in the game are traditional playing card icons. This includes the 10, J, and Q. It also includes the K and the Ace.

Most of the icons with higher pay rates are the fruits made from jewels. It includes Cherries, Lemons, and Watermelons. The highest paying symbol in the game is the Golden Crown.

King of Slots is a vide-based slot game. It was developed by the company NetEnt. The game was released in 2015, but it will be a part of NetEnts migration to HTML5.

NetEnt has established its reputation as a game with high-quality security. The company also uses the latest technology to protect the date of its users.

What is the King of Slots RTP?

King of Slots has an RTP rate of 97%. The rate means that a player can expect high returns from the game.

What is the King of Slots Variance?

King of Slot is a game with medium variance. The medium variance gives players more chances to land small jackpots more often in the game but also gives the chance to win less common larger jackpots.

King of Slots is an entertaining game with exciting features in January 2022. The sticky wins feature is a unique find that can be of great help to a player when activated. The graphics of the game helps significantly in building the ambience, but the soundtrack can be very distracting.

Including a progressive jackpot in the game can make it more appealing. All in all, the King of Slots game is a certified slot royalty.