Join the Koi Princess and visit the orient in January 2022. Face roaring waves, meet cute dragons, and collect lucky gold coins. Are you ready to go on an adventure with the Koi Princess?

Koi Princess Slots is a 5-reel, 20 payline, online video slot game, with an Anime theme. Developed by NetEnt, this medium variance casino game has an RTP of 96%. Free Spins, 5-Hit Random Feature and Wave Wilds can help you win up to £5,000. There is a minimum bet of 20p and a maximum bet of £400.

Read more about how to win golds along the way with wild symbols, free spin rounds, and bonus features in this Koi Princess Slot Review.

From our research, we have created a list of the Koi Princess Slots Sites in January 2022:

Koi Princess is a game with five reels and three rows. It runs on 20 paylines. The game was released in November 2015.

The game is based in Asia with anime-themed illustrations inspired manga publications . It has many special features that help a player win big prizes. This includes wilds, multipliers, and even free spins.

Koi Princess illustrations are inspired by anime. The colours of the game are in bright pastel colours. Bamboo sticks are also featured prominently in the game.

The background of the game is out in a garden with pink cherry blossoms and a lake. A temple looks over the scene from the upper left corner of the screen. The right side of the reel is dominated by a majestic waterfall.

The control panel is at the bottom of the screen. All the essential information and necessary buttons to play the game are on the control panel. The buttons are in green textured buttons.

The icons of the game are iconic Asian illustrations and playing card symbols. A traditional oriental song plays on the background while the game is ongoing. The symbols that form a winning combination on the reels are animated and highlighted by lightning.

There are several things that a player has to set up before gathering wins with the Koi Princess. These are the Bet Level and the Coin Value.

Koi Princess is designed to be playable on tablets and mobile phones. It is compatible with both Apple and Android devices.

The Koi Princess equips the player with different special features to help them get the chance to win bigger prizes. These Koi Princess features include a wild symbol; a scatter symbol and a free spins round. Koi Princess also has a bonus game. 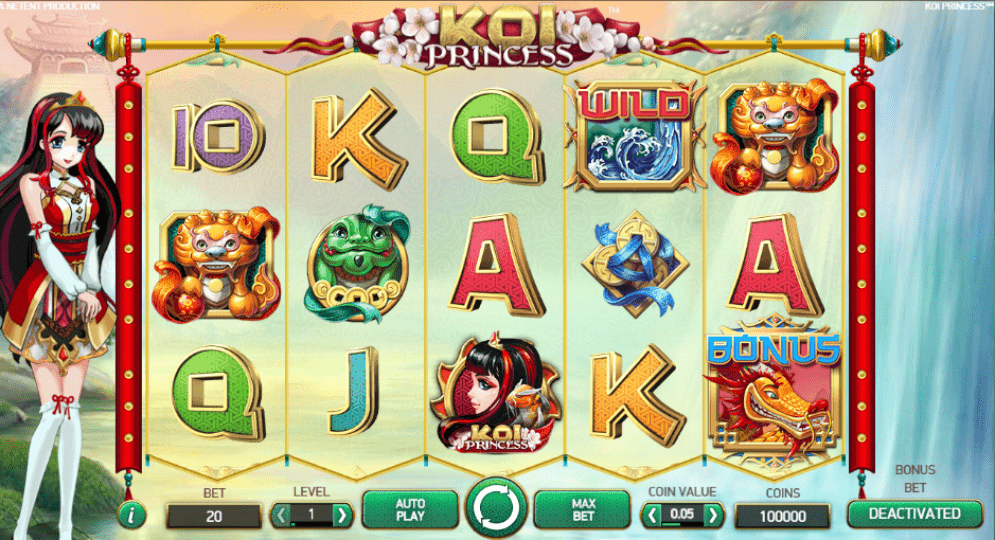 Landing two matches will pay four while a three-of-a-kind combination pays 100. Lining up four matching wilds will pay 300 while a matching wild on all five reels pays 500.

Koi Princess Slot gives its players a bonus spin round.

This is 20 coins times the bet level for standard mode. If the bonus bet is activated when this feature is triggered, it is 40 coins multiplied by the bet level.

To win at Koi Princess Slot, a player has to line up at least three matching symbols across an active payline. 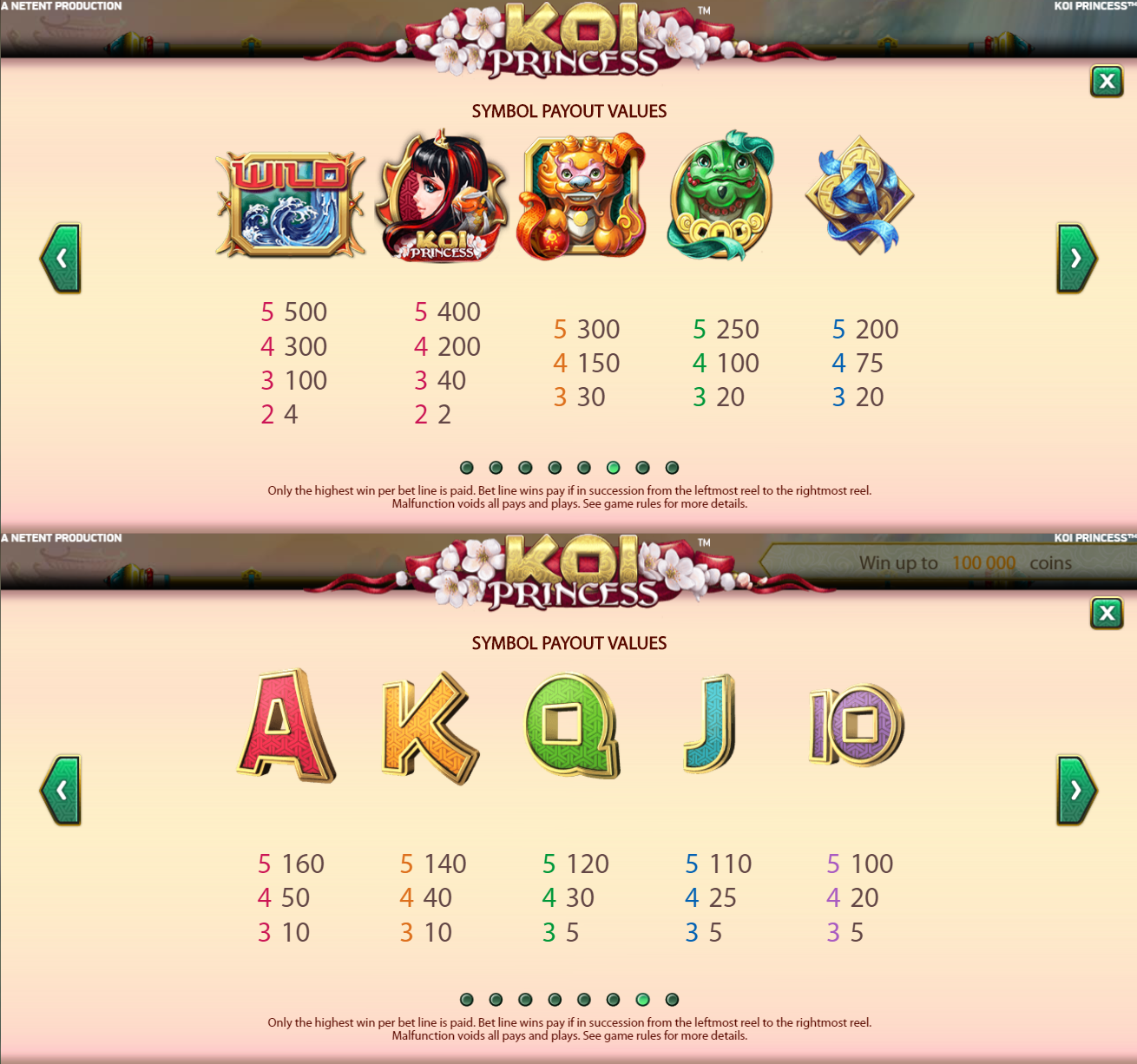 The low-paying icons on the game are traditional playing card symbols. The symbols are designed in textured font with gold borders. This includes 10, J, Q, K, and the Ace.

The symbols with the higher pay rates are different oriental items illustrated like an anime. There are gold coins and a red dragon idol. This also includes a green jade idol and the Koi Princess herself.

Here are the symbols arranged from the lowest payer to the highest payer. The first value beside each Koi Princess symbol is the pay for completing a three-of-a-kind, then followed by the pay for a four-of-a-kind. The last value is the pay for landing a matching symbol in all five reels.

Koi Princess is a video-based slot game. It is a development by the company NetEnt. This game will be shifted to new software as part of NetEnt’s migration to HTML5.

NetEnt owns a vast network of progressive jackpots. The company has started from humble beginnings, but they have now come a long way as one of the best game providers in the industry.

What is the Koi Princess Slot RTP?

Koi Princess Slot has an RTP rate of 96%. This rate promises players with high returns whenever they play the game.

What is the Koi Princess Slot Variance?

Koi Princess has many exciting bonus games and additional base features. The graphics are cute, but the soundtrack can be distracting. Having many chances to win makes it a worthy game for all players of different budget ranges in January 2022.

If the player includes a progressive jackpot in the game can make it more popular. The Koi Princess is a game that will give you an immense fortune.