Excavate a lost civilization and study their culture and way of life. Stumble upon ancient chambers and prehistoric relics along the way in January 2022. Can you brave these foregone ruins to bring home gold coins?

Lost Relic Slots is a mystery adventure low variance slot game powered by NetEnt software. There are 5 reels and cluster paylines and a jackpot of £1000 and a max win of x1000 the players bet spin. The RTP is 96.30%, if the player lands three scatters this triggers a free spin bonus game.

Learn how to make the most of your journey through the unearthed city with bonus features, wild symbols, scatter symbols, and free spins round in this Lost Ruins Slot Review.

From our research, we have created a list of the Best Lost Relic Slot Sites in January 2022: 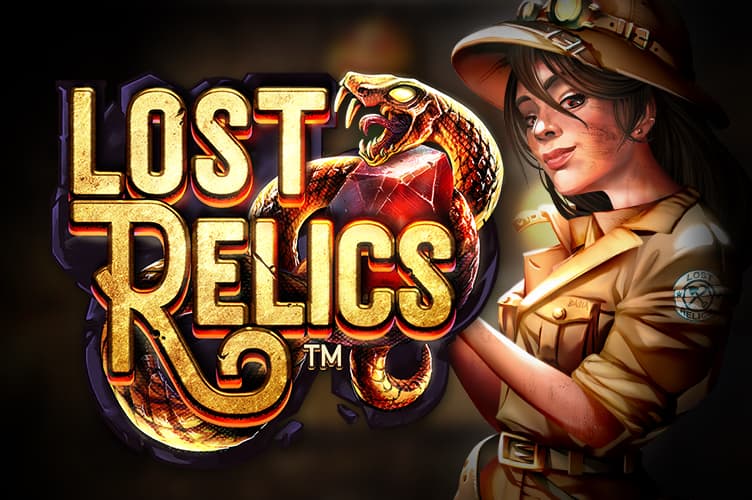 Lost Relic is a game with five reels and five rows. Instead of using paylines, the game uses the Cluster system. NetEnt released the Lost Relic Slot on the 24th of May, 2018.

Successful archaeological expeditions inspired lost Relic. The game has many special features that can help a player dig up more treasure. The highest jackpot in the game is a staggering 6000.

The theme of Lost Relic is evident in the visual and audio graphics of the game.

The control panel of the game is at the bottom of the screen. It has a black translucent background with the buttons in plain white. All the important information and the necessary buttons to play the game are on the control panel.

The symbols in the game are playing card suits and ancient relics. A hopeful and encouraging tune plays as the game plays. The tiles that form winning clusters on the reels highlight with a counter flashing to show the wins.

For a player to start digging up gold wins in Lost Relic, there are several things a player has to set-up. These game settings are the coin value and the bet level.

Take the adventure with you in your pocket. Lost Relic is fully optimized to be playable on tablets and mobile phones. The game is compatible with both Android and Apple devices.

The base game has a different set of special features. These are the Extra Coin, Extra Wild, Extra Scatter, and the Free Spins.

Landing a winning cluster on a spin can activate up to five instances of three random features. The features are activated when the reels stop before a player receives pay for the wins.

There may be up to 15 wilds on the reels because of this feature. The Extra Wilds may be part of more than one winning cluster of any symbol. 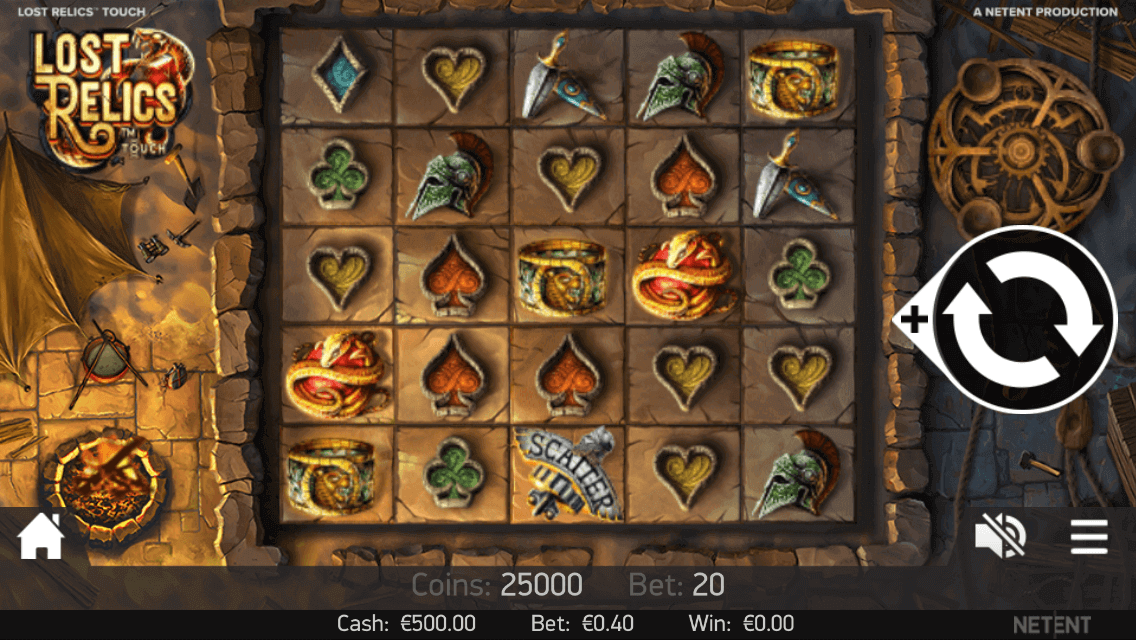 Lost Relics Slot gives its players a bonus spin round.

There are three different hidden chest sizes which are small, medium, and large. The first two chests that a player gets are either small or medium. The succeeding chests are randomly chosen from the three.

To win at Lost Relic, a player has to complete a cluster of at least six or more matching symbols on the reels. A cluster forms if matching symbols are horizontally or vertically adjacent to each other.

The low-paying icons in the game are the traditional playing card suits. The lowest paying icon is the blue diamond, followed by the green club. Next is the yellow heart then comes the red spade.

The symbols with higher pay rates are the ancient artefacts unearthed from the ruins. First comes a pair of blue daggers followed by the greek soldier’s helmet. There is a green and gold ring, then the red jewel with a golden snake wrapped around it.

Lost Relics does not have paylines. It awards wins whenever a player forms a cluster on the reels. The lowest number of matching symbols needed to form a cluster is six, while the highest number of symbols is 25.

The lowest possible win a player can get is by landing a cluster of 6 blue diamonds on the reels. This cluster awards a player with 2. The cluster combination that awards the highest jackpot of 6000 is a cluster of 25 red jewels or a cluster of 25 green and gold rings. 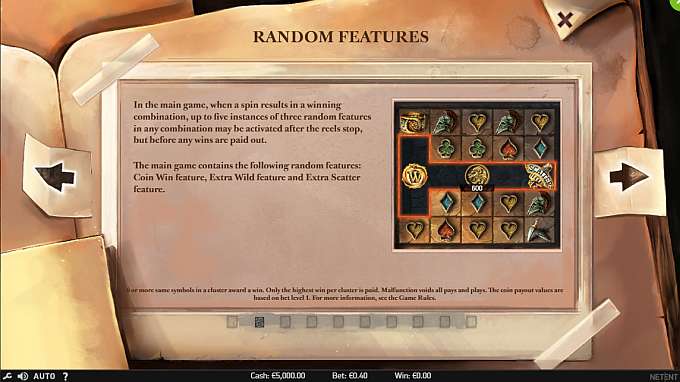 Lost Relic is a video-based game powered by the gaming company NetEnt. The slot game release was in early 2014, but it migrated to run on HTML5 as part of NetEnt’s migration.

The game is in the Instant Play format. Instant Play means that a player does not have to download any software or application to play the Lost Relic Slot. The Lost Relic can be played directly on the host website.

What is the Lost Relic Slot RTP?

Lost Relic Slot has an RTP rate of 96%. This rate is higher than the current rate average in the slot market.

What is the Lost Relic Slot Variance?

Lost Relic has beautiful animation and visual graphics. The soundtrack is gripping and suspenseful. The win potential in the game in the game is average with the highest potential being 300 times the players bet.

It has many fun features that offer variety and excitement in both the base game and the free spins round. Adding a progressive jackpot to the Lost Relic Slot can make it more appealing to a wider audience in January 2022. Lost Relic is a game that will give players the thrill of an adventure.