Jump into a world where humans are no longer the top species. Make your way through the ruins and the rubble as the war between the humans and the ape’s ravages on. Will you be the hero to the humans while winning big prizes?

Planet of the Apes Slots is a 10-reel, 40 payline, online video slot game, powered by NetEnt. The medium variance casino game has an RTP of 96.33% and has a Movie theme. Look out for bonus features, like Caesar Scatters, Gold Wilds and Red Wilds, which can help you win up to £600,000 in real money!

Learn how to rise above the struggles and win back the earth when using wild symbols, scatter symbols, bonus features, and a free spins round in this Planet of the Apes Slot Review in July 2021.

From our research, we have created a list of the Best Planet of the Apes Slot Sites:

About Planet of the Apes Slot

Planet of the Apes is a game with an amazing 10 slots and three rows. It has a total of 40 paylines. The game was released on the 23rd of October 2017.

This movie themed slot game is one of the best from NetEnt and comes with a lot of familiar features and characters from the famous films.

Planet of the Apes has two sections, the Rise and the Dawn. Each section has its own several special features that can help a player win bigger prizes. The highest jackpot in the game is 1000.

Planet of the Apes has a very dystopian visual and audio design. The game is aligned with the theme of the movie it was based on.

The game splits the screen into two sections labelled the Rise and the Dawn. Each section has a distinct illustration.

At the right half of the screen, the Dawn section is the stark opposite of the Rise. The colours in this half are dark and cool. The symbols have a red border that looks like blood and gives an ominous feel.

Symbols in this game includes characters such as Caesar, Caesar’s Attic Window Symbol, Koba Symbol, For Rise and For Dawn.

How to Play Planet of the Apes Slot Online

To start the uprising against the apes, a player has to set up several things in the game. These are the bet levels and coin values.

A bet level is the number of coins a player places as bets on each payline. The bet levels can be set using the arrow buttons on the left side of the control panel. The bet level ranges from as low as 1 to as high as 10.

Rise up to the challenge and face the dawn of a new tomorrow even on the go. Planet of the Apes is fully optimized to be playable on tablets and mobile phones. It is compatible with both Apple and Android devices.

Planet of the Apes Slot has several special features that help a player win bigger prizes in the game. This includes a wild symbol, a scatter symbol, and a round of free spins. 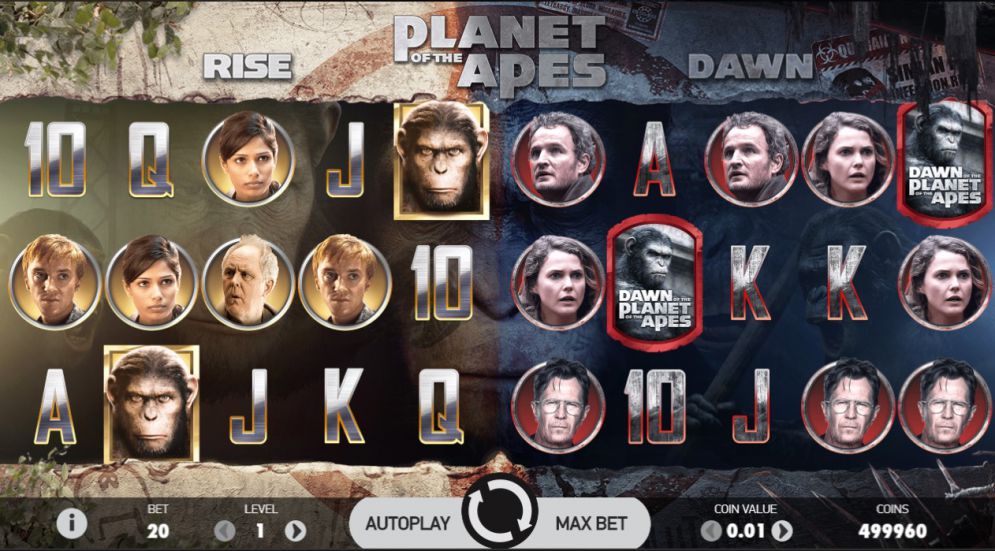 Lining up matching wild symbols on the reels also pays.

In this feature, the game awards a player with added coin wins for every human and ape symbol appearing on the Rise section. The coin win is paid on top of the payline wins on the reels when the feature is triggered.

When this feature is activated, all the ape and human symbols in the Dawn section are transformed into the same symbol.

What Symbol Trigger the Planet of the Apes Slot Bonus Free Spins?

Planet of the Apes Slot gives its players a bonus spin round.

When the Rise Free Spins is triggered, the game awards 10 free spins to the player.

During the Rise Free Spins Round, all the Wilds that land on the reels are collected. On the last spin, all collected Wild symbols are randomly placed on the reels.

During the Dawn Free Spins Round, a player can collect 3 extra symbols. These are Multiplier, Extra Wild and Extra Free Spins. Each of these collect symbols has a corresponding meter.

Whenever one of these extra symbols land on the reels during the Dawn Free Spins round, the corresponding meter is filled up by 1. When a meter is full, the feature activates.

Each section has five reels where section specific symbols can complete winning combinations. The symbols in the Rise of the Planet of the Apes are cleaner and look more hopeful. In contrast, the icons in the Dawn of the Planets of the Apes look battle-worn and battered. 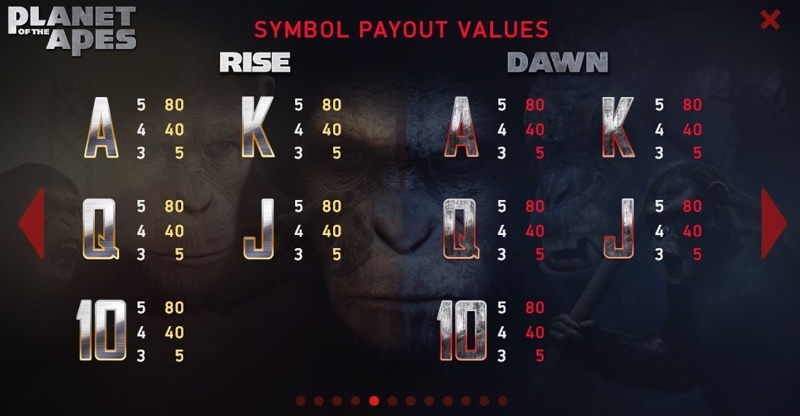 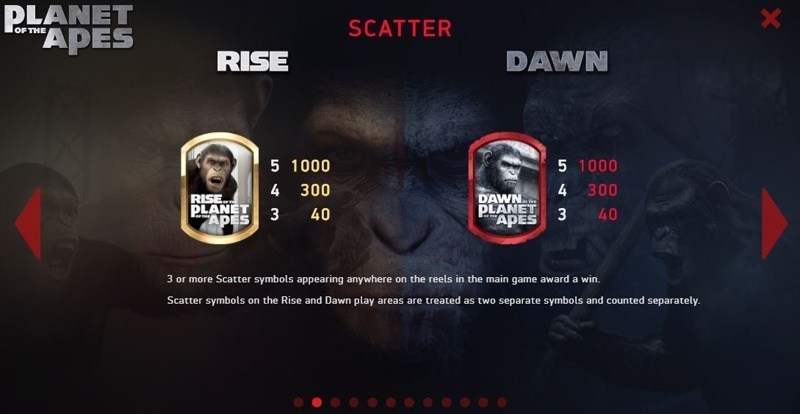 Here are the pays for the symbols in each of the sections arranged from the lowest to the highest payer. The first value beside the symbol is the pay for a three-of-a-kind followed by the pay for a four-of-a-kind. The last value is the pay for lining up five matching symbols across a payline.

Planet of the Apes is a game developed by the company NetEnt.

NetEnt are one of the biggest software providers in the industry and are recognised by many within the sphere. They specialise in movie-based games and other vibrant gameplay.

You can find other exciting NetBet movie theme films such as Superman The Movie Video Slot and Jumanji Slot.

What is the Planet of the Apes Slot RTP?

This rate is higher than the standard rate in the market, with the average RTP being 95%. The Return to Player percentage offers a good idea of how likely you are to win. Slots players can enjoy this generous RTP as it averages 96.33 winning spins out of 100.

What is the Planet of the Apes Slot Variance?

Planet of the Apes Slot is a game with medium variance.

The medium variance means a player can expect to land regular wins consistently throughout the game. Not only that, it offers middleground, allowing slots players to also play for big, real money wins too.

Planet of the Apes takes the player into an immersive game experience. The graphics and animations are impressive. The combined play sections of the Rise and the Dawn with their respective features offer players many chances to win big prizes.

Including a progressive jackpot to the game can make it more popular. Coupled with the RTP rate, Planet to the Apes is a game worth playing.