Squeeze the day with different fruits and the rewards that come with each one. Will your harvest be bountiful in every round in January 2022?

Power Stars is a 5-reel, 10 payline, online video slot game, powered by Novomatic. This medium variance casino game has an RTP of 95.54% and a Retro Fruit theme. Bonus features, alike to Golden Star Wilds and Star Sticky Wilds, can help you win up to 10,000 coins. Look out for the Autoplay Feature!

Find out how much power you can get from these fruits with wild symbols and sticky wild features in this Power Stars Slot Review.

From our research, we have created a list of the Best Power Stars Slot Sites in January 2022:

Power Stars Slot is a game with five reels and three rows. The game has a total of 10 activatable paylines and was the game was initially released on the 15th of June 2008.

Power Stars Slot has a couple of special features that can come in hand in earning big rewards during the round. The highest Power Stars Slot jackpot a player can win is 1000.

The game is set against a sparkling red background. The Power Stars Slot logo is on top of the reels. Numbered rectangles in different colours representing the paylines are on either side of the reels.

All the pertinent information and game buttons to play the Power Stars Slot are on the game control board at the lower part of the screen.

Different fruits and classic slot machine icons serve as the symbols in the game.

Power Stars Slot is fully optimized to be playable on tablets and mobile phones. The game is compatible with both Apple and Android devices.

To win at Power Stars Slot, a player has to line up at least three matching symbols across an active payline. 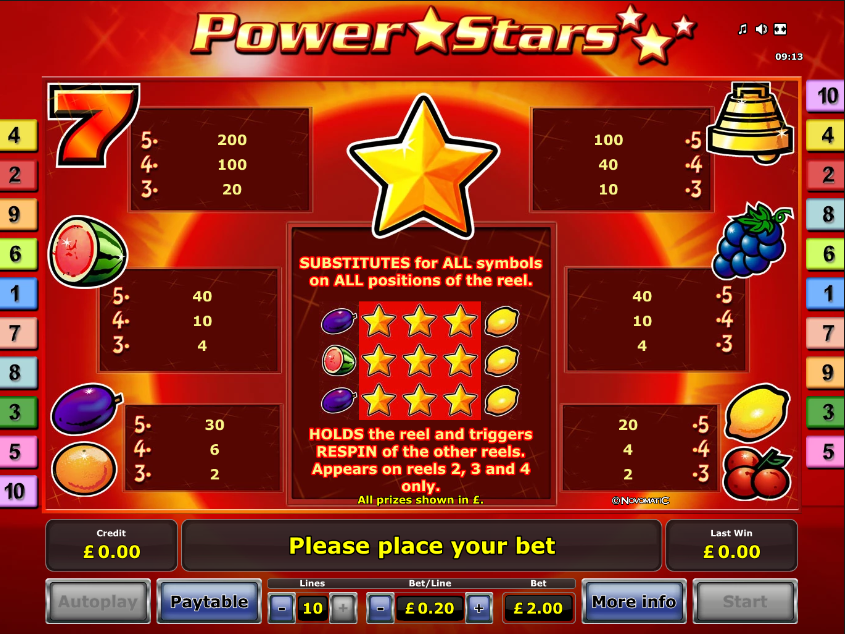 Only the highest paying winning combination per payline will be paid.

A winning combination has to formed from the leftmost reel to the rightmost reel or vice versa.

Power Stars Slot has a couple of special features that can help a player earn more prizes. 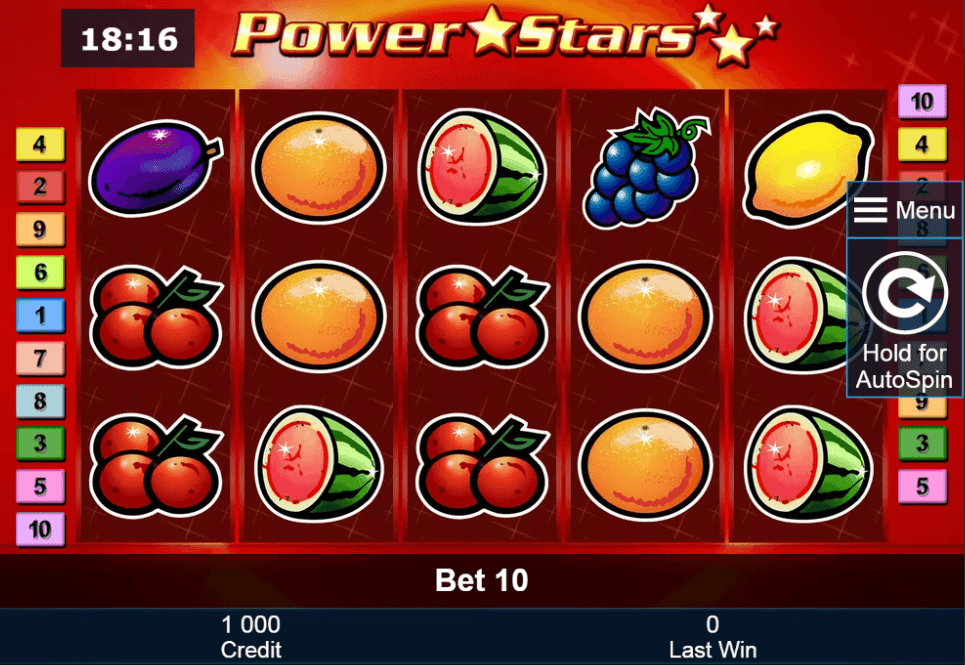 Power Stars Slot is a video-based game powered by Green Tube. Green Tube is the interactive division of the gaming company Novomatic.

Novomatic has an established global reputation that is very impressive. They have found an audience that will surely patronize their products.

What is the Power Stars Slot’s RTP?

The RTP of Power Stars Slot is 95%. This rate is lower than the average of most slot games in the market, but the game still awards decent wins.

What is Power Stars Slots Variance?

Power Stars Slots has a medium variance. This assures a player a consistent flow of average wins throughout the game.

Power Stars Slot is a compelling take on the classic fruit slot machine. The graphic presentation is inviting, and the RTP rates are encouraging to players in January 2022. The special features of the game also up the ante.

Adding a progressive jackpot will make the game more popular. These things considered, Power Stars Slot is a game worth your time.