Pick your way through the greenery to safely encounter the majestic giant lizards that roam the Earth. Will you find the big wins in July 2021with the help of the dinosaurs?

Raging Rex Slots is a 6-reel, 4,096 payline, online video slot game, powered by Play ‘N Go. This high variance casino game has an RTP of 96.34% and a Prehistoric Dinosaur theme. Bonus features, like Raging Rex Wilds, Meteor Scatters and the Wild Hunt Bonus, can help you win up to 5,000x your stake!

Learn how to win the jackpot of the game with wild dinosaur symbols, meteor scatter symbols, bonus features, and a free spins round in this Raging Rex Slot Game Review.

From our research, we have created a list of the Best Raging Rex Slot Sites in July 2021:

Raging Rex Slot is an action and adventure-themed slot game that is set in pre-historic times that draws inspiration from the life of the dinosaurs who once roamed the earth and of the most vicious dinosaur of all, the Tyrannosaurus Rex.

Raging Rex Slot is a video-based slot-type game with six reels and up to 4 lines for each of the reels. Play ‘N Go released Raging Rex Slot on the 10th of January, 2019.

The game is set in the jungle under the thick foliage. The colour schemes in the Raging Rex Slot are in deep, rich shades of greens, purples, oranges, and blues.

The game transitions and animations in the game are seamless. All the symbols that form winning combinations are highlighted. The different visual and audio elements in the game complete the ambience.

To start playing the Raging Rex Slot, a player has to set up the game.

The Raging Rex Slot is fully optimized to be playable on a desktop computer, on tablets, and on mobile phones.

The high paying symbols in the Raging Rex Slot are the dinosaurs. This includes a Saurolophus, a Triceratops, and a Dilophosaurus. The highest paying dinosaur symbol resembles a Yutyrannus Huali.

The Rampage feature ends when the Raging Rex reaches the first reel.

To win at Raging Rex Slot, a player has to match three to five symbols in one spin across an active payline. The paylines are fixed and award the highest combination. The Raging Rex Slot only pay one-way, from left to right. 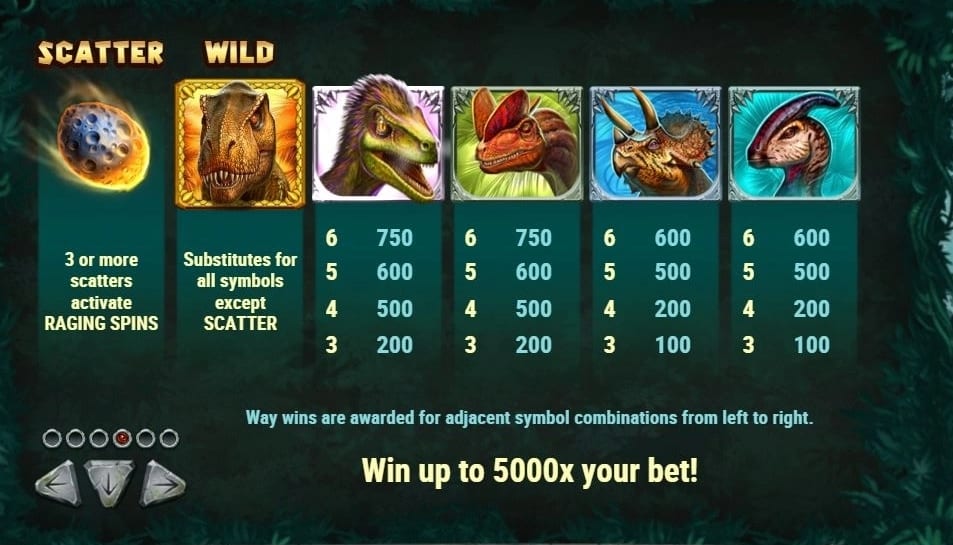 A player has up to 4096 ways to win in Raging Rex Slot on every spin.

One of the distinguishing features of games released by Play’N Go is the presence of game widgets. The game widgets are miniature versions of the game that can be integrated into the host website.

What is the Raging Rex Slot RTP?

This return to player rate predicts high wins for a player when they play the game. For example, for every one coin a player places as a bet, they may receive 94 cents in return.

What is the Raging Rex Slot Variance?

The Raging Rex Slot is a game with high variance. The high variance rate promises players that high paying wins are occasionally awarded throughout the game. Playing the game longer means having more chances to win high prizes.

Raging Rex Slot has unique features that are well-integrated with the graphic design of the game. The Wild Hunt and Primal Rage features during the free spin round are notable features. Including a progressive jackpot in the game can make the game more interesting to a wider audience in July 2021.

Raging Rex Slot is a fun and entertaining game.