Explore the majestic pyramids under the setting sun to find the golden scarabs of legend. Will you spot the scarab amongst the riches in September 2021?

Scarab Slots is a 5-reel, 75 payline, online video slot game, powered by IGT. This medium variance casino game has an RTP of 95% and an Ancient Egyptian theme. Bonus features, such as the Scarab Bonus, Pyramid Scatters and the Wild Pyramid Bonus, can help you win up to 200x your stake in real cash!

Find out how to bring home the big wins with the help of the wild pyramids, wild scarab symbols, scatter symbols, free spins, and more in this Scarab Slot Review.

From our research, we have created a list of the Scarab Slot in September 2021:

The Scarab Slot is an online slot that has an Egyptian theme. This slot game tells the important contributions of the insect that is most associated with Egyptian culture, the scarab. During ancient Egyptian times, scarabs were often used as seals for documents. The scarabs were also popular amulets.

This video slot game was designed by IGT to have five reels with each reel holding up to 4 symbol lines each. The Scarab Slot has 75 paylines for players who want to experience the game.

The Scarab Slot has a beautiful desert scene in the background. The sky in the scenery is transitioning from a warm, orange hue caused by the setting sun on the horizon to a deep and dreamy purple with floating clouds.

The towering pyramids reflect the warm, reddish-orange light from the sun. The sand dunes flow like waves at the feet of the pyramids. The sides of the reels are glittering from the heat of the sun and the sand, shining like a mirage.

How to Play Scarab Slot Online

Before you can play Scaraba Slot, there are several aspects of the game you can adjust to fit your preferences. Follow the basic steps described in this Scarab Slot Review to play the game easier.

In the Scarab Slot game, the different active symbols throughout the game have a mystic and colourful design with gold accents.

The low paying symbols in the Scarab Slot are the high symbols from traditional playing cards. This includes the 10, and J. It also includes the Q, K, and A. 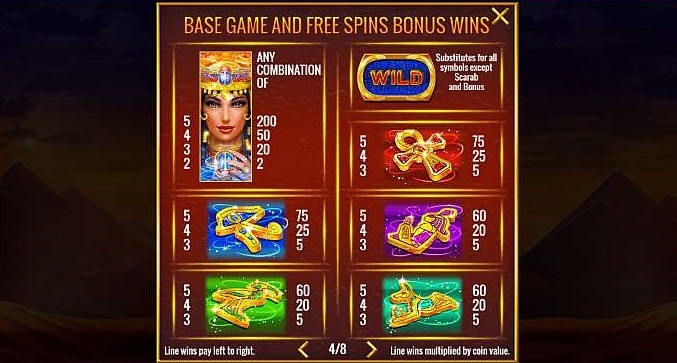 Here are the pays of the symbols in the Scarab Slot.

If the player manages to reach up to land enough scarab symbols for the counter to reach 10, all the symbols on the reels with the gold border will turn into a wild. These wild scarab symbols in the Scarab Slot can take the place of other symbols in the game. The only symbol the scarab wild cannot stand in for is the pyramid scatter symbol.

Scarab Slot players can play the game more conveniently. Use the Autoplay option to spin the reels for several rounds without interruption. 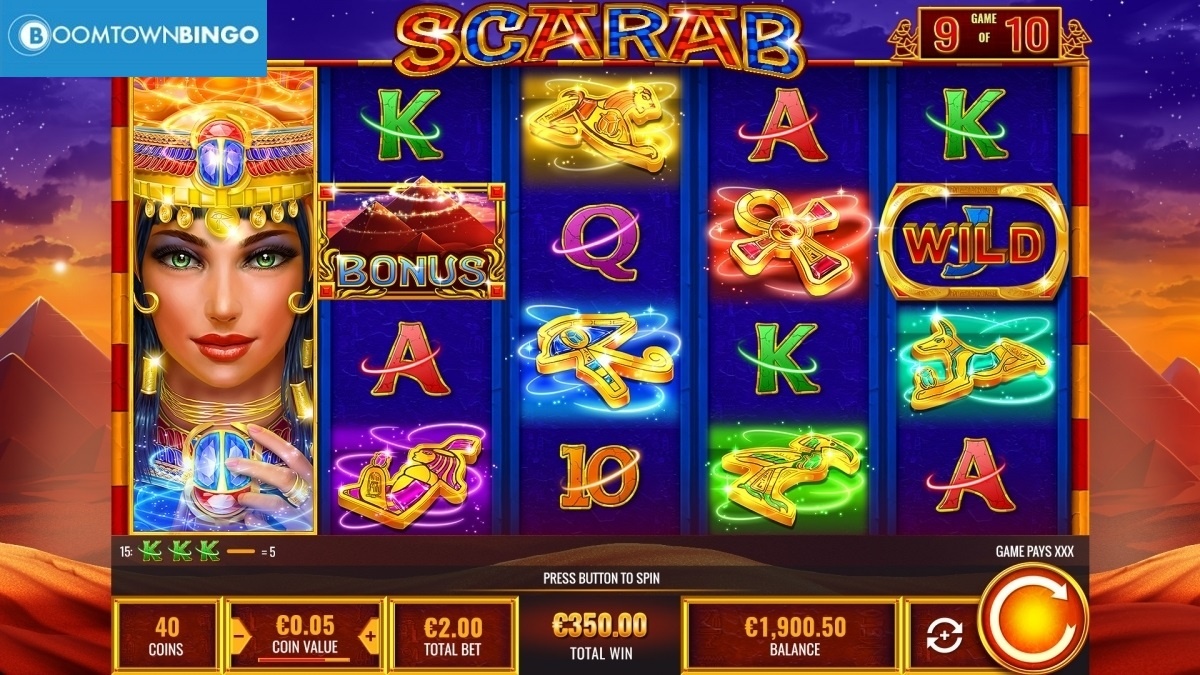 In the Scarab Slot, the scatter symbol is the Pyramid. Whenever the player manages to land 3 or more pyramid scatter symbols in a single spin anywhere on the reels gives the player free spins. This also awards the players wild symbols.

The Scarab Slot has 75 ways to win on every spin for its player. A winning combination is formed when the three or more matching symbols land across a payline in one spin.

A player has to place at least 0.75 as a bet to play the Scarab Slot. The most a player is allowed to place as a bet in the game is 2250.

IGT is a top slot game developer in the industry today. The company has designed and released many of the most popular games in the current slot game market. IGT has included social gaming into their games, helping players create a community and access their favourite online slots faster.

What is the Scarab Slot RTP?

What is the Scarab Slot Variance?

Scarab Slot has a medium variance.

The Scarab Slot is a beautifully designed game with all the basic features that most slot games have. The most notable features in the slot game are the Scarab feature, the wild pyramids, and the Scarab free spins. Updating the game to include a progressive jackpot may help increase interest in the game in September 2021.