Narcotics and kingpins are a dangerous mix. Will you stay a Cuban Refugee or will you rise to the ranks of Tony Montana?

Scarface Slots is a 5-reel, 20 payline, online video slot game, developed by NetEnt. This medium variance casino game has an RTP of 96.8% and a Gangster Movie theme. Bonus features, including Tony Montana Wilds, Scarface Scatters and Expanding Wilds, could help you win up to £10,000 in real money!

Find out in this Scarface Slot Review as you join Tony on his journey through the scandalous game of slots in January 2022. Spin to win and collect your money, one way or another.

From our research, we have created a list of the Best Scarface Slot Sites in January 2022:

Scandal is as abundant as the possible wins in this five-reel, 20 pay-line video slot game. Play amongst the blood, weapons, goons, and all the famous characters from Tony’s life. Play on and climb up, see if the scatter wilds, free spins, and bonus features can lead you to the 10,000 jackpot.

Say hello to Tony Montana and his little friend – the Scarface Slot game. Based on the iconic Al Pacino and Michelle Pfeiffer’s 1983 film, the Scarface game aims to show the more subdued side of the drug lord and mobster’s life.

In this highly realistic and graphic game, players can join the gang, and each player will be treated to snippets of the movie every time you meet a character. Designed to look just like the 1983 movie, the Scarface video slot game is the less violent or more subdued version of the mob boss’ life.

The game starts players off with the main characters filling the reels. Players will be able to experience the mob boss at work, with cash and guns littering the reels as you play. The sounds of guns firing can be heard as you spin, adding to the mob theme. Every aspect of this pays homage to the film, including things like a “Say hello to my little friend” shootout sequence straight from the movie.

This game keeps the spirit of the Scarface movie alive by showing short sequences from the movie every time a character symbol is introduced.

With a blend of cartoon graphics and real-live movie clips, this game is one for the books. Even if the background seems to be plain and dark, the action lies in the reels themselves.

The background music scarcely plays, giving players a foreboding feeling. Tony is enough to make anyone anxious – the sounds acting as additional scare tactics. This is the test you have to pass in order to rise to the ranks of Tony’s men. Catch Tony, Chi Chi, Elvira, and Manny as you spin the reels and collect your money. Stock up on your guns, cash, and chainsaws to make sure your cash keeps flowing.

How to Play Scarface Slot Online

Don’t join the mob just yet. Listed below are some tips and tricks you should consider:

This thrilling crime and mob-themed game is available online on any mobile, tablet, or PC device. 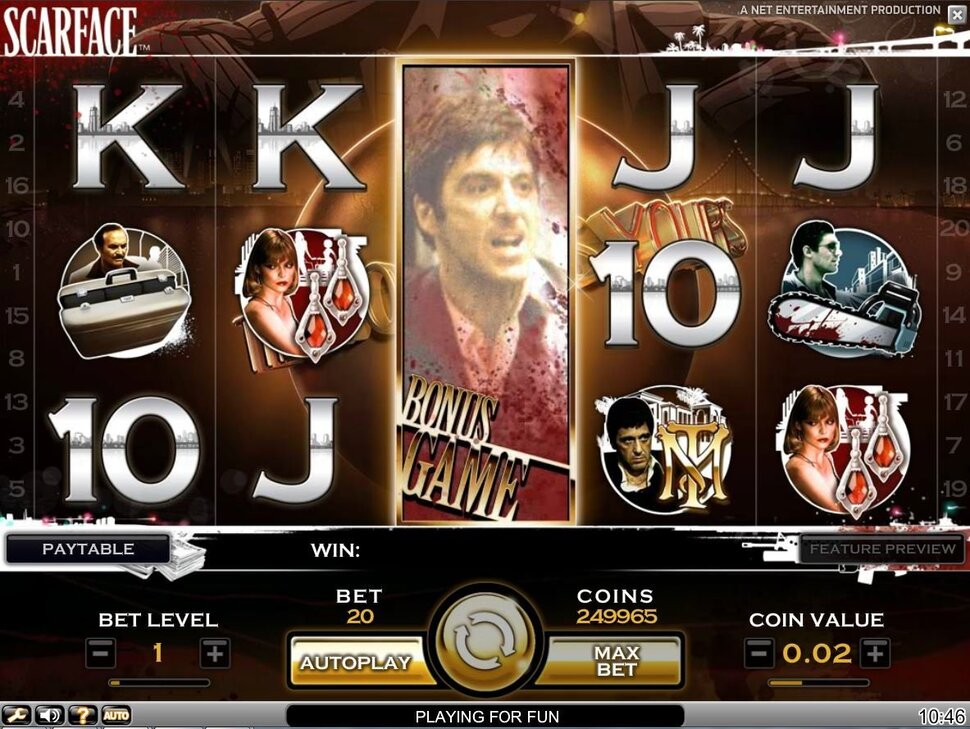 Triggering the Free Spins feature only takes three scatter symbols to be activated. Although, when it does get triggered, the scatter symbol turns into the symbol of Elvira Hancock. During this bonus round, the players will need to choose what symbol will be the “expanding” symbol for the round.

Where Scarface is involved, there’s bound to be a big bounty. And in this game, players can expect a jackpot prize of 10,000 smackaroonies, and for a measly sum of 0.1 to 0.5 coins per spin, players can have a chance to win this prize.

Though it might take a while to earn this kind of award, players can look forward to some character cameos, which act as the high-value symbols, and some low-value card symbols. These symbols can help generate some pretty heft wins by the end of the game, so keep your eyes peeled for them. 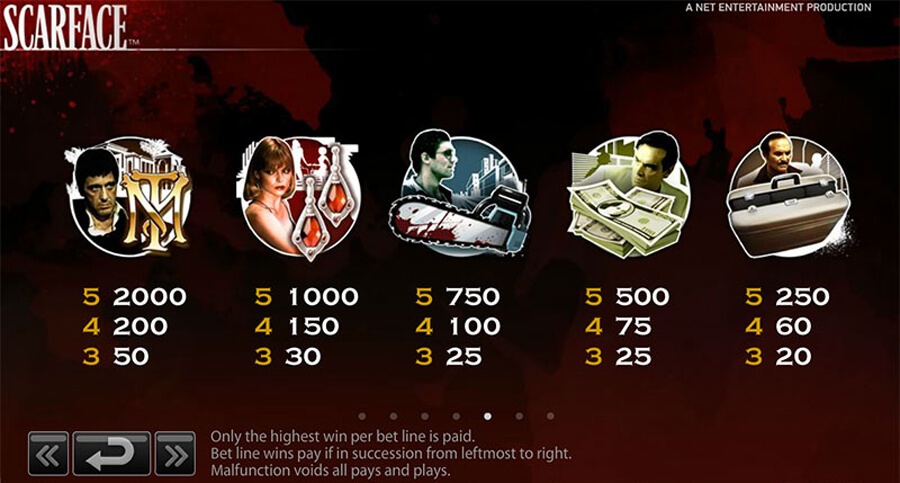 Characters such as Tony Montana, Elvira Hancock, Manny Ribera, Alejandro Sosa, and Frank Lopez grace the reels with their presence. And landing 3 to 5 of a kind of them can garner players amounts that range from 20 coins to 2,000 coins.

The Scarface game is another fun and thrilling video slot made possible by NetEnt Software.

NetEnt Software is one of the leading gaming providers known for giving players spectacular games available on all platforms. Their games are now also available for mobile play.

Al Pacino and Michelle Pfeiffer once again star together in this non-progressive video slot game of Scarface that has an RTP of 96.8%.

This Scarface Slot has a medium variance slot rating. That means the game provides players with good payouts, but these do land semi-frequently.

If you’re a fan of Al Pacino or even of the movie itself, then this slot will be a memorable and fun gaming experience for you. Although, if you’ve never watched this classic, find solace in the fact that you can get to know more about it through this game in January 2022. The characters make their debut into slot gaming and even present mini-videos whenever the game progresses. So players will be immersed and hooked in no time. There may be a limited set of bonus features, but all of these do prove useful enough to land some substantial amounts during the game.