Simsalabim Slots is a 5-reel, 25 payline, online video slot game, developed by NetEnt. This medium variance casino game has an RTP of 97.5% and a Magician theme. Bonus features, such as Magician Wilds, Magic Box Scatters and the Simsalabim Bonus Game, could help you win up to £75,000 in real money!

Watch objects disappear in front of your very eyes and learn how to make the impossible, possible in January 2022 with this Simsalabim Slot Review.

From our research, we have created a list of the Best Simsalabim Slot Sites in January 2022:

Trust a magician like Harry Houdini or David Copperfield to know how to make any illusion look believable. Hang with the likes of them, and you may just learn how to pull something out from nothing. Watch as their skills give a magical spin to slot gaming.

Bring on all the magic tricks up your sleeve. Is it a dove waiting to fly out? Or maybe a rabbit hiding in your hat? Anything is possible if you just believe. In this five-reel, 25 pay-line video slot game by NetEnt Software, magic once again puts wonder back into a classic game of slots. Let the winning combinations hypnotize and thrill you whenever they land, for here, players will get some dazzling wins and enchanting 3D graphics.

Featuring every prop a magician could ever need – the disappearing dove, the top hat and his wand, the rabbit, and even a deck of cards, players will be treated to some fun and mysterious tricks.

All the fun and mysterious hacks that magic can show will be revealed in NetEnt’s Simsalabim. The magician, who looks like he is channelling a more modern version of the great Harry Houdini himself, welcomes players into the art of making the impossible look possible.

These wonderfully illustrated cartoons bring the playfulness and wonder of the magic theme, enticing players to keep spinning. Now you see it, and then you don’t! Keep an eye out on your wins for things tend to vanish into thin air. So make sure you know all the trade secrets!

How to Play Simsalabim Slot Online

Learn how to hone your magic powers with these easy steps:

Generate winning combinations by first click the Bet Value, Lines, and Level buttons. These can be adjusted by toggling with the (+/-) sections on the panel. Once all the amounts, values, and lines are decided, players can begin spinning by clicking either the Autoplay button to generate several undisturbed spins, or the Spin button to generate one spin.

Simsalabim is now available for online play on any mobile (Apple and Android), tablet, or PC device.

Wilds. The magician represents the wild symbol. The wilds can substitute for other symbols except for the scatter and bonus symbols. 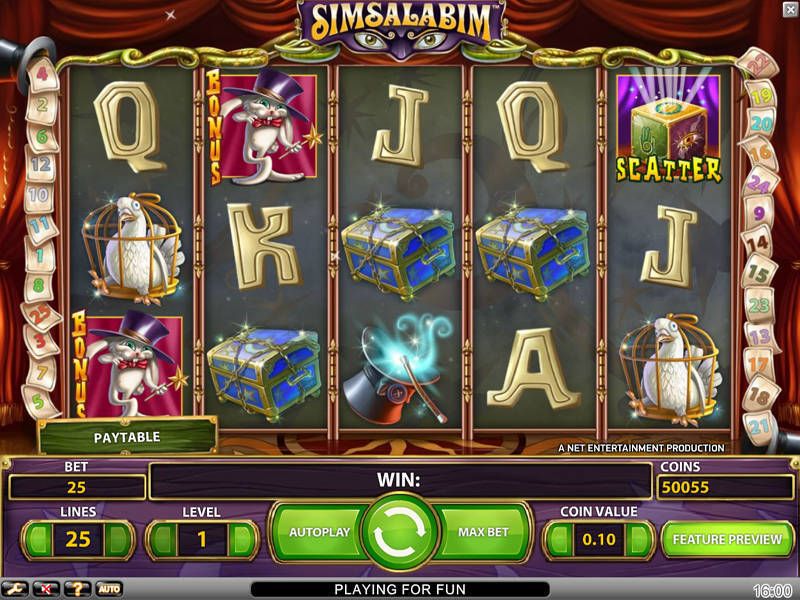 Magic can make anything happen, including triggering some free spins to help move those wins along. This feature activates by landing at least 3 of the magic box scatter symbols on the reels.

Before anything can happen, players must first offer up anything from 1 to 10 coins per spin to let the magic begin. But once the reels spin, magic will only take players as far as the spins can go. Players must keep in mind that to get the 7,500 jackpot prize, the help of wilds, high, and low paying symbols will be necessary.

The wilds can trigger anything from 5 to 7,500 coins if 2 or 5 of a kind land on the reels, respectively. 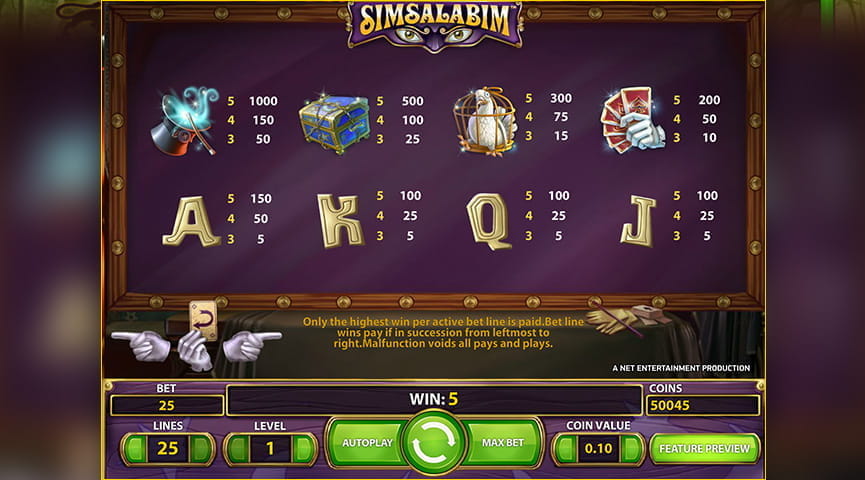 Though do not fret if this symbol does not easily appear. It takes skill and practice to call forth powerful wilds to the reels. This is where high, and low-paying symbols become useful. The magic hat, locked box, caged bird, and playing cards act as the higher paying symbols. The hat represents the highest symbol. Now, this symbol pays players as much as 1,000 coins if 5 of it land on the reels. It also pays players as little as 50.

The other symbols can reward players amounts varying from 10 to 500. These are fundamental to earning higher wins so practice until you can summon as many of these.

Other symbols include A, K, Q, and J. These pay far less but can still help players elevate wins by fetching amounts between 5 to 150 when 3 or 5 like symbols respectively land on the reels.

The Simsalabim slot was possible by NetEnt Software.

NetEnt Software is one of the world’s leading gaming providers. They are dominating the market with their unique and premium online games that provide digital entertainment on all platforms, including mobile platforms.

What is Simsalabim Slots RTP?

This wonderous video slot game has an RTP of 97.5%.

Simbasalim has a medium variance, which means players have a chance of landing good, frequent payouts.

Magical and riveting, this game will have players spinning for hours on end. The volatility is within an excellent range to provide good wins and opportunities to players. This Simbasalim slot game is suitable for any level of player as the wins come frequently and the payout is generous enough to earn some decent wins in January 2022.