Save Rachel while battling your arch-nemesis, Joker and Two-Face. Work hand in hand with James Gordon to help Batman defeat his foes and save Gotham.

Will you be worthy to light up the Bat-signal to call Batman in September 2021?

Learn how to work with Batman while bringing home big wins and defeating evil in this The Dark Knight Slot Review.

From our research, we have created a list of the The Dark Knight Slots sites in September 2021:

About The Dark Knight Slots

The Dark Knight Slot is an online slot game developed and released by IGT. The slot game draws inspiration from the famous movie trilogy with the same title. Each part of the trilogy is represented by a unique set of reels included in the game.

Various elements of the game carry out the theme of the slot. The background of the Dark Knight Slot game is the setting of all the movies, the dark and ominous Gotham City. Throughout the slot game, a gloomy and menacing soundtrack plays in the background. Accompanying sound effects play while the reels spin to further complete the slot gaming experience.

The Dark Knight Slot is a video slot game that has progressive jackpots.

How to Play The Dark Knight Slots Online

For a patron to play Dark Knight Slot within their preference, they can adjust several factors of the game. This includes the total bet placed in the game for the round. Follow these steps in the Dark Knight Slot review to play the game more efficiently using the controls found on the game panel.

The Dark Knight Slot can be played on devices with relatively bigger screens such as desktop computers and laptops. It still is to be updated to be accessible on mobile devices such as smartphones and tablets.

The Dark Knights Slto game has special features and bonus attributes that players may encounter throughout the game. These bonus features help the players win more jackpots and bigger wins.

The active symbols in the Dark Knight Slot are the characters in the 2008 movie.

Here are the pays of the symbols in the Dark Knight Slot.

The wild symbol in the Dark Knight Slot is the Batman logo with the word Wild. 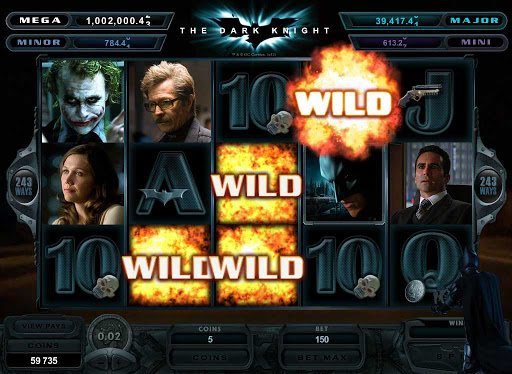 This Batman wild symbol can take the place of other symbols in the game to complete more winning combinations. It only appears on reel 2, reel 3, reel, 4, and reel 5.

The only symbols the Batman Wild cannot stand in for are the Batman Bonus and the Joker Bonus symbols.

The progressive jackpot is timed, with the game automatically selecting a tile for the player if they failed to choose a tile within the time limit.

The players of the Dark Knight Slot can play the game conveniently using the Autoplay option. This option lets the players spin the reels automatically without any interruption for several rounds.

The Dark Knight helps the player win more from the game by awarding reel respins. These respins are determined by special stacked symbols and a coin toss.

When both the first reel and the sixth reel are covered by stacked symbols, the coin toss determines which repsins feature is awarded.

When the first reel is covered by the stacked Batman symbol, all the Batman and Wild symbols lock on the reels and the Batman coin tosses.

When the sixth reel is covered by the stacked Joker symbol, all the Joker and Wild symbols lock on the reels and the Batman coin tosses.

The Dark Knight Slot gives its players a free spin round to help them win more jackpots and bigger wins without spending extra money. These are the Dark Knight Free Games, the Agent of Chaos Free Games, and the Gotham City Free Games.

The Dark Knight Free Games is triggered when the Batman Bonus scatter symbol lands on the second and the third reels in one spin. The player receives 7 Dark Knight free spins.

The Agent of Chaos Free Spins

The Agent of Chaos Free Spins activates when the green Joker Bonus scatter symbol lands on the fourth reel and the fifth reel in one spin. The player receives 7 Agent of Chaos free spins.

During this feature, all the Batman symbol are wild and can lock on the reels.

In the Dark Knight Slot, the players have up to 50 ways to win whenever they play the game.

All the paylines in the slot game only pay one way, awarding-winning combinations formed from the left to right.

The lowest bet in the game is 0.20 while the highest bet allowed for one round is 15. 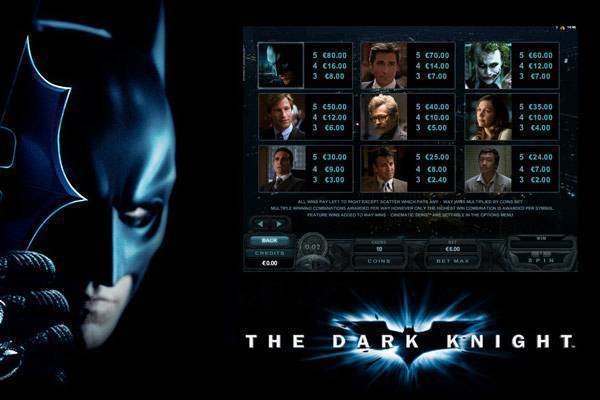 The Batman symbol is the highest paid symbol in this slot game.

The Dark Knight Slot was released and developed by IGT.

IGT is one of the top slot game software providers in the current market. The company has secured the rights to create slot games for the Dark Knight slots. IGT encourages responsible gaming with all of its players.

What is The Dark Knight Slot’s RTP?

This rate is the current average in the slot gaming market. It helps players predict how much they can expect to win from the game. A 95% return rate is roughly equivalent to a return of at least 95 cents for every pound placed as a bet.

What is the Dark Knights Slot Volatility?

The Dark Knight slot’s variance is yet to be known as well.

The Dark Knight Slot is a creative and engaging slot game. The gameplay is easy to learn for both new and old slot players. The Dark Knight Slot has most of the basic features of a slot game like the wild symbols and the scatter symbols. The features that enhance the gaming experience are the Batman Respins, the Joker Respins, and the various bonus free spins games.

The progressive jackpot is also a great factor that helps in making the game more popular in September 2021. The Dark Knight Slot is a slot game worth the try.