The Keystone Kops Slots is a 5-reel, 30 payline, online video slot game, powered by IGT. This medium variance casino game has an RTP of 95.25% and a Comedy Movie theme. Bonus features, alike to Rainbow Wilds, the Second Chance Bonus and Mystery Multipliers, could help you win up to 2,000,000 coins!

This technicolour slot is very impressive with its high-end computer graphics, unlike the bumbling and inept officers of Mack Sennett’s various silent film comedies.

In this The Keystone Kops Slot Review for January 2022, you will learn more about the features listed above, as well as the three live games that feature the exploits and antics of the classic TV series’ humorous cops.

From our research, we have created a list of the Best The Keystone Kops Slot Sites in January 2022:

About The Keystone Kops Game

It has a slapstick feel to it and follows the bumbling exploits of animated cops who can’t seem to stay out of trouble when solving their cases.

The four Keystone Cops, as well as police uniforms such as police caps, handcuffs, batons, whistles, and retro telephones appear as symbols on the reels.

Overall, the graphics of The Keystone Kops appeal to gamblers in a lighthearted manner.

How to Play The Keystone Kops Slots Online

As previously said, there are three different games in this slot machine: Pilfering Pooch, Pie Patrol, and Shuffle Scuffle.

Although they all have a similar appearance, each has its own set of gameplay features.

However, the following are the basic steps to playing these games:

These games can be played at land-based casinos, on desktop computers, and on handheld devices like smartphones and tablets.

You can enjoy a mobile experience on Android smartphones, iPhones, iPads, or tablets.

Each game in The Keystone Kops game has its bonus features. 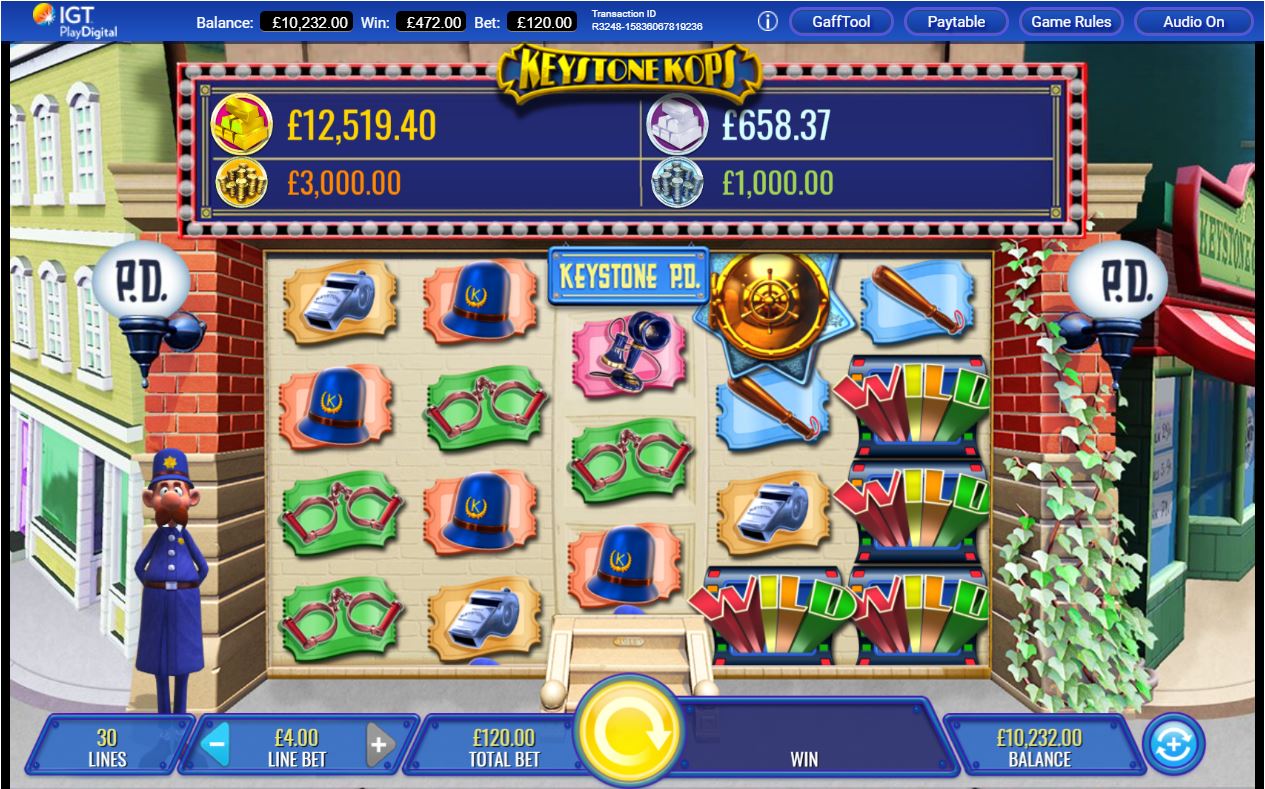 This game has five reels and 60 paylines.

Each cop has a different-coloured background.

The following are the game’s bonus features:

It can substitute any of the basic icons in the game.

The substitution happens when you hit the rainbow wild symbol anywhere on the reels.

Afterwhich, one of the Keystone Kops will turn the other characters on the screen into Wilds.

Any spin can trigger this feature.

Once activated, you have to select vaults to reveal bronze, silver, and gold symbols.

To win the prize, you have to match three in a row.

In this game, you need to land pie maker symbols on the third reel.

The entire reel then transforms into a wild.

The high-value symbols like the Kops and the wilds are the key to activating the Shuffle Scuffle game.

When you land high-paying symbols of the same kind on all three positions of the third reel, the game transforms random characters into the one that activated the game.

With this feature, all the icons will shuffle up to five times to different positions on the reels and be mixed up, and you can create higher payouts.

There are also other features that you can trigger during the base game.

This feature activates when the bonus symbol lands on reels 2 and 3.

One of the symbols on reel four then transforms into one of the bonus symbols that triggered the feature.

A win on the second and third reels will activate this feature.

It will then shuffle the symbols on reels 4 and 5 to increase your chances of landing winning combinations.

Any win can trigger this feature randomly.

One of the symbols included in the winning combination that activated the feature will be upgraded to a higher-paying symbol.

If the symbol is the highest-paying among the standard symbols, it will be upgraded to a wild.

This feature applies a random multiplier to the Shuffle Scuffle, Shuffle Up, or Symbol Upgrade features.

The multiplier value can be anything between 2x and 10x.

The Keystone Kops game has a Pie Patrol Free Spins Bonus feature where you will get eight free spins from the off.

The free spins round is playable on 100 paylines.

The Keystone Kops slot is powered by IGT.

It is a multinational gaming company that allows players to access games across all channels by producing desktop and mobile-optimized slot machines.

What is The Keystone Kops Slots RTP?

Since the standard RTP for online casinos slots is 95%, the range of Keystone Kops slot’s return-to-player rate is considered to be above-average.

The Keystone Kops game has a medium variance.

This level of slot volatility corresponds to moderate chances of winning and steady payouts throughout the game.

Where can I play The Keystone Kops slots for real money?

You can play The Keystone Kops online slots for real money when you play through IGT casino games.

When you play on this slot for real money and amazing cash bonuses… why wouldn’t you want to play?

Just place your bet and spin… the real money can be yours in an instant!

Can I play The Keystone Kops game for free?

You will be able to play this amazing game for free when you play through the demo game mode.

When you play in the demo mode, you will be able to enjoy interactive features, such as a no deposit bonus, free slots, bonus rounds, bonus game, free games, and so much more!

Unfortunately, you will not be able to play for real money as this will require a deposit.

To conclude this The Keystone Kops Slots Review for January 2022, this slot is definitely designed for casual and fun-loving players.

There are a lot of rules to keep in mind, but you can just consult our review or the game instructions included in the slot’s game settings menu to keep up with everything.

Try out the Keystone Kops now by visiting any of our recommended slot sites!