Would you like to see some wacky dwarves who do mining for a living?

Then go ahead with a bang and hammer this Boom Brothers Slot Review!

Boom Brothers Slots is an online slot game running on the NetEnt software. Boom Brothers slot has 5 reels, 20 paylines and is designed with a dwarf mining theme, with it’s very own bomb wild symbols! Players can also use the free spins on Boom Brothers slots, as well as many other bonus features.

From our research, we have created a list of the Best Boom Brothers Slot Sites in August 2021:

Boom Brothers is a video slot game from NetEnt with a theme inspired by mining and explosives. It comes with 5 reels, 3 rows, and 20 paylines.

The Boom Brothers slot opens with an obviously ecstatic red-headed dwarf who decides to use explosives during mining apparently as a way to make his job more manageable. This dwarf is only one among a group of wacky dwarf brothers.

Players then get taken to the playing screen where the fun begins. 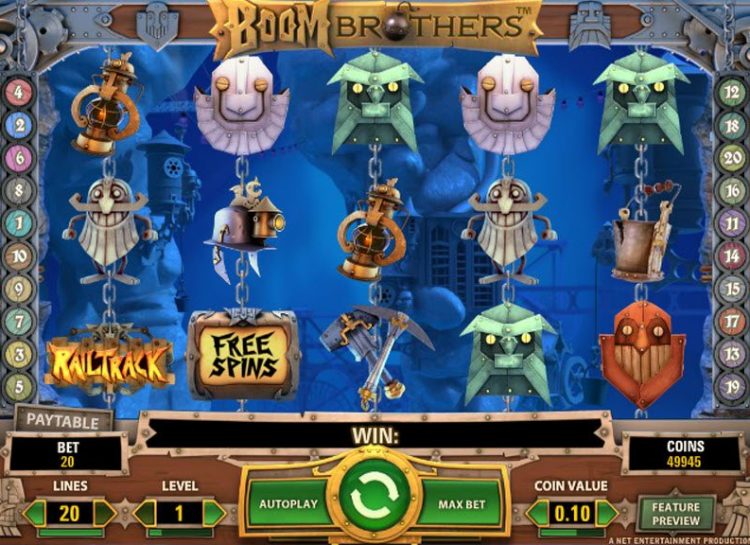 When it comes to graphics design, the cartoonish mining-inspired theme of Boom Brothers is evident that soon as players begin playing the game. The colour scheme is dazzling and vibrant and is consistent with the funky vibe the game aims to portray.

After the introductory film, the game screen emerges with turning gears and symbols set on rolling down chains.

The symbols consist of things players can expect from a mining-themed video slot game. These include mining-related items with low values and characters with high values.

The former includes a miner’s helmet, a cracked bucket, a pickaxe and hammer, and a glowing lantern.

The background audio is also impressive and unique, given that it further enhances the overall underground feel of the game.

Players may set the maximum bet available by clicking on the “Max Bet” button. This option spins the reels automatically.

Boom Brothers is fully-optimized for mobile play and available on devices such as iPhones, iPads, Android and tablets. People who prefer playing on the go would love this.

During the second stage, the dwarf brothers are on three different tracks. Players then need to click on one of the three carts containing either a ruby, a diamond, a gold bar or a number of places the players can move. 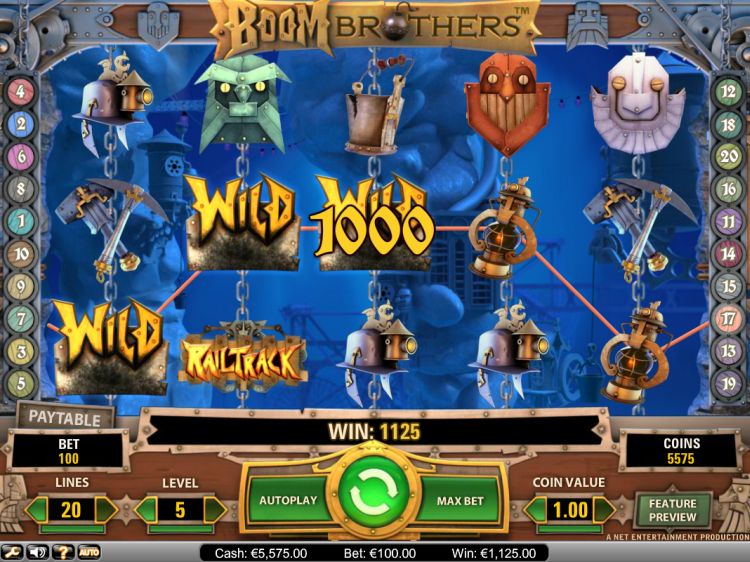 To make the dwarf move across the screen to grab the players’ prize, they need to be able to get a metal picture first.

The Free Spins feature is another special feature of the game which increases players’ chances of having a big win.

Getting three or more of the Free Spins symbols anywhere on the reels generates a random number from 8 to 50, showing the number of spins a player receives.

All wins scooped during this feature get subjected to a 3x multiplier. Also, a wager-free spin is earned every time a Free Spin icon appears.

Boom Brothers is played on 20 paylines running from left to right.

The littlest coin size is 0.01, while the maximum is 1. The number of coins per row runs from 1 to 5. Meanwhile, the highest award a player can get is a whopping 7,500 coins.

NetEnt has been a true pioneer in driving the market for 20 years. With thrilling games powered by their cutting-edge platform, the people behind NetEnt take pride in delivering flexible digital casino solutions to their customers. This makes them unique, premium, informed and ahead, all at the same time.

What is the Boom Brothers Slot’s RTP?

The Return to Player for Boom Brothers is 96.4%.

You get lots of chances to win on this game, and you’re able to enjoy plenty of wins per spin.

Given everything that has been mentioned in this slot review, from the game features to the slot volatility, Boom Brothers slot is very much highly recommended despite not having a progressive jackpot because of its sufficient number of special features!

So show some love and come play Boom Brothers slots in August 2021 for the chance to win huge amounts of money!