Hop onto the spaceship and head out to outer space where you can find wins and prizes of celestial proportions. Travel between planets, asteroids, and meteorites in search of heavenly treasures.

Cosmic Eclipse Slots is a 5-reel video slot game with 10 paylines, 3 rows, and an outer space theme. This medium-variance NetEnt casino game has a 96.52% RTP with bonus features such as the Black Hole Bonus, the Black Hole Bonus Scatter, and the Asteroid Wild, giving slots players a sci-fi vibe.

Are you daring enough to test your luck at conquering the cosmic jackpot?

Learn about the slot game in this Cosmic Eclipse Slot Review to explore the remarkable outer space with wilds and a bonus round.

From our research, we have created a list of the Best Cosmic Eclipse Slot Sites in July 2021:

Cosmic Eclipse is a game with five reels and three rows. It has ten fixed paylines. This online casino slot game was released on the 12th of December 2017.

The game is set in outer space. It features bright coloured celestial bodies, starry galaxies, and natural occurrences in the universe.

Cosmic Eclipse is a video-based slot game with the universe as its theme.

The whole game is set next to the background of outer space with twinkling stars scattered around the screen. A black hole, highlighted with a deep purple colour, is placed to the right of the reels.

The control panel of the game can be found at the bottom of the screen. The panel displays the current bet at stake and the betting level.

It also shows the coin value and the buttons used to adjust the amount besides which is the total coins earned. The Autoplay, Max Bet, and Spin buttons are located in the middle of the control panel.

The reels of Cosmic Eclipse have an opaque, black background. The symbols on the reels are all celestial bodies.

A mystifying soundtrack plays while the reels are turning. When a player hits a big jackpot, an intermission show falling meteorites and a triumphant tune play to celebrate the big win.

How to Play Cosmic Eclipse Slot

To start playing Cosmic Eclipse, the first thing to do is to set the coin size.

Carry the whole universe in your hands wherever you go. Cosmic Eclipse is available even on mobile devices on instant play mode and download mode. It can be supported by both android phones and Apple devices without compromising the gameplay and the graphics.

To win at Cosmic Eclipse, a player has to land winning combinations across the paylines. Different symbols in the game have varied pays. 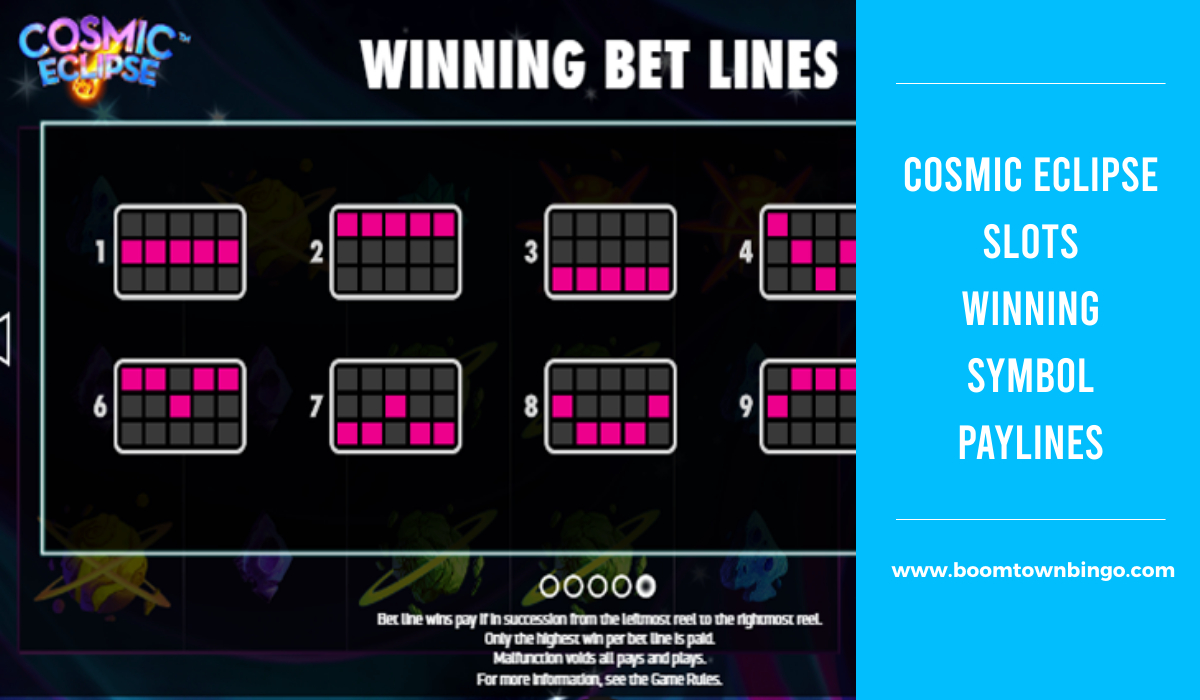 Here are the symbols arranged from the lowest paying symbol to the highest paying icons. The equivalent values for each of the symbols are set from landing a three-of-a-kind and a four-of-a-kind combination, respectively. The last value is the reward for landing the same symbol in all five reels.

Playing at Level 10 with the maximum coin size awards a player with bigger wins. The top wins at the highest stake for Cosmic Eclipse is up to 400x a players bet.

Cosmic Eclipse has a wild symbol in the game. This symbol is a collection of stone fragments with the word Wild. This wild symbol can substitute for almost all the other symbols in the game to complete a winning combination, except for the bonus symbol. 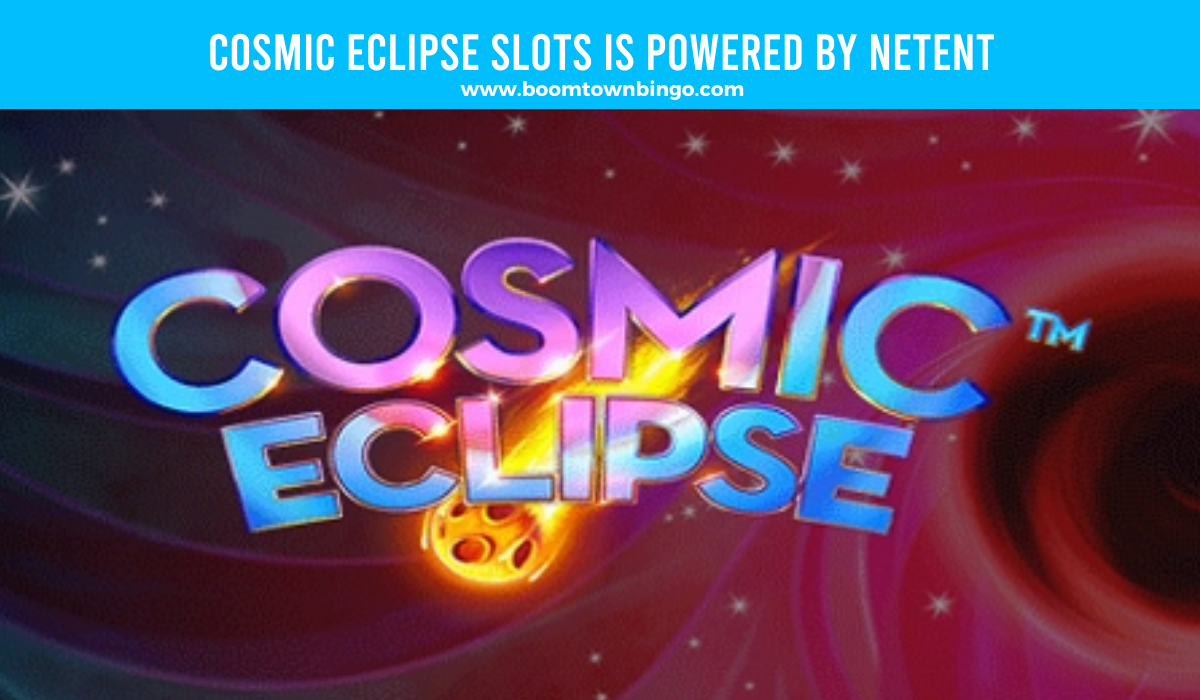 It was developed in partnership with Betsson Group, another big shot in the slot gaming industry.

NetEnt has a wide variety of popular slot games that have branded titles. They also have many developments that are based on blockbuster movies.

All the remaining symbols on the reels are cleared away. The collected active and wild symbols are then randomly returned to the reels to guarantee the player at least one winning spin.

What is the Cosmic Eclipse Slot RTP?

Cosmic Eclipse Slot has an RTP rate of a little over 96%. This RTP is the average in most slot games that promises decent returns to the player. 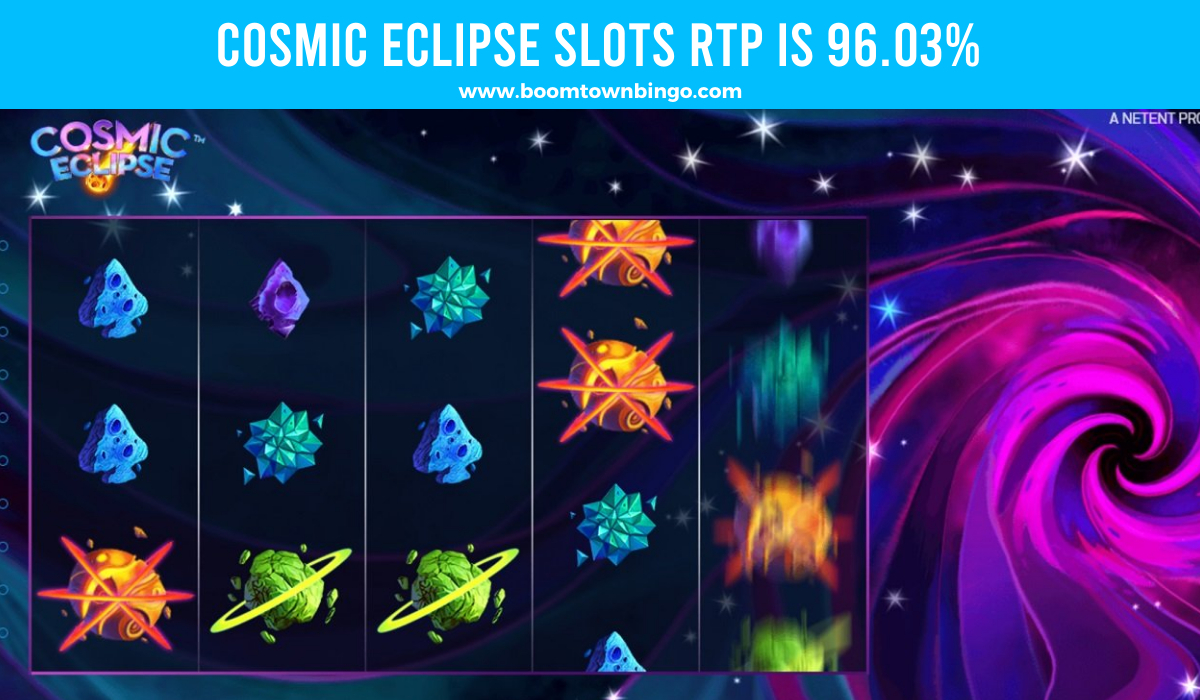 What is the Cosmic Eclipse Slot Variance?

Cosmic Eclipse is a low to medium variance game. This variance assures a player average to big wins as they play the game longer.

The Black Hole feature of the game is the most exciting part of the game, but it is not triggered often. This feature also does not assure bigger wins for a player. Including a jackpot progressive can increase the game’s popularity.

The plainness of the gameplay and good graphics quality make Cosmic Eclipse a perfect game for a player who seeks simple plays.