Save the world from a dystopian future and win real money in the process.

Arcane Reel Chaos is a NetEnt-powered slot game with 5 reels, 20 fixed paylines and loads of bonus features to enjoy. Its Dystopian future theme sets the scene, and encourages players to make the most of features such as multipliers, free spins and much more.

Get hold of big wins as you defeat the villain- Deep Pocket. You’ll also be able to enjoy overlay wilds, stacked wilds and free spins that are activated by the scatter symbols.

Read our full Arcane Reel Chaos Slot Review in October 2021 to find out more on Deep Pockets Bonus, the RTP and the software used.

From our research, we have created a list of the Best Arcane Reel Chaos Slot Sites in October 2021:

Arcane Reel Chaos is an attention-grabbing casino slot game with a theme inspired by the villains and spooky characters.

When it comes to graphics design, the dystopian future world theme of Arcane Reel Chaos is obvious once players start playing the game. The colour scheme is dark and is consistent with the ruined futuristic city it aims to portray.

The symbols consist of everything players can expect from a gothic-themed video slot game. These include 10, J, Q, K, and A drawn with gold old-script letterings. These are also set on what seems like playing cards.

The characters are great too with their well-produced graphics. Players would want to see the magicians Flare, Chronos, Zero X, and Psyop rather than the evil villain Deep Pockets. Each of these good forces can activate their unique features.

The orchestral soundtrack in the background is also amazing, given that it enhances the overall gothic feel of the game.

The elegantly drawn graphics along with the matching music have an inspiring and encouraging feel, adding to the central theme of the video slot.

To play Arcane Reel Chaos online, you must:

Arcane Reel Chaos is fully optimized for mobile play. It is available on all mobile devices such as iPhones, iPads, Android phones, and tablets. This is a piece of great news for players who prefer playing on the go! 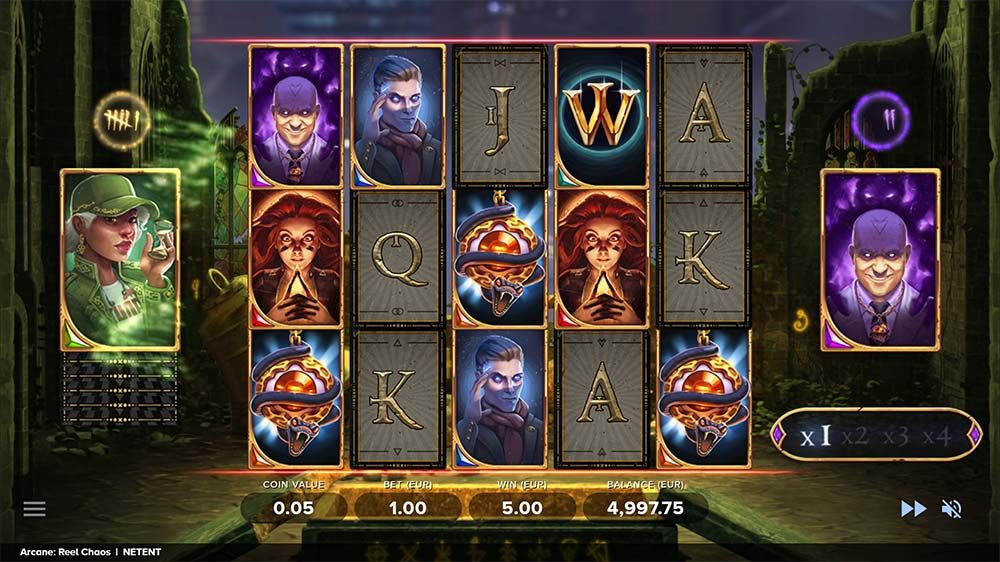 Flare gives a Multiplier feature which raises the multiplier by a value from 3x to 5x.

Zero X has an Overlay Wilds feature wherein three to five Wilds are added at random.

Finally, Chronos gives a Respin feature wherein the player receives respins until a winning combination is formed after a non-winning spin. With each respin, the multiplier value increases by up to 10x.

The Free Spins Bonus can be activated using the golden locket icon. This is a special feature wherein the hero characters fight with Deep Pockets in four different stages. During which, the health points of the villain are directly related to the size of the multiplier.

For example, during the first stage, a 1x multiplier is active while Deep Pockets has two health points. This means that the hero can easily defeat him, but the player’s wins are only boosted by 1x.

During the fourth stage, a 4x multiplier is active while Deep Pockets has six health points.

Arcane Reel Chaos is played on 20 paylines running from left to right. 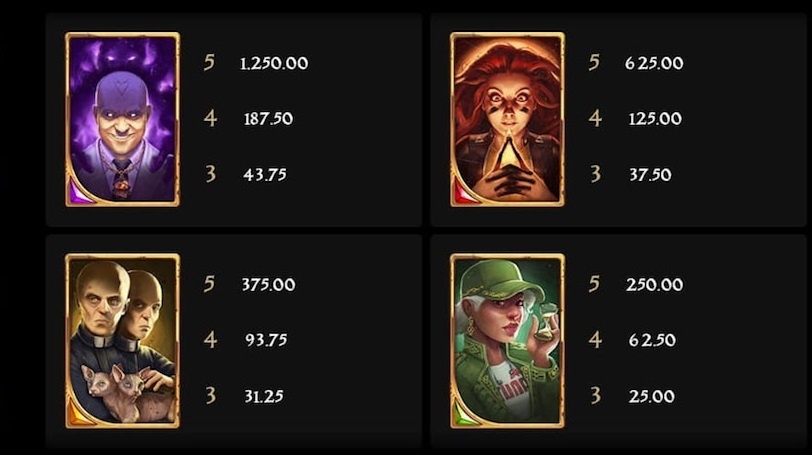 Although he is the evil villain in the game, Deep Pockets surprisingly gives the most rewarding symbol. When five Deep Pockets symbols land on a single payline, the stake gets subjected to a 50x multiplier.

Arcane Reel Chaos was developed and released in 2019 by the popular and highly-esteemed online gambling software provider, Net Entertainment.

NetEnt has been delivering a wide selection of casino games since 1996. They are a reliable technology that ensure a smooth experience throughout.

What is the Arcane Reel Chaos Slot’s RTP?

This means that there could be a 96.81-coin return from the theoretical 100.00-wager. Given its high RTP rate along with the incredible features mentioned above, expect this game to provide an excellent chance of scooping a big win.

Medium variance slots such as this one offer the chance to win regularly whilst also providing plenty of big win opportunities.