Are you not entertained!?

You will be, because this slot game is full of twists and turns. If you enjoy exciting graphics and plentiful bonus features, then this game is for you.

Rome: Rise of an Empire Slots is a 5-reel, 20 payline, online video slot game, developed by Blueprint Gaming. The medium variance casino game has an RTP of 96.64% and a Roman Empire theme. Bonus features, including Sword Strikes and Coliseum Scatters, could help you win up to 10,000x your stake!

You’ll join the warriors and gladiators, as you entertain the thousands in attendance. You could reap some lofty rewards in the process.

This three-reel video slot has 20 pay-lines and a max win of 10,000x your stake! Rise of an Empire slots also boast free spins, wilds and other bonuses.

In this review, we take a look at all the features, wins, RTP, software and the mobile version.

From our research, we have created a list of the Best Rome: Rise of an Empire Slot Sites:

This encapsulating theme is one that has attracted plenty of rave reviews. It’s not just customers enjoying this slot game. Many of the slot sites are also reaching for this game and hosting it on their platform.

You can easily access this game; it is now available at a number of online casinos.

If you’re unsure on where to join, save yourself time and use the websites we have listed here. We have lots of experience and have managed to provide all of the sites you need, simply click the link, register and play Rise of an Empire online.

We urge you to check out the latest promotions before committing to a casino.

How to Play Rome: Rise of an Empire

You can play Rome: Rise of an Empire by setting the stake and spinning the reels.

Here’s how to play Rise of an Empire:

You will want to match symbols on winning lines. This slot game is a conventional one for the most part, but it does offer you the chance to access interesting bonus features.

There are so many interactive features at Rome: Rise of an Empire, it is hard to keep down. Luckily for you, we have listed some of the most exciting features available on the site.

The base game can pop up with a random bonus at any time. This adds to the anticipation, offering lots of different feature rounds. 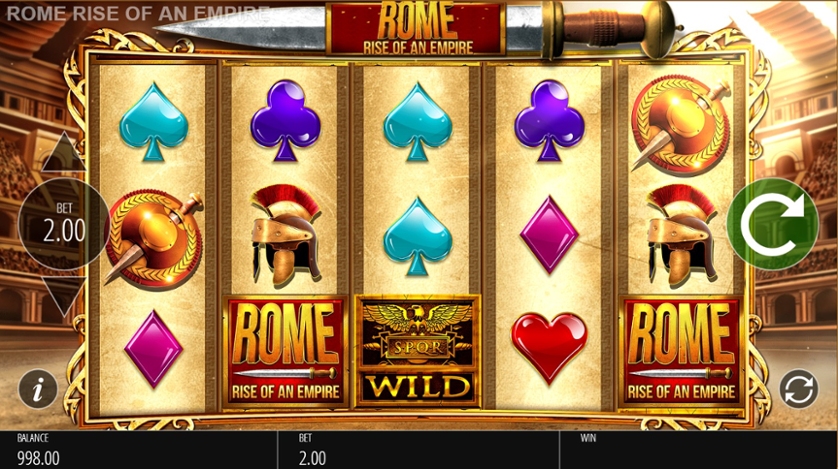 If the tiger pops onto the reels, you are in luck. You could play any of the following bonuses:

You can also land the scatters and activate the main bonus feature. You will need to get three or more scatter symbols to trigger this bonus. 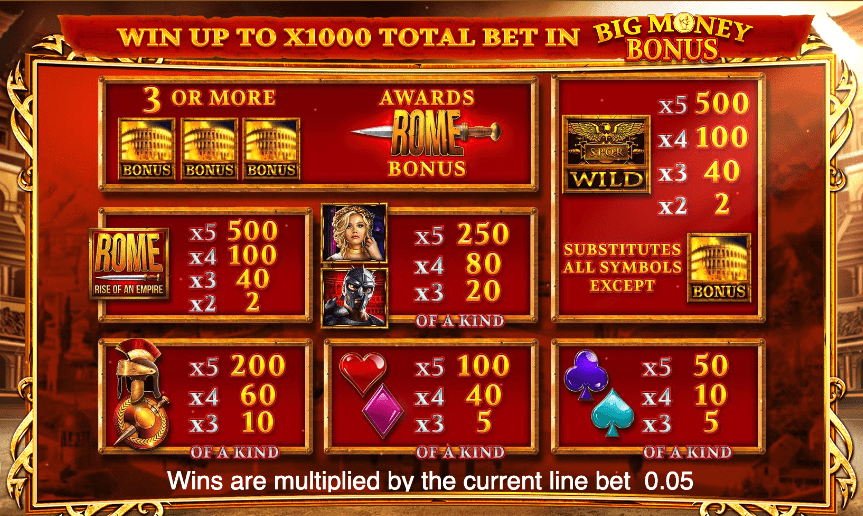 Rome: Rise of an Empire Logo is the highest paid symbol, with a potential payout of 500 coins.

Rise of an Empire is a mobile slot game that can be played from iOS and Android.

This makes it easy for you to play your favourite game. You won’t need to download or install an app- simply find this game and enjoy it from your phone or tablet. It has built-in HTML-5, which offers a mobile and desktop version.

Play from your phone, tablet or computer.

Rise of an Empire Graphic Design

Aside from the multitude of bonus features, one of the most appealing elements of this game has to be the graphics.

They have depicted this theme in style, you can become a Gladiator as you play for the bonus. It has an array of colourful symbols, a backdrop and lots of features.

About Rise of an Empire

It’s all about gladiators and warriors. Aim to conquer with this exciting game, it comes with ancient settings and lots of bonus features.

It is possible to activate the bonus feature with scatter symbols or trigger randomised features.

This game comes with lots of chances to win big and other functions to keep you engaged.

What Software is Rise of an Empire?

The software for Rise of an Empire is Blueprint Gaming.

They are the software creators for numerous games. With 100’s of games in their line-up, you can be sure that you’re in safe hands.

We trialled the software regardless and we were pleased with the results. It is fast and the gameplay is smooth.

What RTP is Rome: Rise of an Empire?

The return to player percentage is above the average that we expect.

The industry standard is 95% and anything that is able to match that, gets our vote. We’re happy to see that they have gone above and beyond with their Return to Player percentage. This means there is a very good chance of a pay-out on each spin.

Rome: Rise of an Empire has a medium volatility.

Using a site with medium variance is a great way forward, as you get the best of both worlds. You can have a good chance of winning with reasonable jackpots too.

Now you have read our review, check out more from Blueprint Gaming below to see other offers in October 2022.

This is a shortlist of the most popular games available from Blueprint Gaming and does not mean the best in the online gamers reviews.

Overall, we are impressed with Rome: Rise of an Empire. With plenty of features and a good RTP and variance, you can hardly go wrong.

Why not look out for a site with this game on today?