Will your wish come true as you play for real money prizes on this Golden Genie & Walking Wild Slot? The exciting slot game is based on the retold story from Aladdin. It’s all about the genie, rub the lamp and wait for the genie to deliver.

Golden Genie and the Walking Wilds Slots is a 5-reel video slot game with 20 paylines and an Arabian Night theme. Powered by NoLimit City, this medium variance casino game has an RTP of 96.36%. The bonus features include Genie Wild & Scatter, Lamp & Wish Bonus, Parade Walking Wilds, & Buy the Bonus.

Find out how our trial of this game went in the full Golden Genie & Walking Wilds Slot Review below. We talk about the software, RTP and the many bonus features, including that of a buy the feature option.

From our research, we have created a list of the Best Golden Genie & Walking Wilds Slot Sites in January 2022:

Golden Genie & Walking Wilds is a video slot based on the famous genie story. This tale is mostly recognised from the famous Aladdin movie but it’s been told and used in a number of ways. The latest being this action-packed slot game that comes with some fascinating characters and even more appealing bonus features.

The game comes from NoLimit City Software and they’ve done an amazing job with the graphics. They’re not the most crisp but they stand out and also add to the story.

Furthermore, it comes with sound effects and music that add to the anticipation.

Playing a slot machine of this nature is easy, you adjust the betting lines and wager. From there, it’s a case of spinning the reels and hoping for a winning combination.

Sounds easy, doesn’t it? That’s because it is!

For details on how to land winning combinations and how much they pay, use the paytable on the menu. It will break down how much each symbol is worth and how to trigger the bonus features.

You’ll be thrilled to learn that you can play this game on the move, thanks to its mobile compatibility. No need to download mobile phone apps, instead access the site and game from your phone. The HTML-5 built into the game ensures that it automatically provides you with the version required.

It’s simple, no need to install or even worry about it, simply play the game from your phone, tablet or desktop.

This game has an assortment of features with free spins, multipliers, buy the bonus options and a win both ways feature.

The bonuses include the Genie Lamps, Genie Parade and Genie Wishes. Read on for how you unlock these exhilarating slot details. 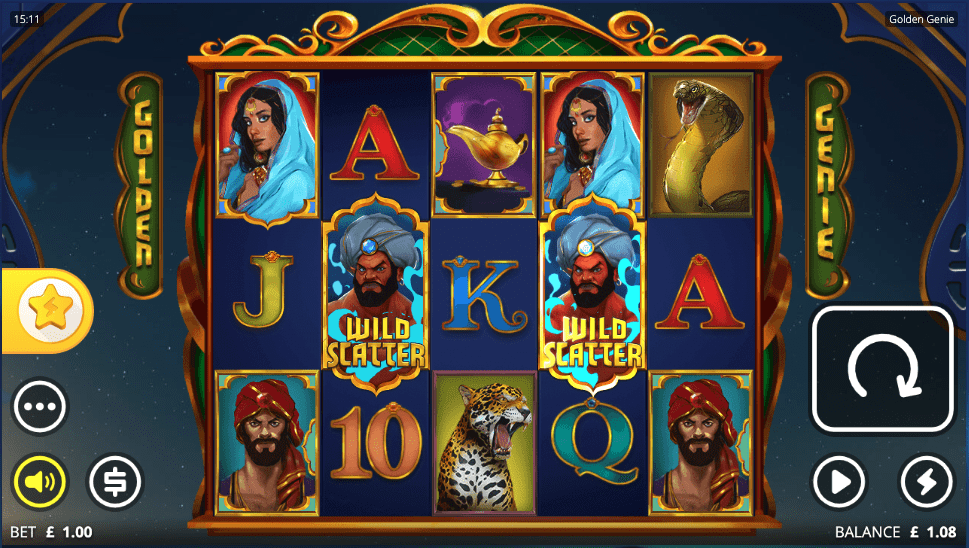 Not only is the genie a wild but it’s also a scatter symbol. Three or more on the active lines will trigger free spins. During this round a wild will multiply the amount you win by one and this continues throughout the bonus feature.

NoLimit City Software have gone all out on Golden Genie & Walking Wilds Slot, these wilds go for a walk. In other words, they shift to the left each spin until they disappear. If it becomes a lost genie then another one on the reels will take over the multiplying value and continue to increase the multiplier.

This is an unusual type of bonus spins and one that we certainly love.

It’s different to a general online fruit machine especially with one bonus feature allowing spins to be paid from either side.

The five-reel outfit comes with 20 paylines and lots of bonuses. You’re able to stake as little as 20 pence and as much as £100.

Golden Genie & Walking Wilds is a product of NoLimit City, who have lived true to their name on this one.

They have certainly delivered on this NoLimit City title, it comes with a number of different bonuses and unusual features. After trialling the game with a sceptical eye, we were happy with not only the features but the various functions ensuring that it runs smooth.

It is seamless in design and has fast loading times.

What is Golden Genie and the Walking Wilds Slots RTP?

The Golden Genie & Walking Wilds RTP is 96.03% but this can increase during the free spins.

When you land the free spins feature, you’re able to embrace an increased RTP of 96.36%, a nice touch by NoLimit City.

New customers may be unaware of the Return to Player but it is an important factor of all slots. It gives an idea of how likely Golden Genie and the Walking Wilds is to payout per spin.

Golden Genie and the Walking Wilds is of medium variance.

That basically allows you to revel in regular wins and still play for some magnificent winning combinations too.

This one caught our attention, not only because of the striking theme based on the genie that we love so much but because of the many bonus features. There’s more than one and they’re also different to what we’re used to seeing. Sit back and enjoy the Genie Parade, Genie Lamps and the Wishes. This Golden Genie comes into action granting all kinds of desires in this game.

Try to land a huge jackpot and make the most of this slot from NoLimit City. You’ll be able to embrace wilds and free spins.