Novomatic presents a multi-coloured royalty that consists of a generous king through Rainbow King slots.

Rainbow King Slots is a 5-reel, 20 payline, online video slot game, powered by Greentube. The low variance casino game has an RTP of 95% and a Cartoon theme. Bonus features, such as Rainbow King Wilds, Cash Castle Scatters and the King Cash Bonus, could help you win up to a maximum of 12,500 coins!

Dive in to find out more through this Rainbow King Slot Review!

Play the game at the best casino sites. From our research, we have created a list of the Rainbow King Slot Sites and casino sites in January 2022:

Rainbow King is a video slot game from Novomatic with a theme inspired by the multi-coloured arc made by the dispersion of light in water droplets.

It has many impressive bonus features such as the Rainbow King feature, King Cash feature, and the Cash Castle feature.

The Rainbow King slot takes players to the kingdom of colours.

A magnificent rainbow can also be seen adorning the upper part of the game screen.

There are five vertical reels in the Rainbow King slot, displaying three symbols each.

The symbols include the card symbols designed with royal colours.

Colourful gems and sparkling crowns can also be seen filling the reels.

For more details regarding the game, players can click on the More Info button.

Players can enjoy playing Rainbow King on their computer since this slot is compatible with Mac, Windows, and Linux.

The Rainbow King slot offers special features, including the following:

This special symbol can replace other symbols in the game apart from the Rainbow King, the Castle, and the Crown icons to help players form more winning combinations.

This special feature can be triggered by landing at least three Rainbow King symbols.

By clicking on the Spin button, the player will then be moved around the feature board, and a die will be thrown.

Each square that the player lands will correspond to different prizes.

This is another special feature in the game which can be activated by landing at least three Castle symbols.

During this round, the player gets to choose a castle to reveal a prize.

This round can be triggered by getting at least three Crown symbols on the second, third and fourth reels.

During this round, the player gets to select one of the twelve Crowns to reveal a prize.

Players can utilize the Rainbow King slot game’s Autoplay feature to turn the reels without interruption.

Landing the Rainbow King square will take the player to a small slot game which he can play when his character lands on the Take the Money square. 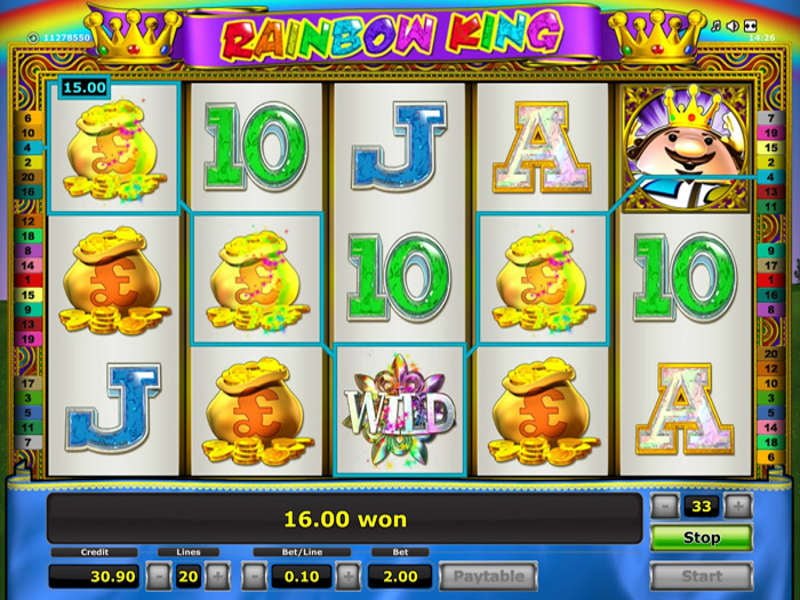 The Free Spins will then play out.

The Rainbow King bonus feature will end when a symbol other than a seven appears. 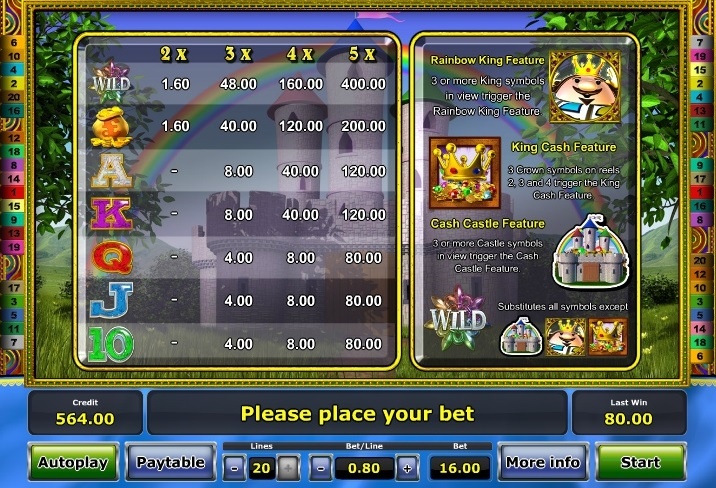 The Rainbow King slot game also boasts a maximum possible payout worth a whopping 250,000 coins by waging the maximum bet on all bet lines.

Novomatic has the goal of providing top performing game content and an industry-leading range of proven video slot classics along with new highlights and internationally famous player favourites.

What is the Rainbow King Slot’s RTP?

The Return to Player for Rainbow King is 95%.

This payout percentage for the Rainbow King slot means that there is a theoretical return of 95 coins for a 100-coin wager.

The Rainbow King video slot game has a low variance.

This slot variance means that this slot game pays out frequently.

All in all, the expertly drawn graphics and fun animations of Rainbow King along with the helpful bonus features mentioned above make this game highly recommended to slots players.