What’s life without a little magic? It can always help make things easier. Magic can make brooms sweep up messes, it can turn pumpkins into carriages, and it can even make winning combinations appear out of thin air.

Now, not everyone can be a Harry Houdini but with a little sleight of hand and a handful of some scatters and wilds to help, players can get a multitude of coin wins and maybe even the jackpot prize! Find out how you can razzle-dazzle your way into some wins when you read this 5x Magic Slot Review.

From our research, we have created a list of 5x Magic Sites in June 2021:

Magic can be simple, but at the same time, magic can be complex. Thanks to Play’n GO, players can access some real-life magic in this three-reel, five pay-line classic slot game. This old-school looking slot game brings the good old symbols that every slot player is used to seeing and coupling it with great graphics and an exciting theme that’s bound to get players hooked.

The game starts by bringing players into a stage, much like the ones magicians get on when performing their tricks. The game’s logo is emblazoned above the reels in big, gold, glorious letters while the reels themselves are framed with a thin gold frame that makes it look like three mirrors standing side by side.

As the game rolls on, the ever familiar pings and clicks of classic slot games can be heard, with a loud ping ringing whenever winning combinations are made.

Now, although the game has to do with magic, it doesn’t involve a magician. Instead, he remains as one of the symbols of the game. He, along with his top hat and the several bar symbols, serves as the game’s paying symbols. Landing a number of these can result in some stellar payouts!

So, wave your wands and practice those tricks. The magician’s coming to town, and he’s bringing five times the magic and five times the payouts! So, make sure to make use of the wilds and scatters that he brings to enjoy the magic thoroughly.

To become a good magician, here’re a few tricks to remember:

When playing this kind of slot game, it’s best to set the amount to bet, the coin value, and the number of lines to play first. This can all be toggled on the bottom part of the screen. Although, if you can’t decide, you can always click on the “Max Bet” button to set the maximum allowed amount per round. Once you’re happy with your amounts, you can either click the Spin button to play one spin or the Autospin button for uninterrupted gameplay. 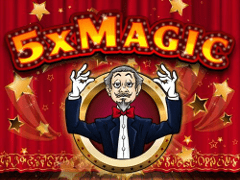 Watch your wins grow from nothing into something when you play the game on any mobile (Apple or Android), tablet, or PC/ Desktop device.

Wilds. The gold x5 symbol represents the wild symbol. This symbol can pay players a 5x multiplier when it appears once on the reels and 25x multipliers when it appears twice. This can also replace any symbol apart from the scatter to make winning combinations.

Scatters. The scatter symbol is represented by the top hat or magician’s hat. Any wins made with a scatter will be multiplied by the total bet. Also, this, in turn, will be added to the total win.

Magic is an art that needs to be honed and practised. And, just like any skill or talent, this comes with its own set of challenges. So, in this game, players can rely on the wilds and scatters as there are no free spins to be had. This may make it extra challenging to land some adequate amounts, but that’s part of what makes this game so worthwhile.

Magic is for everyone and for 0.50 to 25 coins per spin, about anyone can become as great as David Blaine. Of course, with a 5,000 jackpot prize at stake, who wouldn’t want to try their hand at magic? 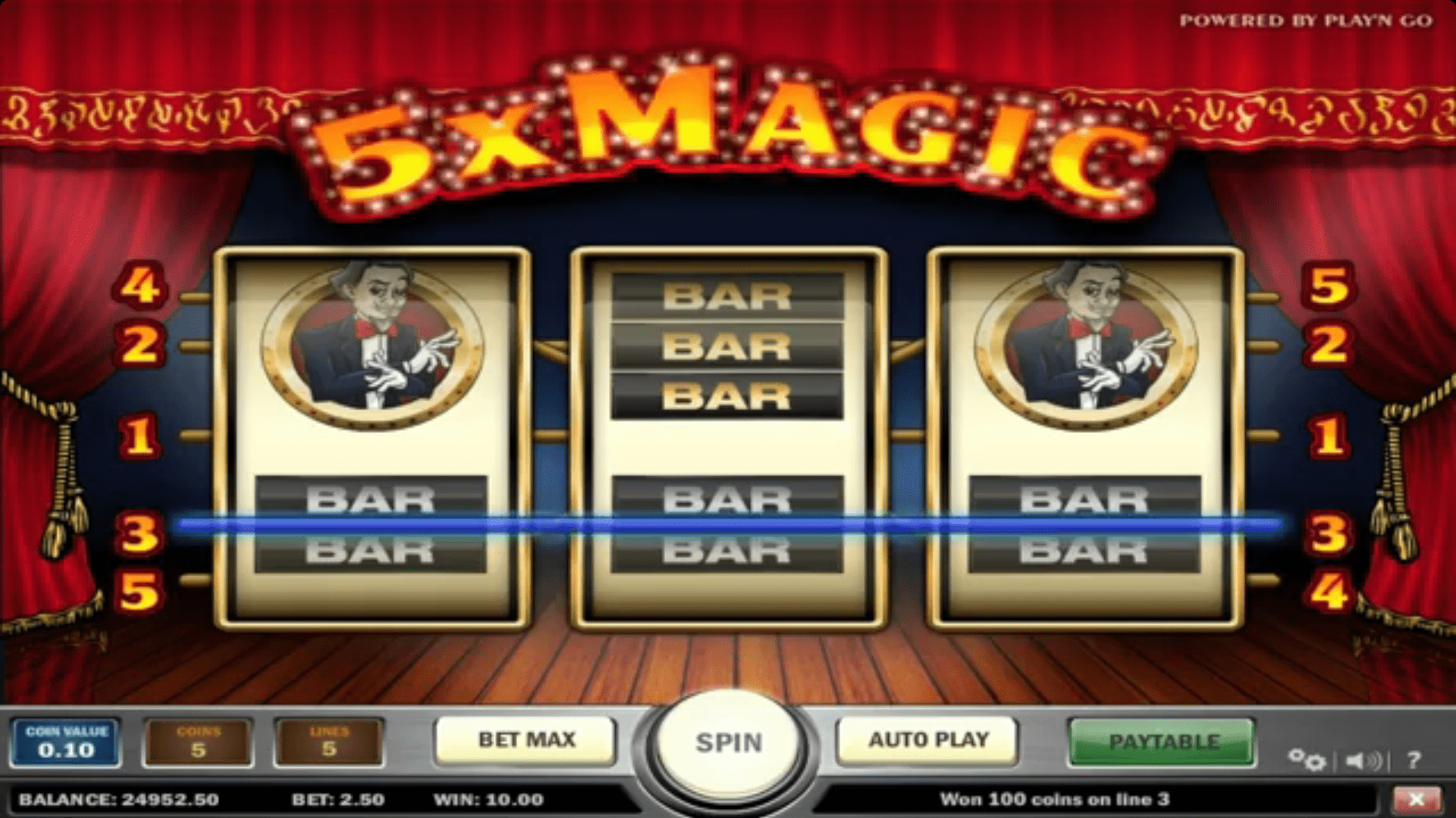 Apart from the wilds, scatters, and jackpot prizes, players can win some reasonable payouts from the bar symbols and the symbol of the magician as these are all the paying symbols. By landing 1 to 3 of a kind of single, double, triple bars, or even a mix of all, players can win anything between 5 to 30 coins. Meanwhile, by landing 3 of the magician can bring players 50 coins.

5x Magic is a slot game that was made possible by Play’n GO.

What is 5x Magic Slot RTP?

This game has a fair Return to Player rate. So, that means that players can expect to get a return average of £95 per £100 bet.

This fun online slot is a medium variance game. With this kind of variance level, players can expect to land some pretty decent amounts in a semi-frequent manner.

This is one classic slot game that’s an oldie but still a goodie. The game may only have a handful of bonus features to choose from, but that’s what ups the challenge of the game. So, players of the more experienced nature may find this more enjoyable as it does take a certain level of skill and patience to land the more massive amounts. Although, newbies may still find this game quite lovely as it is pretty straight forward with no additional mini-games to pull the focus away. If you’re in the mood to magic some wins your way, then this is the slot game to try out.