Step into the royal grounds, up through the brick staircase, between the pathway guarded by the dog statues that stand in sentry to protect the riches in the palace. Will you find the jackpot within the palace walls in January 2022?

Prosperity Palace Slots is a 5-reel, 10 payline, online video slot game, developed by Play ‘N Go. The low variance casino game has an RTP of 94.23% and an Asian theme. Bonus features, like Golden Buddha Scatters, Jade Dragon Wilds and the Prosperity Palace Bonus, can help you win 5000x your stake!

Learn how to land the big wins with wild symbols, scatter symbols, and a free spins round in this Prosperity Palace Slot Game Review.

From our research, we have created a list of the Best Prosperity Palace Slot Sites in January 2022:

Prosperity Palace Slot is an oriental-themed slot game. The game works around the concept of fortune and riches.

The game is inside an oriental palace with sloping green roofs and tall red pillars decorated with green jade. The reels are between two pillars with golden Fu dogs standing guard on either side of the reels.

A traditional Asian soundtrack with stringed instruments, bells, and flutes accompanies Prosperity Palace Slot. The colour schemes in the game are in deep, rich reds and golds with touches of greens, blues, and pinks.

To start playing the Prosperity Palace Slot, a player has to set up the game.

The Prosperity Palace Slot can be accessed on desktop computers, mobile phones, and tablets.

The high paying symbols in the game are archetypal oriental icons that were believed to bring luck and wealth. This includes Chinese gold coins and a little boy riding an orange carp. The highest paying symbol in the game is the little girl riding a golden carp.

Prosperity Palace gives its players a bonus spin round. 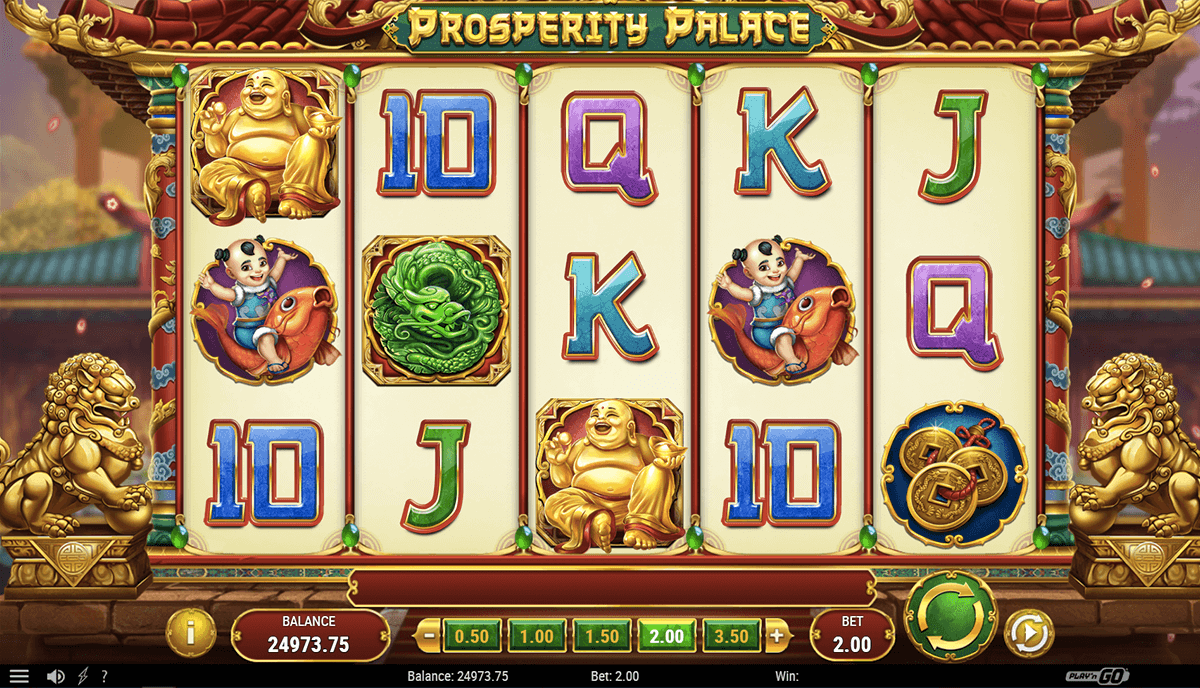 To win at Prosperity Palace Slot, a player has to line up at least three matching symbols across an active payline. Only the highest paying winning combination across a payline is paid.

A player has up to 10 ways to win in Prosperity Palace Slot on every spin. A player can win up to 5000x the current bet.

The games that Play’N Go has released are programmed to come in 30 languages. Play ‘N Go has been able to produce over 50 games in recent years.

What is the Prosperity Palace RTP?

This rate estimates how much a player can expect to win back from the game. It predicts that for every 100 pounds placed as a bet, a player may receive 94.23 pounds in return.

What is the Prosperity Palace Slot Variance?

Prosperity Palace Slot is a game with low variance. This variance rate predicts that low paying wins are more often rewarded to the player. Playing the game longer means more chances to win.

Prosperity Palace Slot has the features that can be found in most modern slot games. The gamble feature and the free spins bonus increase the players chance of winning more from the game. Adding a progressive jackpot may help make the game more popular.

Prosperity Palace is a place where good fortune abound in January 2022.