7 Sins Slot Game is a Horror-themed, 5 Reel, 243 payline slot that is ran on the Play’n Go slot software. With an RTP of 96.28%, awesome bonus features like the Pandora’s Box Free Spins and Second Chance Bonus, and high variance, achieving the max win of £111,200 couldn’t be any easier!

Why resist when you can give in? Spin the reels so the game can begin. In this video slot game, many wins can be gained, but the question is, after going through all seven sins, which one will remain?

Befriend all the vices and see just how they can help you gain as many winning combinations when you read this 7 Sins Slot Review.

From our research, we have created a list of 7 Sins Sites in June 2021:

Sin is definitely a very tempting mistress who’s difficult to dodge. But imagine how much more difficult it is when sin presents you with a game with an aura of seductive mystery? With Seven deadly sins to choose from, which will get you the most out of this five-reel, 243 pay-line video slot? Will it be pride, greed, lust, envy, gluttony, wrath, or sloth? Any of these are powerful enough to push anyone to make as many wins as possible.

Question is, which one will be of most help to you? Will this sin tempt you to gamble what you have, or will it make you shy away from the sins?

In this fun spin on vices, Play ‘N Go aims to bring players a brilliant gaming experience by making the vices human. Each one of the deadly sins is represented by a beautiful woman clad in victorian era clothing, each one more colorful than the last.

There are over 243 ways to win in this casino slot game, and one way to win some good amounts is with the help of the bonus features such as wilds, double wilds, scatters, free spins, second chances, and even a jackpot prize.

Since the deadly since technically belong in hell, the game is set in an inferno looking background, with an intricate golden frame surrounding the actual reels. The sins are each represented by a beautiful, beguiling woman. This woman dripping in gold represents greed.

Lust is represented by a vixen of a woman, wrath is seen in a woman dressed in bright red with glowing green eyes, gluttony by a woman gobbling up a snack, a woman clad in a rich green dress represents envy, sloth by a beauty sleeping, and vanity by a woman immersed with looking at herself in the mirror.

It’s easy to be lured into this game, not just by the 158,000 coin jackpot prize but by the handful of beautiful women who make up for the paying symbols.

The game’s bonus features also allow for a fun and enthralling gaming experience, especially since, throughout the game, players are treated to full sights of each lady as each one of them grace the reels with their presence.

So, if you think you can avoid temptation and go for the prizes ahead, then take this reel for a spin.

How to Play 7 Sins Slot Online

Before dealing with the deadliest sins personified, here are some helpful tips to remember:

Deal with temptation on every spin when you play this video slot game on any mobile (Apple or Android), tablet, or PC/ Desktop device.

Wilds. This game has two types of wilds, both of which can replace any symbol apart from the scatter symbol.

Scatters and Free Spins. Pandora’s box represents the scatter symbol. Landing 3 of these will result in free spins where players will be able to see the vices.

Second Chance Feature. By landing the scatter symbol twice in one spin, players will be able to trigger the Second Chance bonus game. During this feature, players will have to pick 1 out of the seven sins’ symbols. Players can win anything from extra scatters to help trigger free spins, a cash prize, or a multiplier prize.

Pandora’s box known is known for unleashing unimaginable chaos and turmoil, but this is one instance where you’d want to get as many of them as possible as landing 3 of these can trigger the free spins round. During this feature, players can win over seven free spins.

Now, this may seem like a small amount, but during each spin, 1 of the seven sins will be randomly chosen, and she will fill the entire third reel. Also, during this round, players can win multipliers, which only increase with every spin.

Who knew you’d actually want to pay be greeted by sin? In this case, for 0.20 to 100 coins per spin, you can meet all of the sins. Each one of these sins is deadlier than the last. 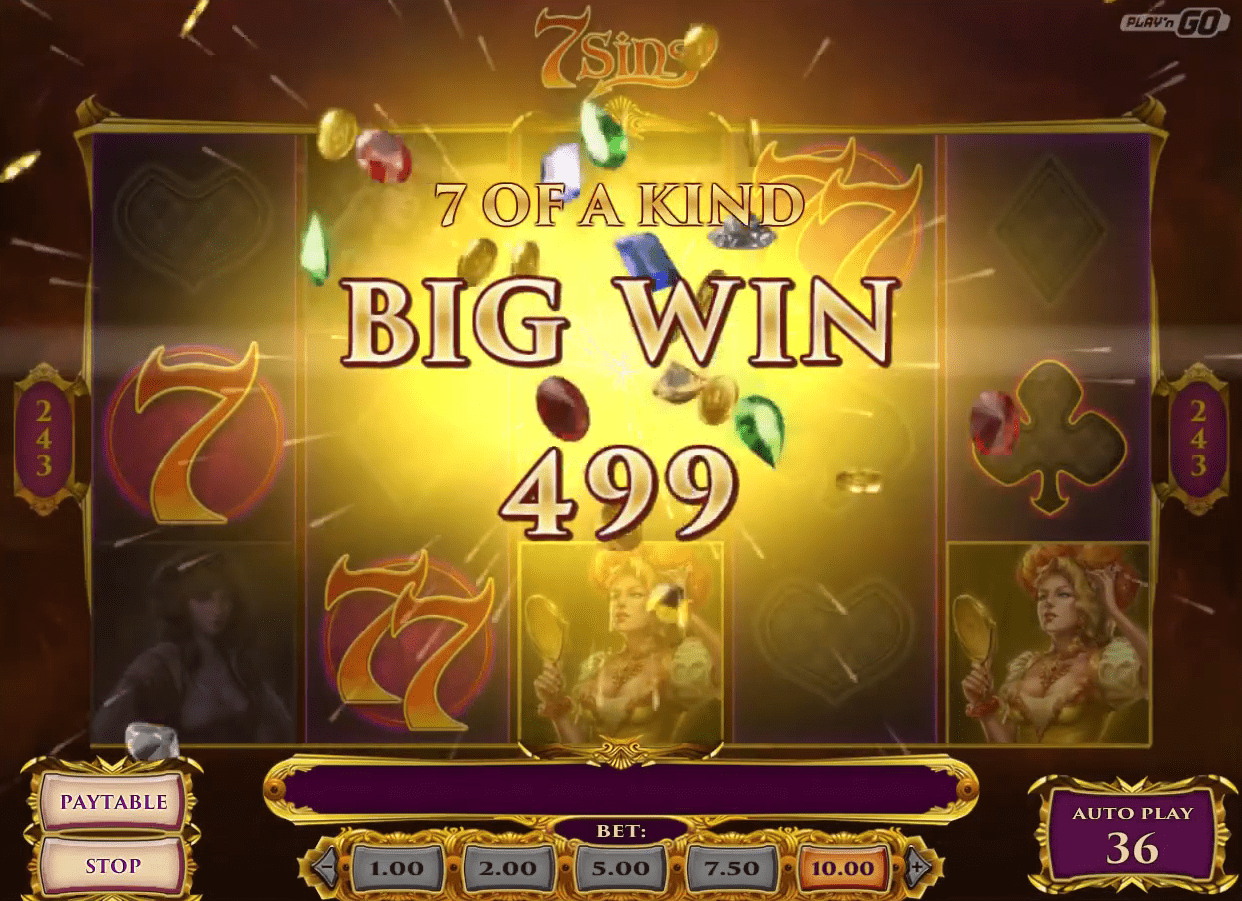 Now, these lovely ladies all act as the higher-value symbols that can award players a minimum of 0.60 and a maximum of 500 coins.

Meanwhile, the red and black card symbols (hearts, diamonds, spades, and clubs) act as the lower-value symbols. These symbols can bring players anything between 0.20 to 70 coins whenever 3 to 7 of a kind land on the reels.

7 Sins is a slot game that was made possible by Play’n GO.

The games made by the Play’n GO team is known for being thrilling as they are made for players by players. After all, they tailor their games to delight and entertain their players.

This tempting game’s RTP or Return to Player rate gives players a chance to win as much as £94 for every £100 bet. This is pretty great, given that the game is pretty volatile. Patience may be a virtue, but sins can be more generous.

This fun slot is a high variance game. That means the game rarely gives payouts, although it does provide players with pretty generous amounts throughout the game.

This slot is one of those unexpected games that just wow players at every turn. Everything from the graphics, the payouts, and the beauty of the theme is enough to lure players in for hours of gameplay. 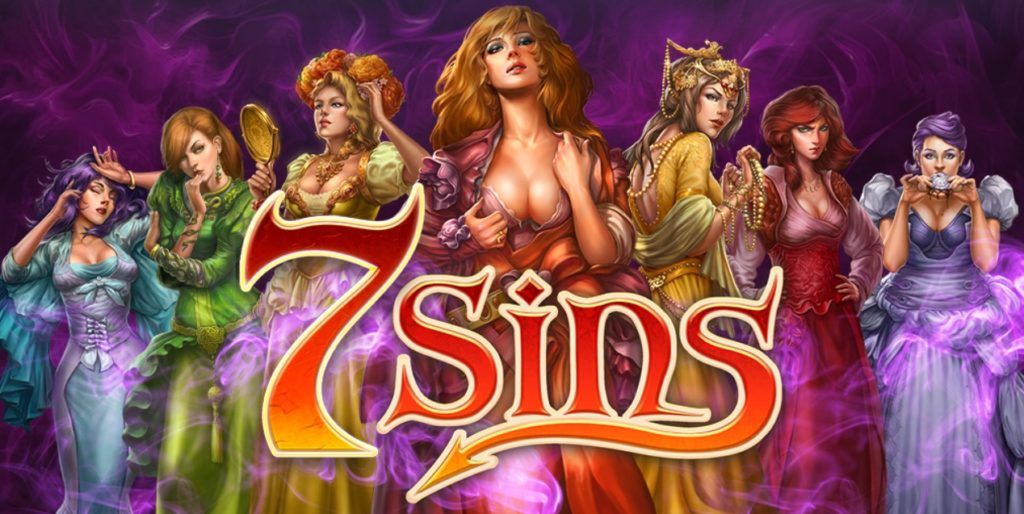 Although the slot is pretty volatile, players with more experience may find this more thrilling to play than those who are still getting a feel for slot gaming. Nevertheless, this game remains a joy to play as it provides players with a great gaming experience and the chance to win a whopping jackpot prize.