Flip these old-school reels to play a more modern gaming experience with shiny new symbols and a lot more convenience. Will you land the same big wins with this new game in January 2022?

Super Flip Slots is a 5-reel, 20 payline, online video slot game, powered by Play ‘N Go. The medium variance casino game has an RTP of 96.53% and a Retro theme. Bonus features, like Purple Wilds, Super Flip Logo Scatters and Super Flip Respin, can help you win up to 10,000x your stake in real cash!

Find out how the perfect combination to land a twist and spin with wild symbols, scatter symbols, and free spins round in this Super Flip Slot Review.

From our research, we have created a list of the Best Super Flip Slot Sites in January 2022:

Super Flip Slot is a video-based slot-type game. The game has five reels and up to 3 lines for each of the reels. Play ‘N Go released on the 11th of June, 2015.

The game is set over a golden bokeh background. It is accompanied by an action-packed soundtrack with old-school sound effects. The colour schemes in the game are in bright, clear shades and tones. The different visual elements in the game complete the ambience and set the mood and the scene of the gameplay right away.

The symbols that form winning combinations are highlighted. The transitions and animations in the game are seamless. The visual and audio graphics of the game give the player nostalgia.

To start playing the Super Flip Slot, a player has to set up the game.

The Super Flip Slot is fully optimized to be accessible on different platforms. The game is playable on a desktop computer, on tablets, and on mobile phones. It is compatible with both Apple and Android devices.

The low paying symbols in the game are the four traditional playing card suits. These symbols include the pink diamond and the blue club. It also includes the red heart and black spade.

The high paying symbols in the game are a mix of classic slot game icons. These symbols include the classic strawberry, four-leaf clover, metal horseshoe, and the golden star.

The highest paying regular symbol in the game is the diamond. Landing the diamond symbol on all five reels across an active payline pays 250x the current line bet. 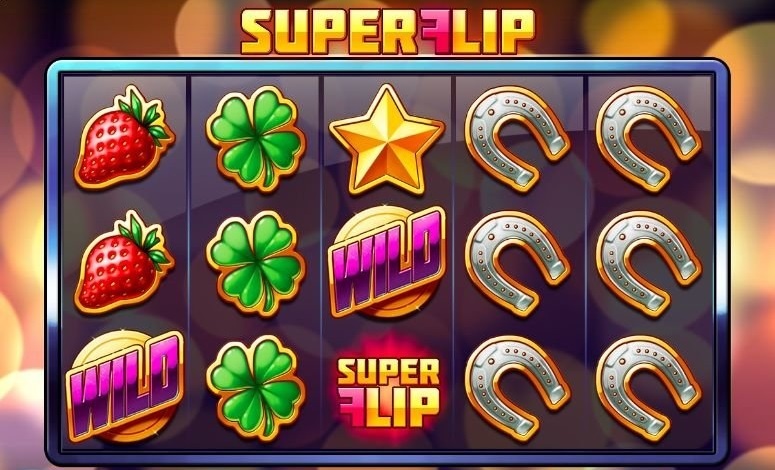 The wild symbol can also trigger and retrigger this feature.

Super Flip gives its players a bonus spin round.

The scatter symbol also pays on its own. The scatter payouts are multiplied to the total bets and then added to the line wins.

To win at Super Flip Slot, a player has to line up at least three matching symbols across an active payline. Players can adjust the number of active paylines to fit their preference. Only the highest paying winning combination across a payline is paid. 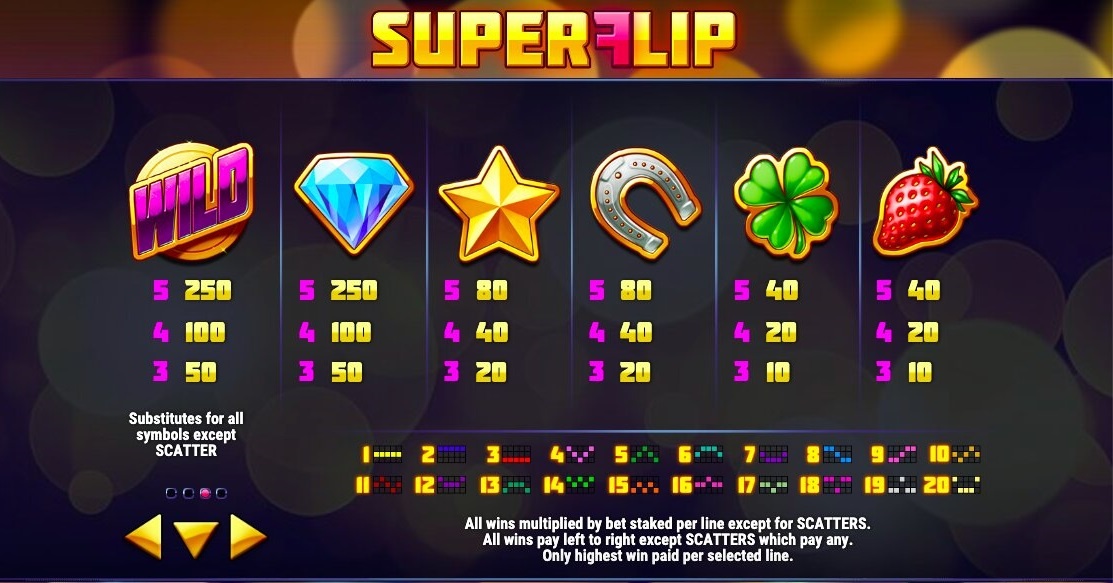 The paylines in this game only pay one-way. The winning combination has to form from the leftmost reel to the rightmost reel.

A player has up to 20 ways to win in Super Flip Slot on every spin. A player can win up to 10000x the current stake.

Play’N Go first started in the industry as a supplementary developer for bigger companies in 1997. By 2005, Play’N Go has started to operate independently.

What is the Super Flip Slot Game RTP?

This rate estimates the amount that a player can get in return from the game. It predicts that for every 1 pound placed as a bet, the player may win back at least 94 pence.

What is the Super Flip Slot Game Variance?

Super Flip Slot is a game with a medium variance. This variance rate promises players that average pays are regularly awarded.

Super Flip Slot is a nostalgic game with a contemporary presentation in January 2022. The features of the game are relatively common. The flipped reels are an interesting detail.

Including a progressive jackpot in the game can make it more popular with a wider audience. Super Flip Slot awards big wins in every way, right side or flipped.