Slip deep into the hidden chambers of a pyramid where the story of the ancient Egypt Pharaohs is told in script etched on gold pillars. Will you be able to decrypt the legends to find where the jackpots are kept in September 2021?

Legend of the Pharaohs Slots is an Egyptian themed online video slot game, powered by Barcrest Software. This medium variance casino game has 5 reels, 20 paylines and a RTP of 96.1%. Bonus features, such as Blue Pyramid Scatters and Legend of The Pharaoh Wilds, can help you win up to £250,000!

From our research, we have created a list of the Best Legend of the Pharaohs Slot Sites in September 2021:

About Legend of the Pharaohs Slot

Legend of the Pharaohs Slot is an Egyptian-themed slot game. It tells the story of the legacy that the Pharaohs left behind from ancient Egypt.

The game is set deep inside the dark chambers of a pyramid with towering pillars encrypted with hieroglyphics. The colour schemes in the game are in luminous shades of deep blues and golds.

The different visual elements in the game complete the ambience and set the mood and the scene of the gameplay right away. The symbols that form winning combinations are also highlighted. The transitions and animations in the game are seamless and give a complete gaming experience with visual and audio graphics.

How to Play Legend of Pharaohs Slots Online

To start playing the Legend of Pharaohs Slot, a player has to set up the game.

The Legend of Pharaohs is compatible with different devices of various screen sizes, both Apple and Android devices.

The Legend of Pharaohs Slot gives its players several special features that can help a player win more prizes. 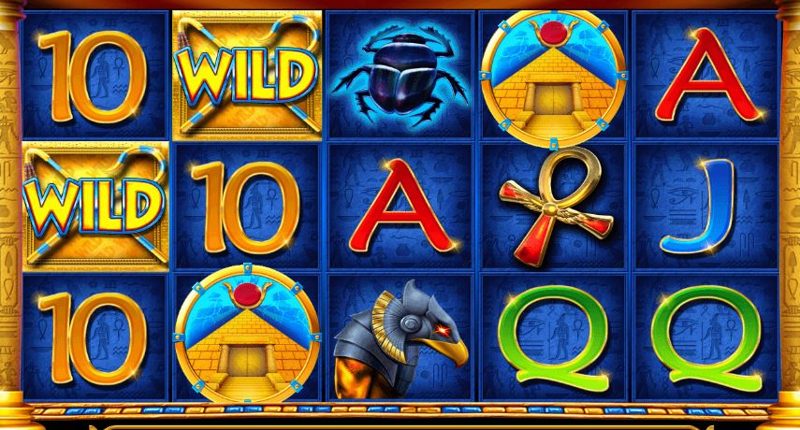 The low paying symbols in the game are traditional royal playing card symbols. This includes the 10, Jack, and Queen. It also includes the King and the Ace.

Meanwhile, the average paying symbols in the game are iconic Egyptian figures. This includes the scarab and a robotic falcon. It also includes the Eye of Horus.

The high paying symbols in the game are the Ankh and the game logo. 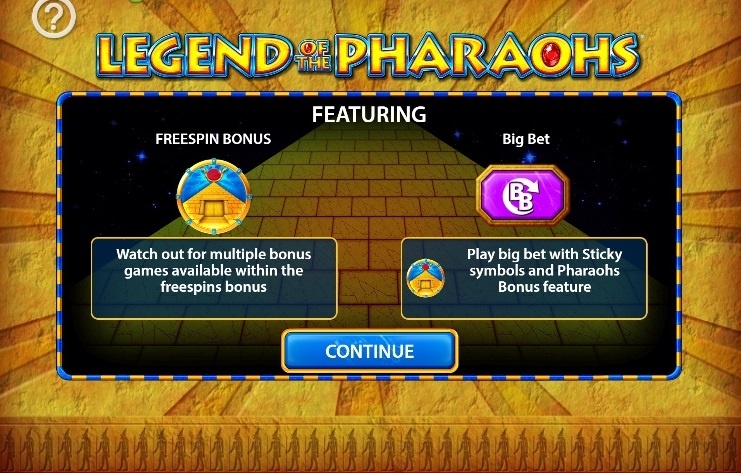 The elimination of winning combination always starts from the symbols with the lowest pay. One single bonus round may have up to 5 win eliminations.

The Colossal symbol will remain colossal for the whole free spins round or until a new bonus is active.

To win at Legend of the Pharaohs Slot, a player has to line up at least three matching symbols across an active payline. Only the highest paying winning combination across a payline is paid. 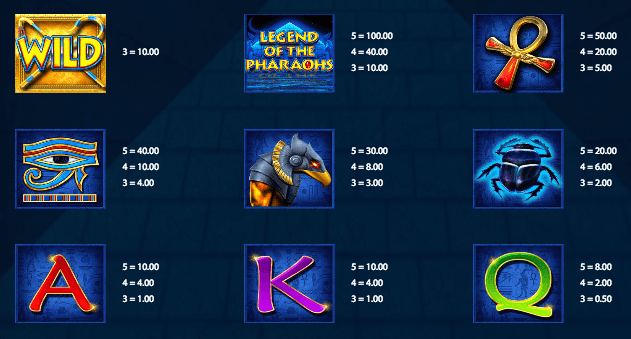 A player has up to 20 ways to win in Legend of the Pharaohs Slot on every spin.

Legend of the Pharaohs Slot is powered by Barcrest Software.

Barcrest may be one of the oldest software developers in the industry, being established in the UK in 1968. Barcrest still stands strong today, producing games that are at par with the game released by their more contemporary peers.

What is the Legend of the Pharaohs Slot RTP?

This is a fair estimate of the returns that a player may gain from the game. It predicts that for every 1 pound placed as a bet, the player may win back 96 pence every time they play the game.

What is the Legend of the Pharaohs Slot Variance?

Legend of the Pharaohs Slot is a game with a medium variance. This variance range predicts consistently awarded average pays in the game. Playing the game longer means having more chances to win bigger prizes whenever they play Legend of Pharaohs Slot.

Legend of the Pharaohs Slots gives players another take on the classic slot game theme. The different bonus features, like the colossal symbol, the free spins wild symbol and the big bet feature, help the player win more from the game in September 2021. The most notable feature in the game would be the free spins round where players may activate the other bonus features.

Adding a progressive jackpot to the game may help increase interest in the game. All things considered, Legend of the Pharaohs is a fun game worthy of a Pharoah.