Travel back in time and walk through the towering halls of pyramids when they were just newly built to meet the beautiful and legendary Cleopatra. Will your luck be enough to gain the favour of the queen in January 2022?

Ancient Egypt Slots is an Egyptian-themed slots game powered by Pragmatic slot software. Learn how to read the hieroglyphs to find the hidden jackpot with a wild symbol, a scatter symbol, bonus features, and a bonus free spins round, all adding to the Ancient Egyptian experience.

So what are you waiting for? Find out more about this great slot game in our Ancient Egypt Slot Review.

From our research, we have created a list of the Best Ancient Egypt Slot Sites in January 2022:

Ancient Egypt Slot is an Egyptian-themed slot game. It works around the culture and life in the golden era of ancient Egypt when Cleopatra was ruling.

Ancient Egypt Slot is a video slot-type game. The game has five reels and up to 3 lines for each of the reels. The Pragmatic Play slot was released on the 24th of January.

The game is set inside a prehistoric architecture lined with towering pillars with hieroglyphs and decorative geometric prints accompanied by a traditional-sounding soundtrack with percussions and bells. The colour schemes in the game are in rich purples and pinks with touches of gold.

The visual and audio graphics of the game sets the mood and the scene of the gameplay right away. The symbols that form winning combinations are also highlighted. The transitions and animations in the game are smooth, and the different visual elements in the game complete the ambience.

Speaking of ancient Egypt, check out all of our favourite Egyptian themed slots, we have broken down the best and ways to land incredible wins.

To start playing the Ancient Egypt Slot, a player has to set up the game.

The Ancient Egypt Slot is fully optimized to be accessible on different platforms. The game is playable on a desktop computer, on tablets, and on mobile phones. It is compatible with both Apple and Android devices. 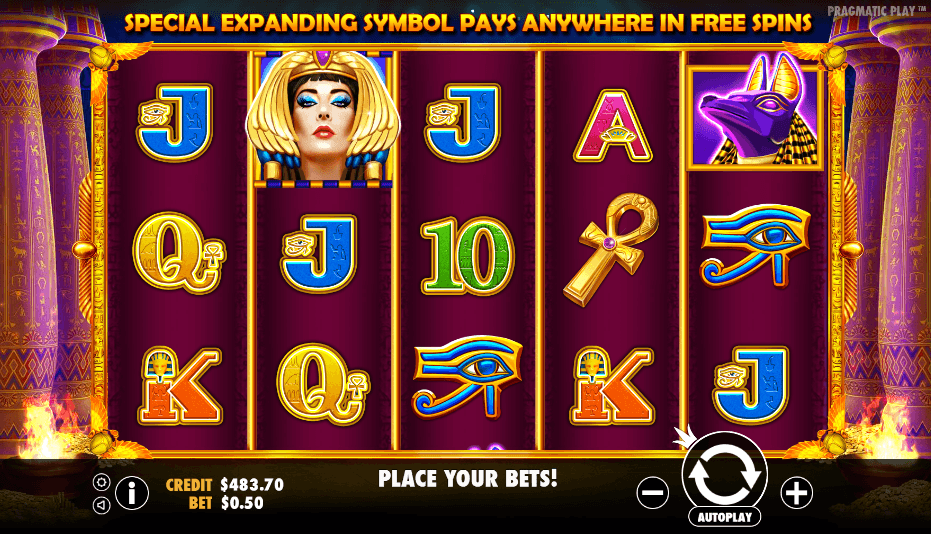 The low paying symbols in the game traditional royal playing card symbols. These symbols include 10, Jack, and Queen. It also includes the King and the Ace.

The high paying symbols in the game are iconic Egyptian items. These symbols include the Eye of Horus and a golden Ankh, the Egyptian cross. It also includes the Egyptian god, Anubis.

The highest paying symbol in the game is Cleopatra herself.

During the free spins round, after all the payline wins of the regular symbols have been paid, all the special expanding symbols on the reels expand to cover the whole reel. The symbol only expands when there are enough symbols to form a win.

To win at Ancient Egypt Slot, a player has to line up at least three matching symbols across an active payline. Only the highest paying winning combination across a payline is paid. 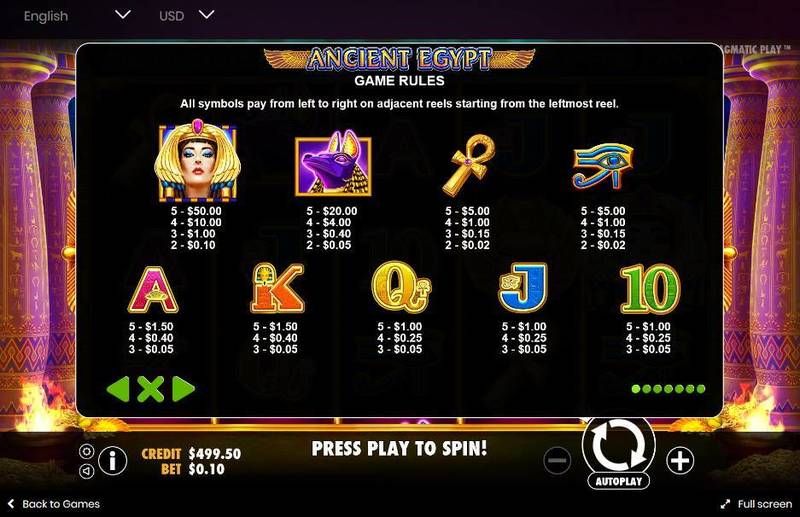 A player has up to 10 ways to win in Ancient Egypt Slot on every spin.

Pragmatic Play was founded in August 2015 with headquarters in Malta. Pragmatic Play has licenses to provide games in different casinos around the globe.

What is the Ancient Egypt Slots RTP?

The RTP of Ancient Egypt Slot is 96%.

This rate estimates the returns that a player may gain from the game. It predicts that for every 100 pounds placed as a bet, the player may win back 96 pounds every time they play Ancient Egypt Slot.

What is the Ancient Egypt Slot Variance?

Ancient Egypt Slot is a game with a medium to high variance range.

This variance range promises that average wins are more often awarded than high paying wins in the game. Playing the game longer means having more chances to win bigger prizes whenever they play Ancient Egypt Slot.

Find more high volatility slots with our full list and guide on these games.

Ancient Egypt Slot is an intriguing game. The simple gameplay is perfect for players who want a more immersive gaming experience. The Bonus Game is the most notable feature in January 2022. Adding a progressive jackpot in the game may increase interest in the game.

At the end of the day, the Ancient Egypt Slot gives players wins worthy of a pharaoh.