Speak to the mystic dragons that guard the reels to land the biggest wins in the game. Will you gain their favour and receive the luck you need to win the jackpot in October 2021?

Triple Dragon Slots is a 3-reel video slot game with 5 paylines and 3 rows. This Asian-themed casino game by Pragmatic Play has a high variance and a return to player rate of 96%. It has bonus features like Dragon Wild, Dragon Stacks, Dragon Respons, Respin Retrigger, and Triple Dragon Free Spins.

Find out how to land triple symbols to help you respin until you win, and more win this Triple Dragons Slot Review.

From our research, we have created a list of the Best Triple Dragons Slots Sites in October 2021:

Triple Dragons Slot is an oriental-themed slot game by Pragmatic Play. The game shares with its players the Asian belief that tigers are lucky animals.

The game is over a bright red shade that is considered the luckiest colour in Feng Shui. Feng Shui a practice that claims to use forces of nature to maintain balance and bring luck. A jade and gold dragon guards the reels on both sides of the screen accompanied by a festive soundtrack with percussions, bells, and flutes. The colour schemes in the game are in the shades that bring luck.

The game has some impressive storytelling that sets the mood and the scene of the gameplay right away. The different visual elements in the game complete the ambience. The symbols that form winning combinations are also highlighted, and the transitions and animations in the game are seamless.

To start playing the Triple Dragons Slots, a player has to set up the game.

The Triple Dragons Slot is playable on a desktop computer, on tablets, and mobile phones. 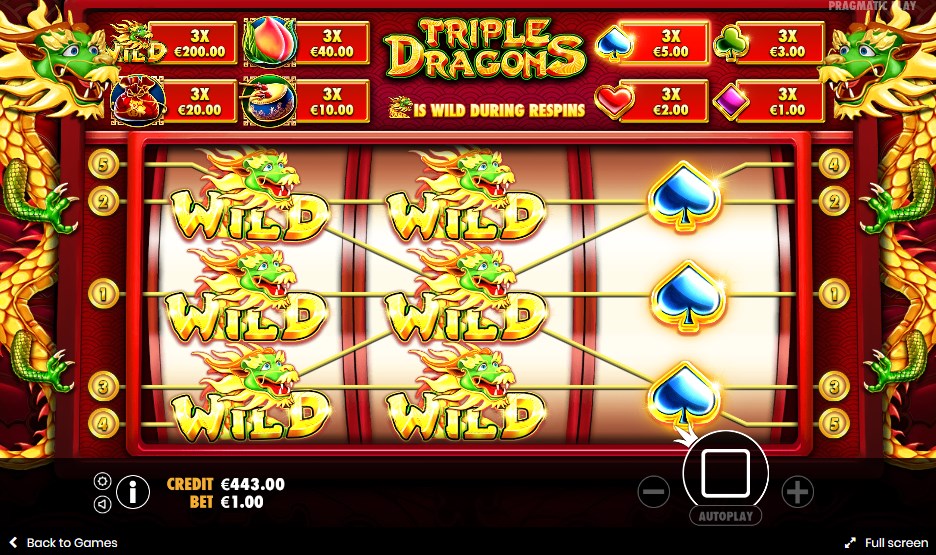 The low paying symbols in the game are the traditional playing card suits. This includes the pink diamond symbol and the red heart. It also includes the green club and the blue spade.

The high paying symbols in the game are lucky items, including a blue drum and a red pouch with gold drawstrings. It also includes a full peach with leaves.

The highest paying symbol in the game is the dragon. Landing three dragons across an active payline in a single spin award up to 3000.

To win at Triple Dragons Slots, a player has to line up at least three matching symbols across an active payline. Only the highest paying winning combination across a payline is paid. 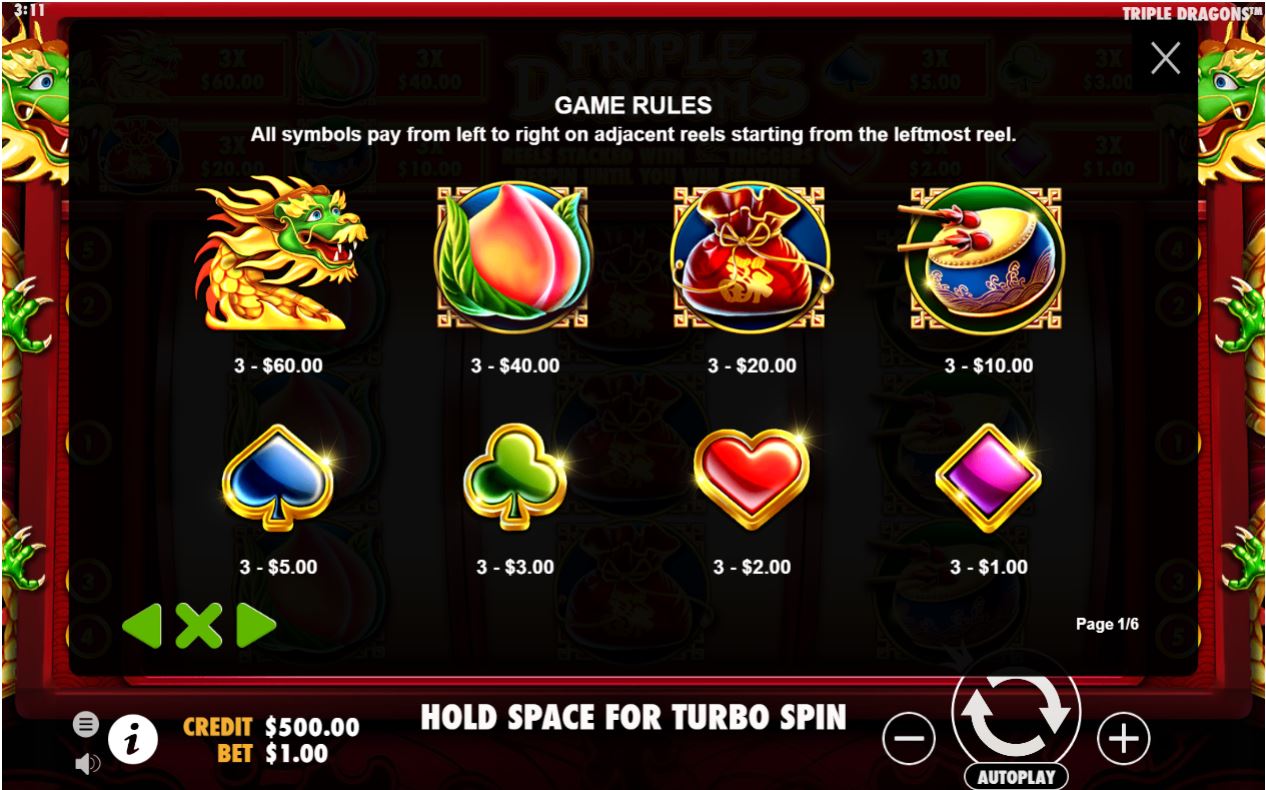 A player has up to 5 paylines and ways to win in Triple Dragons Slot on every spin.

Pragmatic Play has a wide collection of games that are meant to cater to players of different tastes and budget range. By 2017, all the effort of Pragmatic Play to stand out and offer something to every player paid off when they were recognized as the Software Rising Star of the year.

What is Triple Dragons Slot RTP?

The RTP of Triple Dragons Slot is 96%.

This RTP rate estimates the returns that a player may expect to gain from the game. It predicts that for every 100 pounds placed as a bet, the player may win back at least 96 pounds every game.

What is the Triple Dragons Slot Variance?

Triple Dragons Slot is an exciting game. The simple gameplay and archetype; features are perfect for players who prefer the classic gaming experience in October 2021. The most notable of the bonus features in the game is the Respin Until You Win.

Adding a progressive jackpot may increase the popularity of the game. All things considered, Triple Dragons Slot is a game that gives players all the luck they can get.