Prowl between the towering rock mountains basking in the warm glow of the setting sun.

Will you befriend the wolf and the majestic creatures that guard the treasures of the land?

Wolf Gold Slots is a 5 reel slot game with 25 paylines, and an animal theme. Powered by Pragmatic software with an RTP of 96%, this casino game comes with a jackpot, free spins feature and wilds. The game’s symbols include a Bison, an Eagle, a Horse, and a Panther.

Find out how to gain the elegant wolf’s trust with wild symbols, scatter symbols, bonus features, bonus money respins round, and a bonus free spins round in this Wolf Gold Slot Review for September 2021.

From our research, we have created a list of the Best Wolf Gold Slot Sites in September 2021:

It tells the story of an alpha wolf protecting his stash of gold.

The game has five reels and up to 3 lines for each of the reels.

The game is set in a rocky mountain range, accompanied by an action-packed soundtrack with animal sounds.

The colour schemes in the game are in rich, warm earthy shades with pink and purple highlights.

The visual and audio graphics of Wolf Gold Slots give the player a mixture of wonder and excitement.

To start playing the Wolf Gold Slot, a player has to set up the game.

The Wolf Gold Slots is compatible with different devices of various screen sizes.

It can be accessed on desktop computers, mobile phones, and tablets.

It is compatible with both Apple and Android devices.

The different symbols in the game bathe in the same pink and purple glow as the other elements in the game.

The low-paying symbols in the game are traditional royal playing card icons.

This includes Jack and the Queen.

It also includes the King and the Ace.

The high-paying symbols in the game are the different animals that can also be found in the rocky mountains.

This includes the horse and the panther.

It also includes a bald eagle and a buffalo.

The wild symbol in the game is the wolf.

The wild symbol can substitute for other symbols in the game to complete winning combinations.

The only symbols it cannot substitute for are the scatter and the money symbols.

The bonus money symbol in the Wolf Gold Slots is a blue-corn moon with a purple shadow.

These Money Moon symbols appear on all reels.

During every spin, the Bonus Money Moon Symbols take a random value from a predefined set or the Mini and the Major Jackpot.

After all the wins in the triggering spin have been paid, the other symbols fade, leaving the Money Symbols on the reels.

During the Money Respins, the player starts with three respins.

Only Money Symbols spin in the reels.

All Money Symbols that land stick on the reels until the end of the round.

Every Money Symbol that lands on the reels award another extra 3 respins.

The feature ends when all respins are used or when the entire reel fills with Money Symbols.

At the end of the respins, the player receives the total of all the prizes on the Money Symbols.

When the player manages to land 15 Money Symbols on the reels, the player receives the Mega Jackpot.

The Autoplay option lets a player spin the reels for several turns without interruption.

A player selects the number of turns they want to spend the reels spinning.

The scatter symbol in the game is the rocky mountain range over the setting sun.

Landing 3 scatter symbols on the reels in a single spin triggers the free spins round.

The scatter symbol also pays on its own.

When the free spins round starts, the player is taken to another screen.

During the free spins round, reels 2, 3, and 4 spins together to form a giant symbol.

During the free spins round, landing three or more scatter symbols on the reels award an extra three free spins.

To win at Wolf Gold Slot, a player has to line up at least three matching symbols across an active payline.

Only the highest paying winning combination across a payline is paid.

The least amount a player can place as a bet in the game is 0.25.

The highest amount a player can place as a bet is 125.

The paylines in the game are fixed.

This means that a player cannot adjust the number of active paylines in the game.

The paylines in this game only pay one-way.

The winning combination has to be formed from the leftmost reel to the rightmost reel.

A player has up to 25 paylines to win in Wolf Gold Slot on every spin. 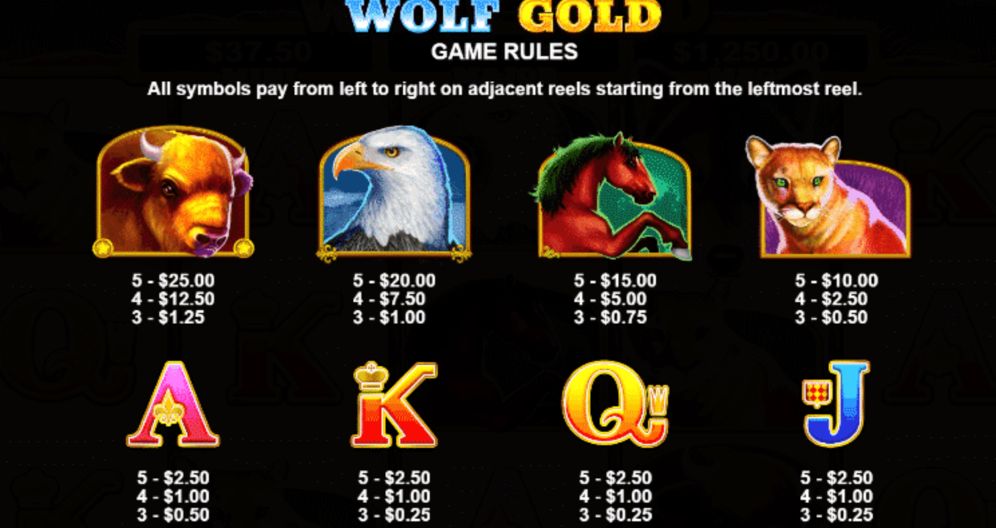 By 2017, Pragmatic Play has been nominated in several categories by various recognizing bodies in the industry.

What is the Wolf Gold Slots RTP?

This rate is a fair estimate of the returns that a player may gain from the game.

It predicts that for every 1 pound placed as a bet, the player may win back 96 pence every time they play Wolf Gold Slots.

Wolf Gold Slots is a game with a medium variance.

This variance rate promises that average wins are regularly awarded throughout the game.

The most notable bonus features of the game are the giant symbols and Money Respins.

Adding a progressive jackpot may help increase the popularity of the game.

At the end of the day, Wolf Gold Slots has the potential to be a strong leader in the pack.