Befriend these mighty and lucky oriental tigers to gain their trust and their blessing. Will you be lucky enough to land big wins with their help in January 2022?

Triple Tigers Slots is a 3-reel, 1 payline, online video slot game, developed by Pragmatic Play. This medium variance casino game has an RTP of 96.52% and an Oriental Tiger theme. Bonus features, such as Tiger Symbols, can help you win up to 500x your stake! Look out for Red 8 and Pawprint Symbols.

Find out how to bring home the jackpot from the three tigers in this Triple Tigers Slot Review.

From our research, we have created a list of the Best Triple Tigers Slots Sites in January 2022:

Triple Tigers Slots is a slot game with oriental themes and animal themes combined. The game tells tales about the Asian tigers and the luck that they bring.

The game is over a deep red background with lotus prints that are also believed to bring good luck accompanied by classic slot-gaming music and sound effects. The colour schemes in the game are in bright and shiny jewel tones of reds, greens, golds, and purples.

The different visual elements in the game complete the ambience. The visual and audio graphics also set the mood and the scene of the gameplay right away. The symbols that form winning combinations are all highlighted, and the transitions and animations in the game are seamless.

To start playing the Triple Tigers Slot, a player has to set up the game. Accessing the control panel by clicking on the + or – buttons on either side of the Spin button.

The Triple Tigers Slot is fully optimized to be accessible on different platforms. The game is playable on a desktop computer, on tablets, and on mobile phones. It is compatible with both Apple and Android devices. 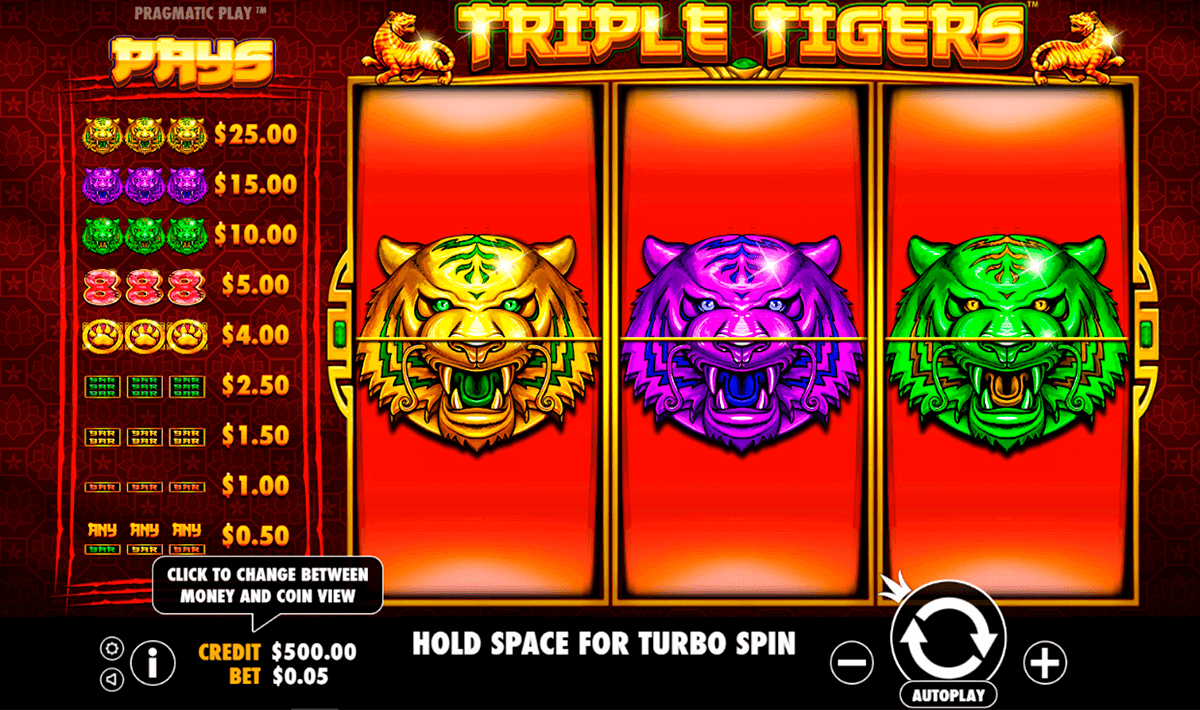 The average paying symbols in the game is the golden tiger pawprint and the red ‘8’ symbol.

The high paying symbols in the game are the tigers in different colours. This includes the jade green tiger and the purple tiger. The highest paying symbol in the game is the yellow tiger with green stripes.

Triple Tigers Slots gives does not have a bonus free spin round. 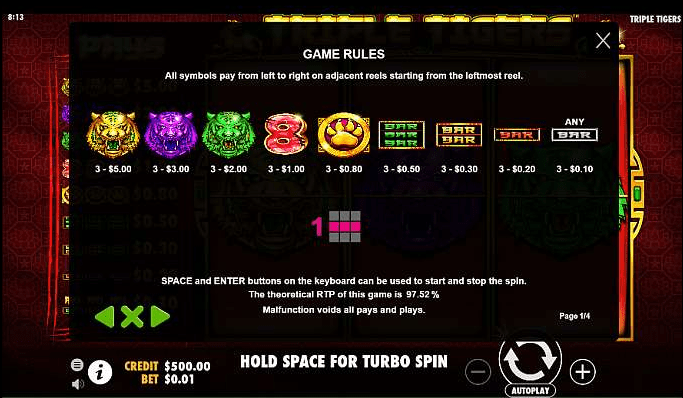 A player has one payline way to win in Triple Tigers Slot on every spin.

Pragmatic Play is an award-winning gaming development company, having been shortlisted for major awards in consecutive years. Pragmatic Play is also licensed to provide gaming solutions to different casinos all around the globe.

What is the Triple Tigers Slots RTP?

The RTP of Triple Tigers Slots is 96%.

This rate estimates the return that a player may expect to gain from the game. It predicts that for every 100 pounds placed as a bet, the player may win back 96 pounds every time they play Triple Tigers Slots.

What is the Triple Tigers Slot Variance?

Triple Tigers Slot is a game with a medium variance. This variance range promises that average wins are regularly awarded throughout the game. Playing the game longer means having more chances to win bigger prizes.

Triple Tigers Slots is a fun and easy game to play. The simple gameplay is perfect for players who prefer the classic slot experience. Including more interactive bonus features, a free spin round, and a progressive jackpot may increase interest in the game inJanuary 2022.