Listen in during the quiet and cold winter night for the jingling of the bells on Santa’s sleigh. Have you been good enough to land on Santa’s nice list for January 2022?

Santa Slots is a 5-reel, 20 payline, online video slot game, powered by Pragmatic Play. The high variance casino game has an RTP of 95.92% and a Christmas theme. Bonus features, like Santa Claus Wilds, Christmas Tree Scatters and the Santa Bonus, can help you win up to 250x your stake in real cash!

Find out how to gain the best of Christmas miracles with a wild symbol, a scatter symbol, a bonus symbol, bonus features, bonus games, and a free spins round in this Santa Slot Review.

From our research, we have created a list of the Best Santa Slots Sites in January 2022:

Santa Slots is a holiday-themed slot game. It tells the story of one of the many Christmases that keeps Santa busy.

Santa Slot is a video-based slot-type game. The game has five reels and up to 3 lines for each of the reels. Pragmatic Play released Santas Slot on the 1st of December, 2017.

The game is in a snowy forest evening with snow-laden trees accompanied by a jolly Christmas tune with tinkling bells and happy jingles. The colour schemes in the game are in bright, festive shades with deep blues, rich reds, and touches of gold.

The transitions and animations in the game are seamless. The symbols that form winning combinations are all highlighted. The different visual elements in the game complete the ambience and set the mood and the scene of the gameplay.

The game has some impressive storytelling. The visual and audio graphics of the game give the player a warm, fuzzy feeling that only comes with Christmas.

How to Play Santa Slots Online

To start playing the Santa Slots, a player has to set up the game. Access the control panel by clicking on the + and – buttons on either side of the spin button. 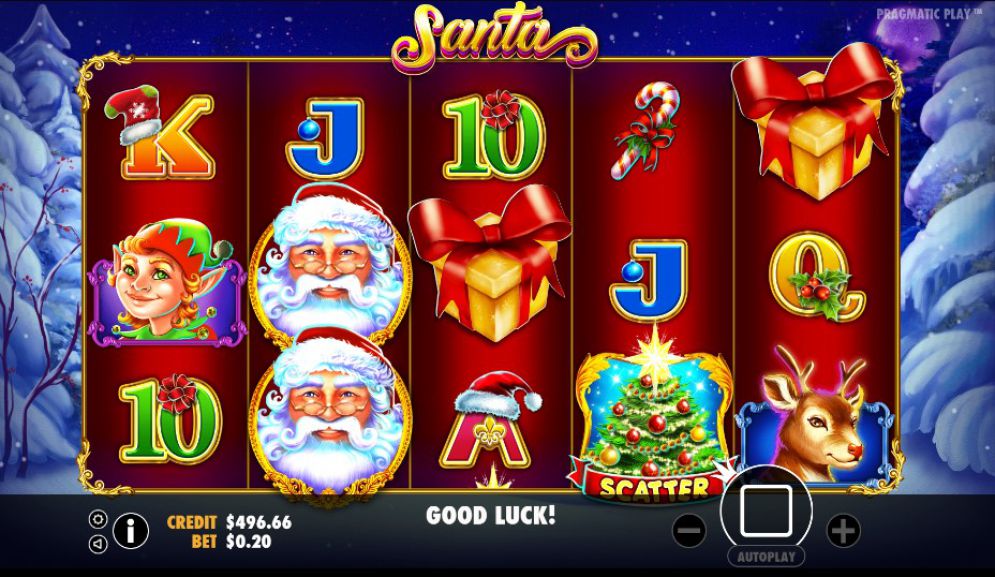 The high paying symbols in the game are various icons related to Christmas. This includes the Candy cane and a pair of gold bells with a red bow and sprigs of holly. This also includes a reindeer and an elf.

All the symbols are the same for both the base game and the free spins round.

There are 4 Jackpots in the Bonus Game.

Landing 3 scatter symbols on the reels in a single spin triggers the free spins round.

To win at Santa Slots, a player has to line up at least three matching symbols across an active payline. Only the highest paying winning combination across a payline is paid. 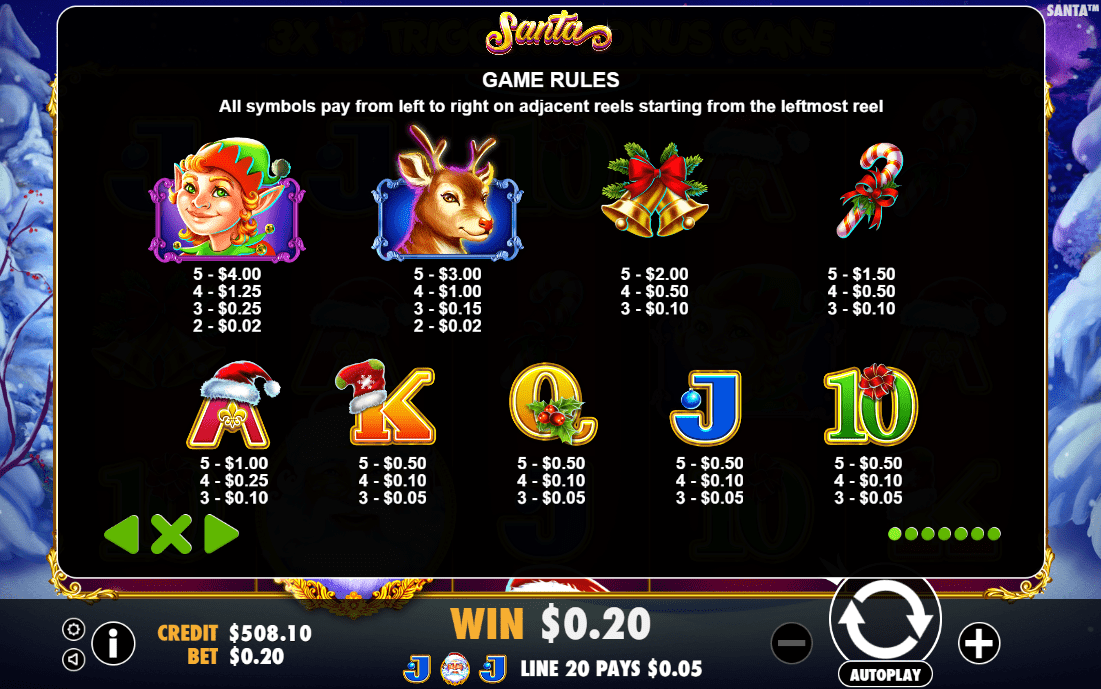 A player has up to 20 ways to win in Santa Slots per spin during the base game and the free spins round. A player can win up to 200000x the current bet.

When Pragmatic Play was founded, it has built up a reputation of being one of the fastest growing online slots game providers. Pragmatic Play won the Software Rising Star category at the EGR B2B Awards.

What is the Santa Slots RTP?

This rate estimates the wins that the game awards to the player. It predicts that for every 1 pound placed as a bet, the player may win back at least 95 pence whenever they play Santa Slot.

What is the Santa Slots Variance?

Santa Slots is a game with a high variance rate.

This variance rate promises that high paying wins are occasionally awarded throughout the game. Playing the game longer means having more chances to land big wins.

Santa Slots is a festive game that brings cheer to the player with all its elements. The visual design and the soundtrack immediately transport the player to a happy Christmas scene. The bonus game and the free spins round help the player win bigger prizes in January 2022.

Adding a progressive jackpot to the game may increase the games appeal to a wider audience. All things considered, Santa Slot is a fun game filled with Christmas miracles.