In the King of Atlantis slot, you’ll meet the ruler of all the seas and oceans and have a chance to win the most money!

King of Atlantis Slots is a 5-reel, 40 payline, online video slot game, with a Greek Mythology theme. Developed by IGT, the high variance casino game has an RTP of 96.14%. Bonus features, such as Gigantic Poseidon Wilds, the Trident Bonus and free spins, could help you win up to a huge £25,000,000!

This IGT slot game will transport you to Poseidon’s realm and allow you to discover Atlantis’ lost city. You can also get awesome bonuses like massive wilds and free spins while you’re at it.

Find out more about this high variance reels 5 paylines 40 video slot game in this King of Atlantis Slot Review!

From our research, we have created a list of the King of Atlantis Slot in September 2021:

About King of Atlantis Slots Game

When you first open the game, you’ll notice blue shades that reinforce the feeling of being underwater, in the ruler’s realm of all the seas.

King of Atlantis is a 5 reels and 40 paylines online casino slot game with a Greek mythology and under-the-sea theme.

Poseidon, god of the sea, is portrayed as an older man with a white beard, golden crown, and trident in this game.

You’ll even see his lovely daughter, a lovely red-haired mermaid. Harps, the king’s crown, bells, dolphins, and ancient artefacts are among the other symbols.

The visual graphics and animations of the King of Atlantis slots will undoubtedly appeal to players, as they are cartoon-styled and beautifully set underwater.

All devices, including iPhones, iPads, Android smartphones, laptops, and desktop PCs, can play the King of Atlantis slot.

How to Play King of Atlantis Slot Online

Before you start the King of Atlantis slot game, here are some key steps you should try to do first:

Begin by setting your bet as well as how many wilds you want appearing on the reels. You can choose between 20, 40, or 60. Players must also set the stake or deposit before spinning. Once you’ve decided all these, you can start spinning the slots reel using the SPIN button.

Gigantic Wild symbols and bonus scatters are featured in the King of Atlantis slot game.

A bonus scatter is also used in the game, which can be combined with the wild to maximize your payouts.

The King of Atlantis slot has a Poseidon Free Spins Bonus feature that you can play when you get the bonus scatter on the first reel and the gigantic wild on either the second or fourth reels simultaneously on the same spin.

You’ll get 8 free spins if you get these icons. The wild reels would then be set in place, giving you the chance to land four fully wild reels. 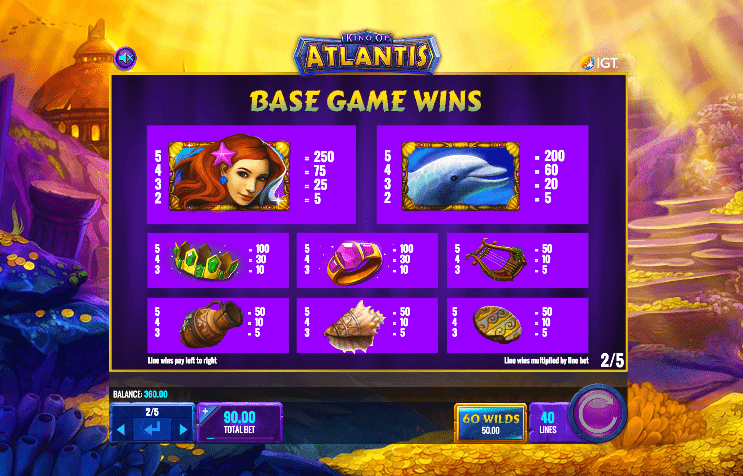 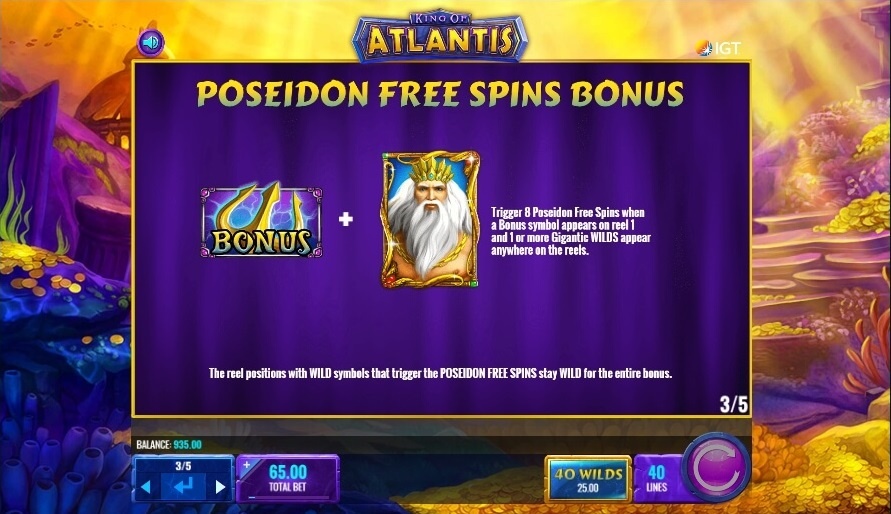 As previously said, you have control over how many wilds appear on the reels. The stakes will then be determined by the number of wilds you choose:

Meanwhile, you’ll use all of the game’s 40 paylines. High rollers will put up as many as 32,500 coins on the table.

On a single spin, you will earn a maximum of 25 million credits. You will look up the value of each symbol combination in the paytable.

The King of Atlantis slot was produced and powered by IGT Software.

IGT offers free slot machines that do not need any download or registration. Free spins and bonus rounds are included in the majority of their games. These games can be played on mobile devices as well.

What is the King of Atlantis Slots RTP?

IGT lets you play King of Atlantis slots that has an RTP of 96.14%.

The slot King of Atlantis has a return to player rate means that the game can offer up to £96.14 payout for every theoretical wager worth £100.

IGT’s King of Atlantis slot has a high variance level.

This slot volatility indicates that the game is extremely volatile, implying that you can win large sums of money in a short period of time.

We looked at the King of Atlantis slot online casinos and found it to be very appealing to slot players who are interested in the secret underwater world, or Greek mythology theme.

It is suggested that you do play responsibly no matter how enjoyable this online slots may be. Despite the fact that this online casino game does not have a progressive jackpot, the massive wilds and free spins will still provide a lot of money.

To sum up this King of Atlantis Slots Review, the game is enjoyable due to its beautiful setting, unique gameplay style, a helpful bonus symbol, and exciting, gigantic wilds system.