Travel through the stars across different universes, exploring the final frontier onboard the USS Enterprise. Settle disputes and keep the peace among the members of the United Federation of Planets with the leadership of Captain Kirk and Lieutenant Commander Spock. Will you find a planet filled with big wins aboard the Enterprise in January 2022?

Star Trek Slots is a 5-reel, 30 payline, online video slot game, powered by IGT. The medium variance casino game has an RTP of 95.2% and a Star Trek Movie theme. Bonus features, like USS Enterprise Warp Drive Scatters and the Spock Goes Wild symbol Bonus, could help you win up to a maximum of 1,000 coins!

From our research, we have created a list of the Star Trek sites in January 2022:

The Star Trek online Slot machine is an online video game developed and released by IGT. This video slot game has five spinning reels, with each reel holding up to three bonus symbol lines. Star Trek Slot machine players have up to 30 ways to win whenever they play the game.

This Slot has a futuristic slot game design. The reels are framed by silver and metallic borders that make the player feel like they are inside the main control room of the Enterprise with the whole crew, looking out into the galaxy. The background of the reels is a view of the jet black void of the galaxy, dotted here and there with twinkling stars in the distance.

There are many bonuses offered in this slot game. There are four free spins bonus features related to Star Trek characters. The biggest jackpot you can find with the crew on an unexplored planet is 1,000.

Hop into the Enterprise and find wins in this game enough to live long and prosper.

When you play this Slot, there are several things you can adjust to fit your preference and your budget. These are the number of coins placed as bet and then number of active paylines. Follow the steps here to go safely home to Earth.

The Star Trek Slot machine is compatible with devices with bigger screens such as desktop computers and laptops. Players can also take the Enterprise with them anywhere they go. This Slot is playable on mobile devices like smartphones and tablets using both Android and Apple operating systems.

The Enterprise holds many special features and bonus win for it players throughout the entire ship. Find out how to win the biggest jackpots using these features.

The different symobls in the game are various iconic characters of the latest iteration of the series. The high paying symbols in the game are the pictures of the actors who played the characters in the recent Star Trek installment. These are Chris Pine as Kirk, Zachary Quinto as Spock, Zoe Saldana as Uhura, and Simon Peg as Scotty.

The low paying symbols in the game are high icons from traditional playing cards. This includes 10, J, and Q. It also includes the K and the A.

The Slot machine has a set of bonus free spins for its players to win more spins. These spins help the players win more jackpots from the game for free. 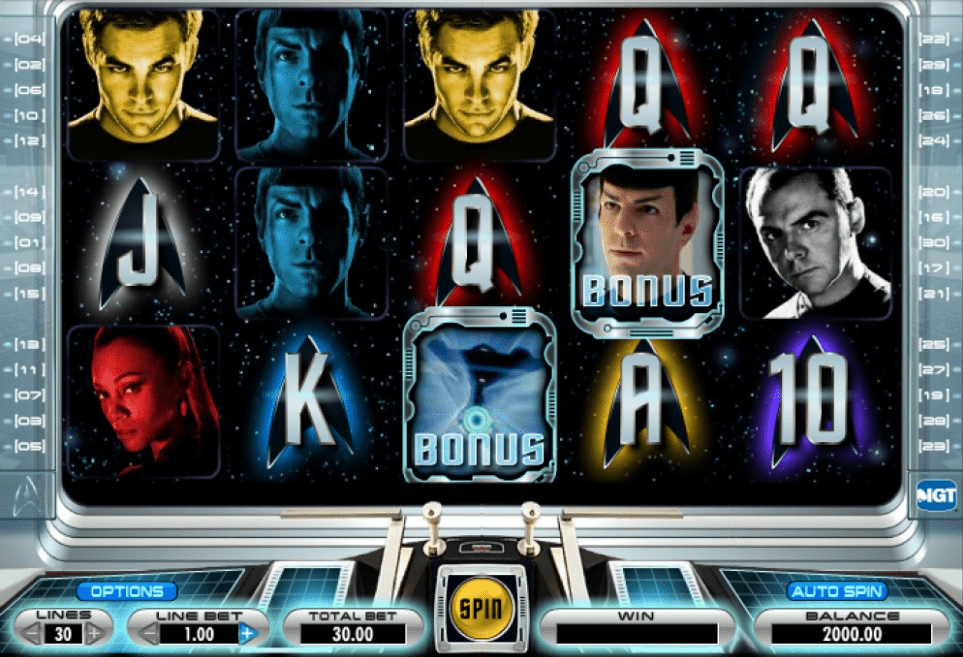 When the Star Trek Bonus Free Spins activates, the players can receive up to 250 free spins. Depending on the symbol that lands on the third reel, the player can win one out of four bonus free spins round.

The Kirk Win Spins Bonus feature triggers when the Kirk symbol lands on the third reel. In this feature, the player receives 3 to 6 free spins. Each of the Kirk Win Bonus spins continuously turns the reels until the player lands a winning combination. This feature ends when all the free spins have been used.

When the Spock figure lands on the third reel with the other Star Trek bonus symbols, the Spock Goes Wild activates. In this feature, the player receives 10 to 15 free spins and 2x multiplier that applies to all wins in this feature.

In the Spock Goes Wild Feature, all the Kirk symbols are worth twice its usual pay.

If the player manages to land the Uhura symbol on the third reel, the Uhura Super Scatter starts. This feature awards the player with 6 to 12 free spins. The player also receives an extra Uhura scatter pay. The Uhura Scatter symbols form winning combinations by landing anywhere on the reels.

Players can receive up to 8 Uhura scatter symbols and 8 wild symbols throughout the entire feature.

The multipliers are active on the players’ first five spins in the feature. For the rest of the spins, the players will receive a multiplier that ranges from 4x to 10x.

This online casinos game gives its player up to 30 ways to win whenever they play the game. A player has to land at least three matching symbols across an active payline in a single spin to receive a pay. All the winning combinations in Star Trek Slot have to be formed from the leftmost reel to the rightmost reel to be counted as a win.

The biggest jackpot a player can expect from the Star Trek game is 1000.

Star Trek Slot is a video slot game that was made possible by IGT Software.

IGT is one of the top slot game providers for online casino players and in-land casino players through various channels and segments. The company pioneered the introduction of social gaming integrated with the slot game. IGT games are creative and innovative, developed using the latest technology available in the market.

What is Star Trek Slot’s RTP?

The Star Trek slot is a non-progressive slot game that has an RTP of 95.2%.

The return rate is the current return rate average in the market. The rate helps players understand that a bet of 1 pound will render at least 95 cents in return.

What is the Star Trek Slot Volatility

The Star Trek slot machine has a medium to high variance.

Where can I play Star Trek slots for real money?

You can play for real money on the Star Trek slots when you go through the IGT online casino.

When you play on IGT online casino, you will be able to play for real money and win cash bonuses!

Just place your bet and spin… the real money can be yours in an instant!

Can I play Star Trek slots for free?

You will be able to play on the online casinos for free when you go through the demo mode!

When you go through the demo mode, you can experience interactive features, such as free slots, bonus rounds, bonus symbol and wild symbol fun, no deposit bonus, and so much more!

Unfortunately, you will not be able to play for real money as this will not count in the no deposit bonus.

The Star Trek Slot machine has a simple gameplay that is easy to understand for both new and old slot game players. The Slot has all the basic features that most slot games in the current market have. Its most notable features so far are the different free spins bonuses, like the Kirk Win Spins Bonus, the Spock Goes Wild Bonus Feature, the Uhura Super Scatter Feature, and the Scotty Multiplier Boost Feature.