Pick your way across the lava-covered rocks to find the tiger lurking behind the vegetation. Will you find the hidden treasures with the help of the Sumatran tiger in January 2022?

Sumatran Storm Slots is a 5-reel, 720 payline, online video slot game, powered by IGT. The medium variance casino game has an RTP of 96.6% and a Jungle Animal theme. Bonus features, like Golden Tiger Wilds, Green Gem Scatters and the Tiger Eye Symbol, could help you win up to £500,000 cash when you play for real money!

From our research, we have created a list of the Sumatran Storm Slot sites in January 2022:

The Sumatran Storm Slot machine is an online slot game that is set in the Sumatran region. The game tells the story of the different animals that live in this region of the world. Sumatra is one of the many islands of Indonesia that is found closest to the Asian mainland.

This video slot game comes with five reels and varying symbol lines. The first and fifth reels of the game have three rows. The second and fourth reels each have four rows while the middle third reel has five rows.

The Sumatran Storm Slot machine was designed and released by IGT on the 11th day of October in 2013. The slot game has a fiery background. Hot flowing cover rocks under a fire-red sky. The colours in the Sumatran Slot game are in deep and warm red tones.

Before you can play the Sumatran Storm Slot machine, there are some things that the player as prepare. Follow the recommended steps in this review to help you play more efficiently.

The Sumatran Storm Slot machine can be played on devices with different screen sizes. Players who like to play on the go can play the Sumatran Storm game on smartphones and tablets that use both Android and Apple operating devices.

The Sumatran Storm game has special features and bonus aspects that can help players win more from the game. Read through these features in this review to find out how to maximize these features and gain more wins. One amazing feature players love is that you can play for real money!

In the Slot game, the active symbols based off of several aspects that may be found in the Sumatran culture. 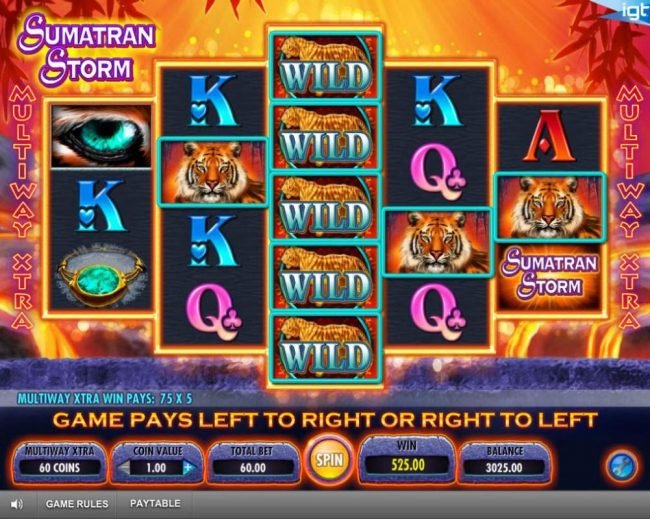 The low paying symbols in the game are the high symbols from traditional playing cards. This includes J and the Q. It also includes the K and the A.

Here are the pays of the different Sumatran Slot symbols.

The only symbols the wild Sumatran tiger cannot stand for are the scatter symbols and the bonus symbols.

Players of the Sumatran Storm Slot machine can play the game with more convenience. This option helps players spin the reels continuously.

The Slot game has a bonus free spins round where players can win more prizes for free and play for real money.

The bonus symbol is the blue tiger eye. Landing this symbol on five consecutive reels triggers the free spins bonus round with five bonus spins.

If the player manages to land more than one bonus round granting combination, the sum of all of the awarded bonus spins is automatically awarded to the player. Players can win up to 60 spins for free.

In the free spins round, if the player manages to land the red tiger eye symbol on all five consecutive reels, the player receives 5 more spins.

The Sumatran Strom Slot gives its players 720 ways to win whenever they play the game. This is because of the Multiway Xtra feature. These paylines are fixed and cannot be adjusted. All winning combinations have to form from starting from the leftmost reel to the rightmost reel to be awarded. You can now play for real money! 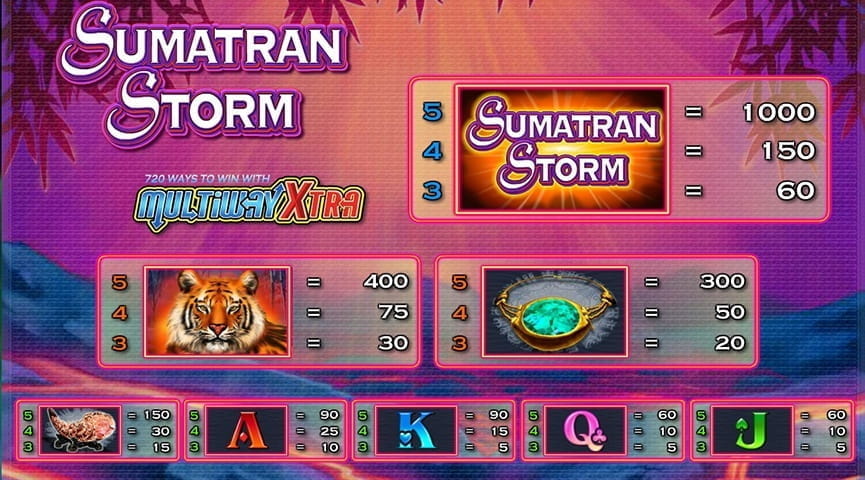 To receive a win, players have to land at least three matching symbols across a payline in one spin.

The smallest bet needed for a player to start in the game is 0.01. The most a player can place as bet in the Sumatran Storm Slot is 500.

IGT is one of the biggest producers and developers of slot games in the market. This company has partnered up with many franchises and major brands to create slot games with these themes.

What is the Sumatran Storm Slot RTP?

This return rate is the average rage for most slot games in the market today. It helps Sumatran Storm players understand the wins they can expect from the game. For every pound placed as a bet in the game, players can expect to win back 95 cents.

What is the Sumatran Storm Slot Variance?

The medium variance range helps players expect average wins to be consistently awarded throughout the game. Playing the Slot game longer means having more chances to win more jackpots throughout the game. You can win cash bonuses now when you play for real money jackpots!

Where can I play Sumatran Storm Slots for real money?

You can play for real money on the Sumatran Storm slot machine when you play through this or any other IGT slots online casino.

If you would like to play for real money, this real money online casino can help you win cash bonuses!

Just place your bet and spin… win and play for real money today!

Can I play Sumatran Storm for free?

Although you may have heard that you can play for real money on this slot, you can also play for free when you go through the demo game mode!

When you play in the demo mode, you can experience interactive features, such as free slots, fun online slots, bonus rounds on online casinos, no deposit bonus, and so much more!

Unfortunately, you will not be able to play for real money in the demo mode as it is not included in the no deposit bonus!

The Sumatran Storm is an online slot game with a unique Siberian storm theme. The gameplay is easy to learn and perfect for new slot game players. It has all the usual features to be expected from slot games. The most notable features in the Sumatran Slot are the scatter symbol, the free spins round, and the spins retrigger.

If the developers updated the game to include a progressive jackpot, it may become more popular with more players. All in all, the Slot game is an Asian adventure worth taking.