Bigger is always better. The girls are back and this time, they’re not pulling any stops. They’re going big because they’re definitely not going home. The new mission is to capture the evil Saskia and gain all the loot she’s stolen. The girls are headed for the icy mountains to search for her.

So, join them and see if you can spot some wins in the snow.

Girls with Guns Frozen Dawn Slots is a 5-reel video slot game with 243 paylines and a spy theme. Powered by Microgaming, this medium variance casino game has an RTP value of 96%. The bonus features include Frozen Wilds, Magnetic Wilds, Satellite Scatters, Free Spins, and Shootout Bonus.

Cool things down with the girls and their guns when you play their video slot game and find out how you can shoot for some wins when you read this Girls With Guns Frozen Dawn Slot Review! Who knows, you might even stumble into the unexpected jackpot prize.

So you know how many sites offer Girls with Guns Frozen Dawn slots in October 2022?

From our research, we have created a list of the best Girls with Guns Frozen Dawn slot sites:

Ready for another spy mission? Then grab your guns and put on your gear. Your next assignment is coming up and the girls are waiting.

The original Girls with Guns showcased six leading female characters. They were dressed in army attire, armed with serious ammo, in a jungle setting. Following defeating Hector in the original game, the new villain to beat in Frozen Dawn is Saskia, before she plots to take over the world.

Now, the girls are on a new mission, just as deadly and yet just as exciting. The aesthetics have changed to suit the new theme, depicting a harsh rocky, snowy mountain backdrop, with a few sparse trees dusted with snow.

Along with some frozen wilds, magnetic wilds, scatters, and free spins, the girls have received an outfit overhaul, as the icy weather has called for thick fur coats, hats, and earmuffs instead of combat boots and camo. They act as the game’s symbols along with the usual suspects such as the logo and card symbols.

If you aren’t afraid of the cold, then venture into the mountains with these femme fatales as they seek to defeat the conniving Saskia and her henchwomen, and claim her treasure once she’s defeated. Adventure is out there! So take the leap and take this slot out for a spin.

How to Play Girls with Guns Frozen Dawn Slot Online

Every good spy must remember these tips and tricks before going on missions:

When playing this kind of slot game, it’s best to set the amount to bet, the coin value, and the number of lines to play first. This can all be toggled on the bottom part of the screen. Although, if you can’t decide, you can always click on the “Max Bet” button to set the maximum allowed amount per round. Once you’re happy with your amounts, you can either click the Spin button to play one spin, or the Autospin button for uninterrupted gameplay.

Watch your wins grow from nothing into something when you play the game on any mobile (Apple or Android), tablet, or PC/ Desktop device. 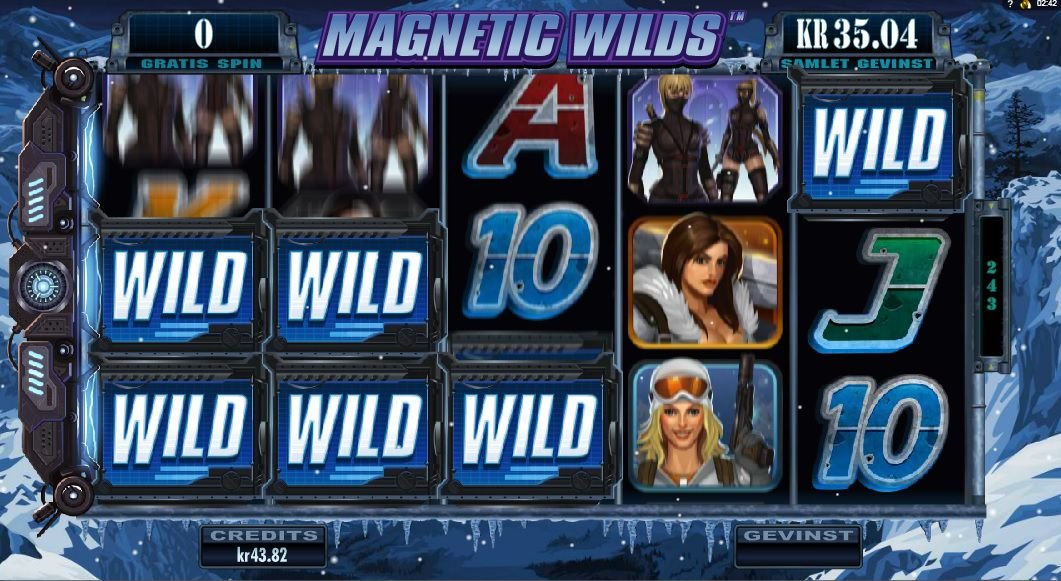 Magnetic Wilds. In opposition to Frozen Wilds, if you gain some Magnetic Wilds on the fifth reel, during the next spin, the magnetic wilds shall shift over to the first reel and secure its place for the entire round.

Scatters and Free Spins. Players will need a minimum of 3 scatter symbols to appear on any of the reels to claim free spins. The free spins feature can be retriggered so players don’t have to worry about settling for the amount of free spins.

Shootouts. This feature activates when you access a spin that doesn’t constitute a win. It is also a “Pick Me” game of sorts since during this feature, one of the girls with guns is at the ready to destroy any one of the three symbols outlined on the reels; you just need to choose which one you want her to shoot. Once the icon is destroyed, you shall win a reward.

Also, during your free spins, you can expect extras to include and additional wild symbol. There is more than one wild symbol to look out for and that includes the frozen and magnetic icons and a multiplier for your stake which varies from 2x up to 100x your wager

Apart from the wilds, scatters, and free spins, this game has a handful of payouts just waiting to be captured. As with the original Girls with Guns game, there are also five reels and 243 pay line combinations and ways for you to win on the Frozen Dawn version. You can bet from 1 to 15 coins per payline and the coin value ranges from 0.01 to 0.20.

If you’re interested in winning the 9,000 jackpot, you’ll need to bet up to 30 coins per spin. 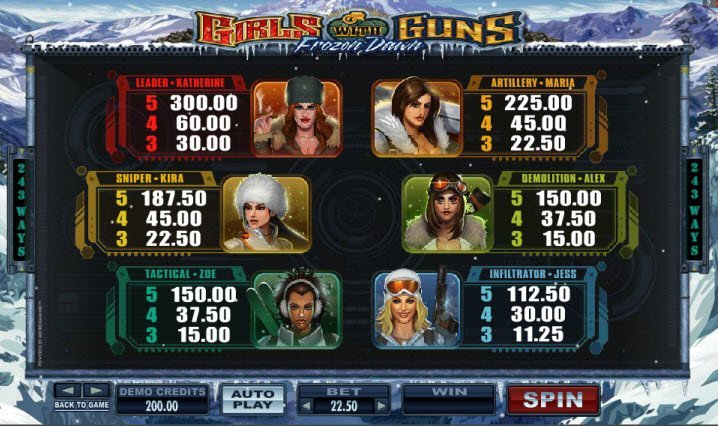 Now, apart from the scatter and frozen wilds, and magnetic wilds, players can gain some payouts from the high and low-paying symbols. The higher ones can get amounts varying from 1.5x to 60x multipliers for landing 3 to 5 of a kind of the reels. These symbols consist of the girls, Saskia, the mansion, and Saskia’s henchwomen.

The lower-paying symbols, on the other hand, consist of big, bold card symbols such as the A, K, Q, J, and 10. These can reward players with a minimum of 0.3x multipliers for landing 3 of a kind on the reels, and a maximum of 11.25x when 5 of a kind land.

Girls with Guns Frozen Dawn Slot was made possible by Microgaming.

Micrograming is a software provider who is known for developing the world’s first online casino software back in 1994 as well as the first mobile casino in 2004. Since then, they’ve been responsible for a multitude of exciting games including Avalon, Thunderstruck and much more! They also launch a new game monthly which are now available on both mobile and desktop platforms.

What is Girls with Guns Frozen Dawn Slot RTP?

Girls with Guns Frozen Dawn Slot is a non-progressive slot game that has an RTP payout percentage of 96%.

This game has a great Return to Player rate. That means a player’s chances of winning are pretty high since players can expect to get a return average of £96 per £100 bet. The payouts come frequently enough so players will have a good amount of winnings by the end of the game.

This is a medium variance game. With this kind of variance level, players can expect to land some pretty decent amounts in a semi-frequent manner.

This is one action packed slot game that includes some powerful femme fatales and some wicked prizes. As with the original version of Girls with Guns, players can expect an exciting, fun, and immersive gaming experience. Everything from the exploding firearms whenever wins are made to the theme’s depiction of spy actions and missions, this game will have you on the edge of your seat for hours at a time.

This game is also filled with helpful bonus features such as the wilds, scatters, and free spins which just increases a player’s interest to keep spinning this game. The graphics and animations are pretty on point too and they make it seem like players are in the missions themselves. It is one video slot that captures spy missions perfectly, and it doesn’t hurt that there are a handful of helpful bonuses, several free spins, and even a jackpot to benefit from. So, if you’re up for some snooping, spying, and looting, then take this reel out for a spin!

Here is a list of the most popular Microgaming games online players love to play in October 2022:

I’m a huge fan of online slots and love to write about all the latest games and new releases. As a Digital Marketing Specialist, I’ve been blogging for a number of years and have an interest in online games. My articles have been shown on a range of different sites in the gambling industry.