Do not let the tides get you down when you play Deep Sea Dosh Slots. Shout out a loud “Shell, yeah!” with every big prize you win in the game.

Deep Sea Dosh Slots is a 3-reel video slot game with an ocean theme and 1 payline. Powered by Microgaming, this high variance casino game has an RTP of 96.5%. To gain that, you can use the mix of classic and themed symbols like cherries, lemons, oranges, crabs, fish, pearls, and mermaids.

Get your sand dollars ready and reel in a big catch with this slot machine.

From our research, we have created a list of the Best Deep Sea Dosh Slot Sites:

Deep Sea Dosh slot is one of the many online games developed by Microgaming. It is a video-based slot game released in 2009.

The game has three reels and it works around a single payline. This is a marine-themed, classic casino slot.

If you’re a fan of ocean-themed games then you’ll want to check out one of our favourite sea fantasy slot games, Mermaid Millions, read our full review as we break down the software, gameplay and bonuses.

Under the Sea Themed Slot Design

Deep Sea Dosh Slots is set in the depths of the deep sea.

The reels of the game are set against the ocean floor with a scheming shark peeking in from the side. The reels have a mermaid and a merman guarding it on either side. It is placed in the middle of the screen. 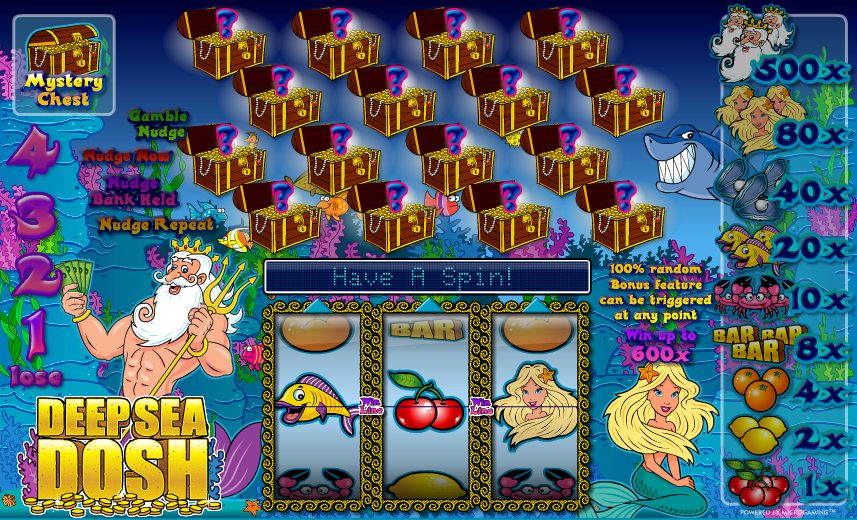 The paytable and value symbols are found at the right side of the reels. The multiplier is found in the left side.

There are also treasure chest symbols that hold hidden treasure at the upper half of the screen.

Like almost all the games developed by Microgaming, this one has symbols that are in line with its theme. It successfully combined traditional slot-game fruit symbols with marine-themed symbols.

Deep Sea Dosh Slot is a three-reel game that is perfect for the beginner slot gamer. It has a single payline that runs right across the middle of the reels

After setting the coin size, set the bet on the payline. The payline only holds one coin per spin.

Finally, let the reels start rolling by clicking on the green clam button. Sit back and watch the rewards come in waves.

The single payline of the Deep Sea Dosh slot makes it a good introductory game for newbie gamers.

To win in this slot game, a player needs to line up three symbols in a row.

The symbols are cute combinations of fruit and marine symbols with different pay values. There are nine symbols in Deep Sea Dosh slots.

The marine-related symbols have a higher pay rate. The symbols in the game are:

One traditional slot symbol in the game is the bar symbol.

These symbols have different pay values that affect the prizes that a gamer can win. Landing a combination of a symbol in all three reels can win a gamer a big prize depending on their bet.

The highest paying symbols in the game are the merman and the mermaid. The mermaid pays a multiplier of 80. The merman pays the bet times 500 if a gamer manages to land it on all three reels.

There are no free spins available within the game but be sure to look out for free spin offers from some of the top slot websites.

Deep Sea Dosh Slots does not have a wild symbol and a scatter symbol. However, the game has other features that make up for this.

The game has the nudge and the hold as the additional features. Each of these two can be strategically used during the game.

There is a neon sign found right above the reels. The phrases that flash on this sign can help gamer increase their winnings. These messages are the Shifta and the Let’em Spin.

When the bonus game is triggered, the reels slowly fill with water. As the water pours in, a set of chests containing random multipliers open. This sends an offer to the gamer.

If the gamer accepts the offer, the bonus game is over. If a gamer rejects the offer, more water fills the reels and another set of chests open with another offer.

When there are no more chests left to open, the last offer will be applied.

What is the Deep Sea Dosh Software?

If you’ve played at the top slot sites before you are probably familiar with this provider. They run many of the most popular games so you can be sure it’s a top-quality game.

This is a fairly good Return to Player value which is similar to many games from the Microgaming software platform. It’s definitely worth giving this game a go for the possible returns.

So it’s great for players who are chasing those big wins. The game may not pay out as often as some others, but when it does you can generally get a bigger prize.

Dive Into the Ocean

The Deep Sea Dosh is a fun and interactive game for both newbies and veteran gamers. The simple payline and additional features deliver on the promise of hours enjoyment while winning big prizes.

Dive deep into the sea of slot games with this popular slot machine.

You can find plenty of welcome promotions on Microgaming Slots.

Now you have read our review, check out more from Microgaming below to see other offers in January 2022.