Enjoy being masqueraded by this Secret Admirer Slot game and win some generous real money winnings.

This game is themed around a secret admirer and that’s why you’ll get your hands on roses, chocolates and lavish gifts.

Secret Admirer Slots is a romantic themed, 5-reel, 9 payline, online video slot game, powered by Microgaming. This medium variance casino game has an RTP of 96.08%. Bonus features that can help to win up to a big 2500 coin jackpot include diamond ring scatters, masquerade wilds and admirer hearts.

But the presents that we’re really after includes the free spins, bonus features, wild symbols and more. Read on for our full breakdown in this Secret Admirer Slot Review.

Check out the best slot sites and online casino options that host this game in October 2021.

From our research, we have created a list of the Best Secret Admirer Slot Sites in October 2021:

The Secret Admirer is a romantic themed online video slot game. The well-reputed Microgaming developed this slot. The slot provides five reels and nine paylines for the players to earn rewards.

How to play Secret Admirer Slots

Learn to play the Secret Admirer slot by following these instructions,

Read more below, on our review of their bonus features including the wild symbol, free spins feature and more.

The game offers free spin features to its players. The free spin is triggered when two diamond ring scatter symbols are placed adjacently. When this happens, players get three free spins and 2x the output winning.

The output winning in increased by 6x, 20, and 50x when three, four, and five diamond ring scatter symbols are placed adjacently on the reel. 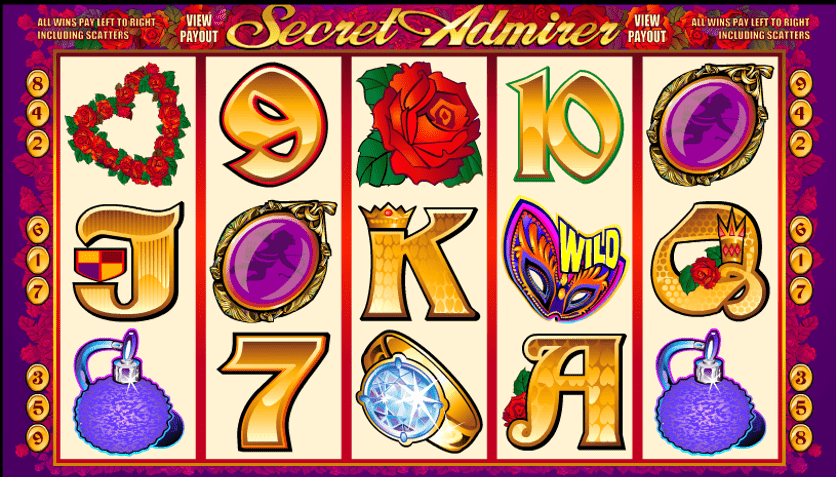 The game also has a wild symbol. It can be used to replace it with any symbol if it lands on the reel. The only exception is the scatter symbol.

The Secret Admirer slot has 9 different combinations to earn rewards. The maximum reward is achieved when you land five wild symbols in the payline. It gets you 5000x your initial stake.

As you can see, playing with a high initial stake gets you high rewards. You can play a maximum of 10 coins per spin to reap maximum rewards.

The Secret Admirer slot game is available to play on your smartphones and tablets.

Microgaming adapted the game to be playable on all devices and platforms. With the same experience as on your desktop, play the slot on your mobile.

This slot game is available with the full features on all mobile devices, enjoy on both iOS and Android.

Naturally, there are roses all over the reels. The reel has card symbols like queen, king, joker, and ace. Other symbols include perfume, red roses, brooch, a diamond ring, and a wild symbol.

The audio is a good complement to the visuals.

Microgaming developed the Secret Admirer with a valentine theme. The slot does manage to give the romantic feeling to the players.

The slot game has excellent free spin features and a gamble feature. The slot also gives a good return winning amount to the players.

The Secret Admirer will be a good slot game for the players.

Secret Admirer is a video slot that’s been created and is powered by Microgaming Software.

Microgaming are an esteemed software provider that are behind thousands of different slot games. This one has been carefully constructed and runs smoothly from start to finish. Make the most of the fast performance and uninterrupted gameplay.

The game has a verified RTP of 96.08%.  The Secret Admirer gives a good return to all the slot players and far exceeds the average.

Secret Admirer has a slot volatility of medium variance.

That means that you get frequent payouts and still have the chance to enjoy big wins.

Now you have read our review, check out more from Microgaming below to see other offers in October 2021.

Secret Admirer slots is one of our favourite Microgaming slot games in October 2021.