Experiment with different materials fueled by electricity in a secret lab. Harness the wild power of electromagnetic attraction to give yourself big wins. Can you generate enough attraction in January 2022 to win over the jackpot?

Attraction Slots is a slots game by NetEnt offering a fascinating space theme that players love. You can make the most of this game’s free game features, or try your hand at winning real cash with an RTP of over 96%! The minimum bet at Attraction Slots is just 10p.

Find out how to attract more wild symbols, bonus features, and respins you play in this Attraction Slot Review.

From our research, we have created a list of the Best Attraction Slot Sites in January 2022:

Attraction Slot is a game with five reels and three rows and has ten active paylines. NetEnt released the Attraction Slot on the 21st of August 2014.

The highest jackpot a player can win in the game is 500 coins.

The game happens in an underground science laboratory.

The borders of the reels are in pink. Small blue dots represent the paylines on either side of the reel. At the beginning of a round, a magnet is attached to one of the four sides of the reels.

All the important information and necessary buttons to play the game are on the control panel. The panel is at the bottom of the screen. It has a set of green buttons with pink outlines.

The left side of the panel has the control buttons for the bet level, the bet level tracker, and the payable button. The right side of the panel has the coin value control buttons and the coin value counter. In the middle of the reels sits the Autoplay option, the Bet Max button, the round Spin button and a monitor for the wins.

Some of the symbols in the Attraction Slot game are gadgets, gizmos, and atoms. An exciting tune plays in the background during the game.

How to Play Attraction Slot Online

Before starting any round of experiments, there are several things a player has to prepare, which are the coin value and the bet levels.

The game has several special features that can help a player attract more wins. These are wilds, re-spins, and magnet features. 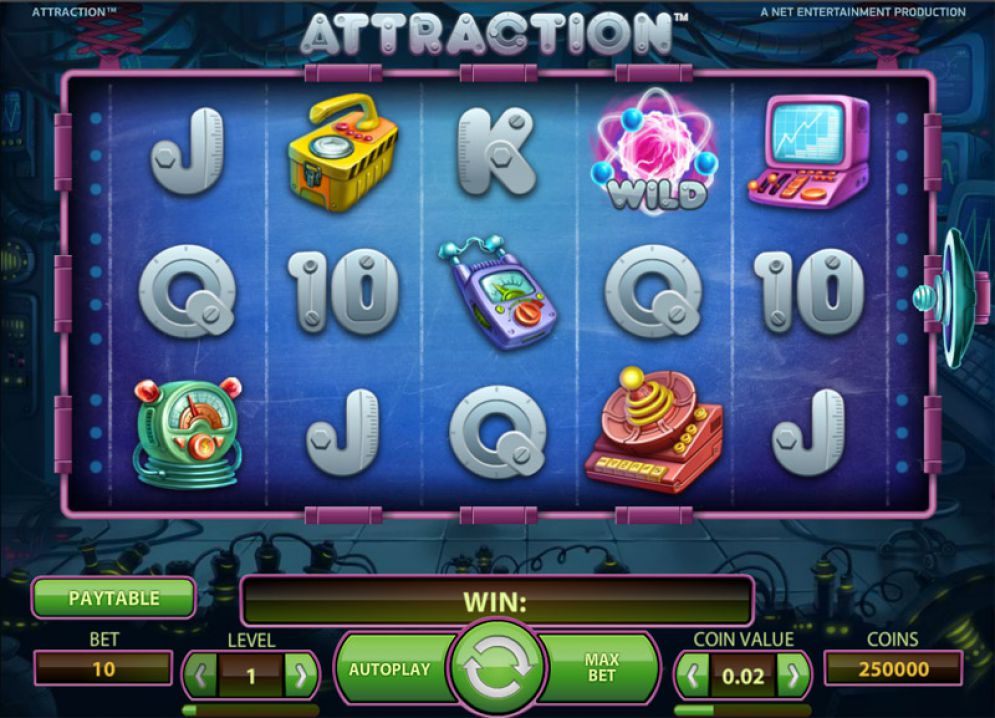 Attraction Slot gives its players a bonus spin round.

To win at Attraction Slot, a player has to line up at least three matching symbols across an active payline. Only the highest paying symbol combination on a payline is paid. A symbol combination is considered a win if it was formed from the leftmost reel to the rightmost reel. 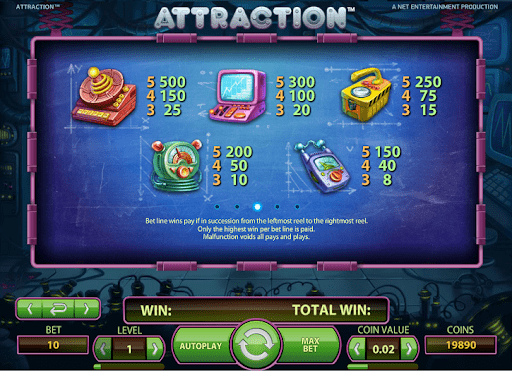 Attraction Slot was released and developed by the gaming company NetEnt. It is a video-based slot game. It can be readily played on any host website that carries it.

NetEnt has produced games based on famous movie franchises.

What is the Attraction Slot RTP?

Attraction Slot has an RTP rate of 96%. This is higher than the current average rate in the market.

What is the Attraction Slot Variance?

The theme of the Attraction Slot is appealing to many audiences. The graphic and animation execution is good. The stakes are fair and considerate of players with different budgets in January 2022.

Adding a progressive jackpot in the game can make it more appealing to a broader audience. All in all, this game is bound to attract many players.

More Info About this Game