Prepare your grappling hooks and secure your top hats in January 2022. Climb up the tower to help the captive princess escape when you reach for the top. Can you defeat the dragon guarding its treasure?

Steamtower Slots is a 5-reel, 15 payline, online video slot game, powered by NetEnt. The medium variance casino game has an RTP of 97.04% and a Steam Punk theme. Bonus features, including Grappling Hook Wilds and Steamtower Floor Multipliers, could help you win up to 2,000x your stake in real cash!

Read about how to gear up in old Victorian-era steampunk to battle your way up the tower when you play in this Steam Tower Slots review.

From our research, we have created a list of the Best Steamtower Slot Sites in January 2022:

Steam Tower slot is a game with five reels and three rows with 15 active paylines. NetEnt released Steam Tower Slot on the 23rd of February 2015.

Many special features can help a player get more chances to win big in during play. These Steam Tower special features include a wild symbol; a scatter symbol, and even a round of free spins. The highest jackpot in the game is 2000 coins.

Steam Tower has a graphic theme that was inspired by the Victorian era and the steampunk movement.

The background of the game is a retro-futuristic tower made from various sheets of metal and other industrial equipment pieced together. Several forest-covered mountains loom over the horizon away from the tower. Cobblestones surround the foot of the tower.

The reels carry over the same theme. The borders look like they were assembled from metal pipes, cogs, and hinges. The paylines of the game are represented by small round screws on either side of the reels. The top of the reels has the game logo and a flashing monitor.

All the vital information and necessary buttons to play the game can be found on the control panel. The panel is at the bottom of the screen. This element of the game carries over the theme with its green buttons and subtle cog design around the Spin button.

The different game characters are some of the symbols in the game. A mystical, adventure-inducing tune plays in the background during the game. All the winning combinations are highlighted to emphasize the winning symbols and the payline.

How to Play Steamtower Slot Online

For a player to get their grappling hooks ready before climbing the tower, there are several things a player has to prepare. These are the game coin value and the round bet level.

The player can automatically play the game at the highest stakes by clicking on the Bet Max button.

Go on the adventure to rescue the princess no matter where you are. Steam tower slot is available on both Android and Apple tablets and mobile phones.

The game Steamtower awards its players with several special features to help them win bigger prizes. This includes a wild symbol that can be stacked, a free spins round, and several multipliers. 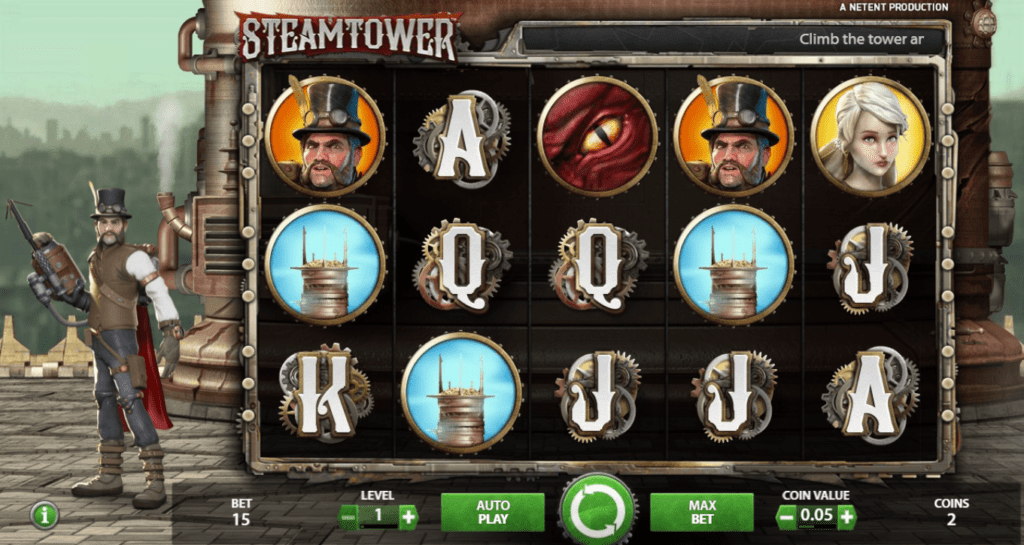 During the free spins round, a wild symbol anywhere on the reels adds two more free spins. This also ascends the game to the next floor.

Steam Tower Slot gives its players a bonus spin round.

To win at Steam Tower Slot, a player has to line up at least three matching symbols across active paylines. Only the highest paying combination per payline will be paid. A symbol combination has to be formed from the leftmost reel to the rightmost reel to be considered a win.

The low-paying symbols in the game are traditional playing card symbols, including the J, Q, K, and A. The symbols are in a fancy font with the various cogs of a mechanism behind each one.

The symbols that have higher pay rates are the game characters and important elements. Each symbol has a gold border. The symbols include the male protagonist, the princess, and the dragon.

Steam Tower was released and developed by the company NetEnt. It is a video-based slot game. Though it was released in 2015, the game is part of NetEnt’s migration to HTML5.

The game is on Instant Play format. This format allows a player to play the game directly on the host website. There is no need to download any other software or application to play the game.

What is the Steam Tower Slot RTP?

Steam Tower has an RTP rate of 97.04%. This is significantly higher than the current average rate in the market.

What is the Steam Tower Slot Variance?

Steam Tower is an excellent game with excellent graphics and animation. The gameplay is smooth, and the exciting special features give its players some pretty high wins in January 2022.

Adding a progressive jackpot can make the game more appealing. All in all, SteamTower is a game that can appeal to the masses.