A trip to Asia has never been this colourful and fun. The glowing pink lotus-filled scenery with the firefly here and there is a beautiful sight to behold.

Gold Money Frog Slots is a 5-reel video slot game with 20 paylines, 3 rows, and an Asian/Oriental theme. Powered by NetEnt, this medium-variance casino game has a 92.96% RTP. The symbols and bonuses include Leaping Wilds, Lantern Scatters, Froggy Free Spins, and a Golden Bonus Wheel with jackpots.

Are you ready to leap golden wins?

Leap into the fun-filled with wild symbols, scatter symbols, free spins, and a golden bonus in this Gold Money Frog Slot Review for January 2022.

Play the game at the best casino sites. From our research, we have created a list of the Gold Money Frog Slot Sites and casino sites in January 2022:

Gold Money Frog is the revamped version of the older game Super Lucky Frog released in 2007.

Gold Money Frog is a game with five reels and three rows. It works with 25 paylines.

The Gold Money Frog slot game was released on the 28th of November 2019.

It has many interesting features to help a player win bigger prizes.

This includes multipliers, free spin rounds, and a bonus game.

The background of the game is a colourful scenery of oriental dusk.

Lotus leaves and flowers float at the bottom half of the screen. A traditional tower stands on the right side of the reels.

The borders of the reels are designed to look like the wooden posts of old oriental architecture.

The game logo is on the upper left corner of the reels. The top of the reels holds the different monitors of the game.

The playing card icons in the Gold Money Frog slot game are in different jewel tones. The Asian items are designed in 3D.

Gold Money Frog Slot’s control panel is at the bottom of the reels.

The control panel holds most of the important information and necessary buttons to play the game.

It is translucent and has white buttons as accents.

Bet Level, the current Bet, and the button to access the paytable are on the reel’s left side.

The right side of the reel has the controls for the coin value and the current coin count.

The Autoplay button, Bet Max option, and the round Spin button are in the control panel’s middle.

A calm oriental soundtrack plays in the background while the reels are turning to complete the ambience.

There are some of the things a player has to set before jumping into the pond of gold such as the coin value and the bet levels.

The Bet Max option lets a player play one round at the highest stake possible.

Keep the Money Frog in your pocket as a lucky charm. Gold Money Frog is playable on both tablets and mobile phones. It is compatible with Android and iOS devices.

Gold Money Frog has special features that boost a player’s chance to win bigger prizes. This game has a wild symbol, scatter symbol, free spins rounds, and a bonus game. 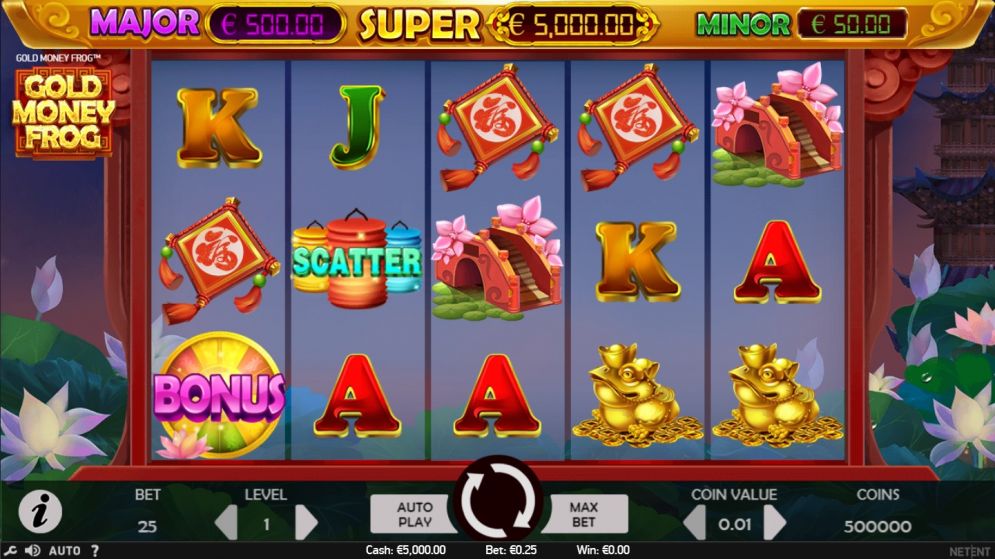 The Wild in the Gold Money Frog slots is the red symbol with the word Wild.

The wild substitutes for the other symbols in the Gold Money Frog slot game to complete winning combinations.

The symbols it cannot substitute for are the scatter and the bonus symbols.

The Wild also pays when matching wild symbols line up across the reels.

If a player lands four wilds, this pays x2000 and landing a wild in all five reels pays x7500.

The scatter in the game is three lanterns in red, yellow, and blue with the word Scatter written across the lanterns.

The player is taken to another screen to spend all the free spins. All the winnings earned during the free spins rounds receives a multiplier of 3.

A golden wheel with pink lotus flowers is the bonus symbol of the game.

The bonus game is a wheel with several sections.

To win at Gold Money Frog, a player must line up at least three matching symbols on the reels across an active payline.

The icons with low pays in the game are the traditional playing card symbols. This includes Jack and the Queen.

It also consists of the Gold Money Frog King and the Ace.

High-paying symbols in the game are traditional items. These are the kites, a red bridge, and a golden dragon.

The symbols also include a golden frog. 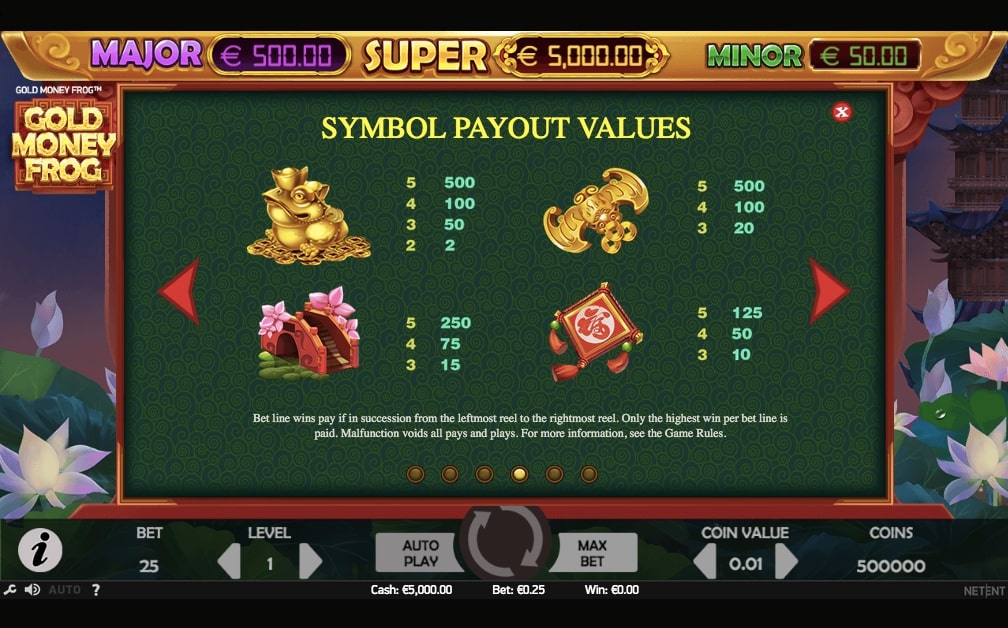 Here are the symbols arranged from the lowest payer to the highest payer.

The values beside each symbol show the pay for the three-of-a-kind combination first.

The highest paying symbol in the game is the golden frog. It pays x2 for a two-of-a-kind and x50 for a three-of-a-kind.

This symbol also pays x100 for a four-of-a-kind combination and x500 for a five-of-a-kind.

It was developed by the slot gaming company NetEnt.

As one of the latest releases by the company, Gold Money Frog runs on HTML5.

NetEnt is expanding its reach to land-based games. They have become one of the most popular game providers in the world.

What is the Gold Money Frog Slot RTP?

Though this return rate is low, a player can still expect fair returns from the game.

Gold Money Slot is a game with medium variance.

The medium variance assures the player that regular pays are landed throughout the game.

Gold Money Frog has good graphics and animation, but it does not exceed expectations.

It has a relatively low RTP rate and variance.

The rewards of the wilds are also low, and so are the progressive jackpots.

Gold Money Frog is a good average game, but this prevents it from standing out enough for a player to return.

But if you want to try something laid back, visit the slot sites listed in this Gold Money Frog Slots Review for January 2022!