Don your long, velvet robes and try your hand in the occult. So summon some courage and sharpen your intellect because this slot is about to put you to the test.

Secret Code slots is a 5-reel, 20 payline, online video slot game, powered by NetEntertainment. This High Variance casino game has an RTP of 96.3% and a explorer/mystery theme. Bonus features that could help to gain 40,000 coins include wild symbols, scatter symbols and lock and key bonus symbols.

In this Secret Code Slot Review, find out how you can become worthy enough to receive the vast rewards from the Illuminati. Break the code and solve their riddles in January 2022. Will you prove to be one of the chosen few?

From our research, we have created a list of the Best Secret Code Slot Sites in January 2022:

Dabble into some occult practices to crack one of history’s grandest of mysteries. You are being tested, and they are watching you from every angle – prove to them you are worthy of their gifts or run and hide from their wrath. Can you crack the code?

With hidden items and mysterious symbols, players are tasked to look for the treasures of the Illuminati. If you are a detective who has what it takes to figure out the Secret Code, then wander through the empty cobblestone streets and play NetEnt’s mystery-themed video slot game that features five reels and 20 pay lines.

If you have the heart to unravel the mysteries, then venture out to collect wilds, scatters, free spins and bonuses on your journey to becoming part of the prestige group. The Secret Code brings players into the world of secret societies, encrypted messages, and dimly lit cobblestone streets. Travel back to the time of the rise of the Illuminati, the 18th century.

The game is dark and haunting, with foreboding music filling the background as you play. Chanting monks and wind whooshing on the empty streets accompany players as they play on, in search of the hidden riches and bonuses.

The images of the monks and different symbols encapsulate the dangerous and mysterious world of the occult practices. Coloured seals, golden rings, and hostile looking characters fill the reels with danger and excitement.

Only players brave enough to venture into the dark, unlit streets are worthy of being initiated into the ranks of the members. Are you ready to be one of the high ranking members?

Here are some reminders to help you look for clues and winning combinations:

Start your sleuthing by clicking on the coin level, coin value, and pay lines buttons found on the control panel on the bottom part of the screen. These buttons can adjust the number of coins, the value of the coins, and the number of active paylines during each spin. Then, you can start spinning the reels by either pressing the Autoplay button or the Spin button.

The Secret Code video slot can be played on all PC and laptop devices (Windows, Apple).

Wilds. The monk with the knife acts as the wild symbol. Wilds in this game substitutes for any other symbol except for the bonus or scatter symbols. 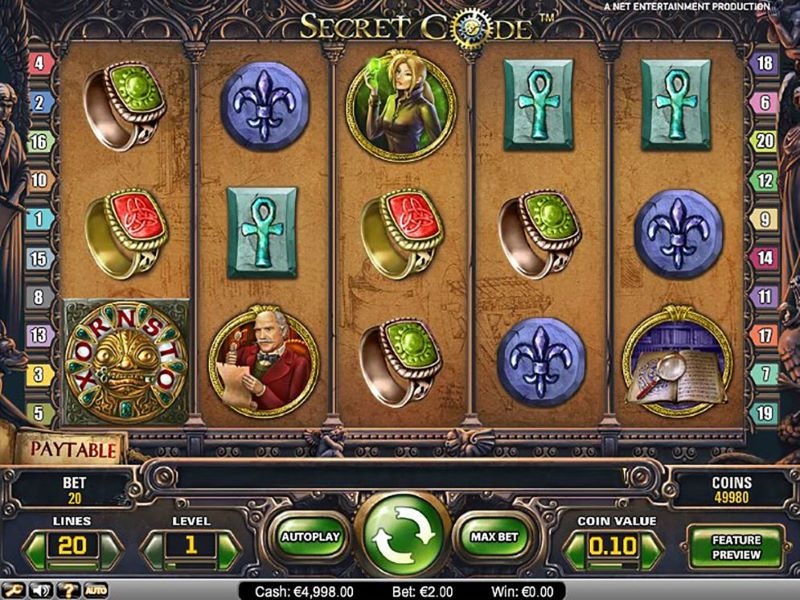 Expanding Wilds. This feature appears on reels 2 to 4. The expanding wild can cover the entire reel with a winning combination. This feature cannot substitute for scatter symbols. Players can win 1 of 2 things: Cash prizes or Free spins.

Scatters and Free Spins. The gold talisman acts as the scatter symbol. Landing at least 3 of these on the reels can result in some free spins and multiplier wins.

Everything in this game that has to do with the occult is found in the most unlikely places, hidden in coded sequences, or requires a particular ornament for something to reveal itself. So for this game, landing 3 to 5 of the gold talisman scatter symbols on the reels can result in free spins and multipliers. Multipliers can be awarded by landing at least 2 scatter symbols on top of the existing scatter symbols.

Usually, being a part of the secret order comes with many perks, and in this case, that just so happens to be the 40,000 coin jackpot. But in order to gain this kind of prize, players must enter the slot game by offering up a bet amounting to anything from 0.01 to 0.5 per spin. 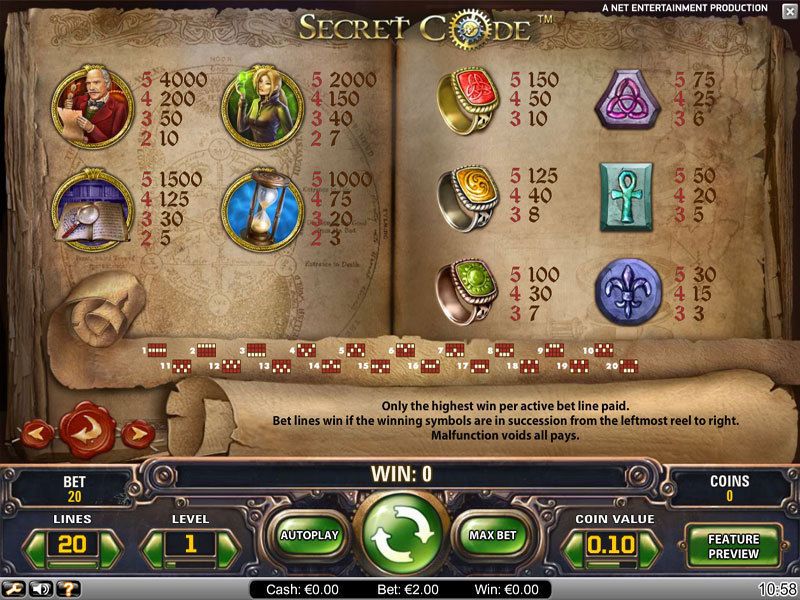 Though, be wary. It takes time and preparation to rise to the ranks of someone who would be worthy enough to garner that prize. So, while waiting, players can keep an eye out for the high and low-paying symbols that can provide some pretty fair payouts.

Symbols such as the man with the scroll, the woman with poison the book and magnifying glass, and the hourglass all act as the higher-paying symbols. Players must land at least 2 to 5 of a kind of these symbols in order to gain the coin wins from them. Landing 2 to 5 symbols on the reels can award players with a minimum of 3 coins, and a maximum of 4,000.

The red, yellow, and green rings make up the lower-paying symbols along with the purple, aqua, and violet talismans. By landing 3 to 5 of a kind on the reels, players can expect a payout of 3 to 150 coins.

The Secret Code slot game is another fun and thrilling game that was made possible by NetEnt Software.

Thanks to NetEnt Software, this thrilling slot is one of the unique and premium online games available for players. Most of these provider’s games provide digital entertainment on all platforms.

What is Secret Code Slots RTP?

The Secret Code video slots is a non-progressive game with an RTP of 96.3%.

With medium to high variance, this game provides players with fair payouts; however, these only land in a semi-frequent manner.

This slot is a thrillingly excellent game to play, whether you are a newbie to the slot world, or if you have the gaming experience. The game provides a good challenge in January 2022 by making the payouts worth seeking. There are also helpful bonus features to aid in making substantial wins as well as an exciting and immersive bonus game. So for players who are seeking an exciting adventure, this is the game to play.