We have all seen construction sites at least once in our lives. Do you wonder how it would feel to have some reel-spinning adventure in that type of environment?

Demolition Squad Slots is a 5-reel video slot game with 40 paylines and a cartoon theme. Powered by NetEnt, this medium variance casino game has an RTP value of 97.1% and a £120,000 jackpot. The bonus features include the Regular & Demolition Wilds, Hazard Scatters, and Free Spins.

Find out this slot game’s RTP value and slot volatility in this Demolition Squad Slot Review for October 2021. We also discuss other slot details such as the Demolition squad’s design, gameplay, and software.

Play the game at the best casino sites. From our research, we have created a list of the Demolition Squad Slot Sites and casino sites in October 2021:

Demolition Squad is a video slot game from NetEnt with a cartoon theme inspired by the asphalt jungle featuring scaffolding and other construction-related equipment.

The colour scheme is bright and is consistent with the cartoonish vibe the game aims to portray.

The reels are framed with scaffolding set against a background of what seems to be a site of ongoing construction.

There are also construction vehicles and tools here and there.

The symbols include low-paying symbols which contain card game ranks such as 10, A, J, Q, and K.

These are designed to look like embossed metal plates.

The high-paying demo squad symbols are drawn against a coloured background.

The highest paying and most important symbol in the Demolition Squad is the white robot against a red background.

This symbol is followed by a guy with shades and a yellow construction helmet, which seems to be pointing upwards.

The next ones are a grinning guy with a jackhammer against a green background, a lady holding a sledgehammer, a peace-signing kid against a blue sky, and a tooth-missing guy with a mohawk and an axe.

Players will hear a grungy rock tune, heavy construction, and demolition equipment noises that are fitted with the game’s theme.

The following are the steps to playing Demolition Squad online:

Players can also set the maximum bet available by clicking on the “Max Bet” button.

This option spins the reels automatically.

Players can spin this slot for free or play for real money. 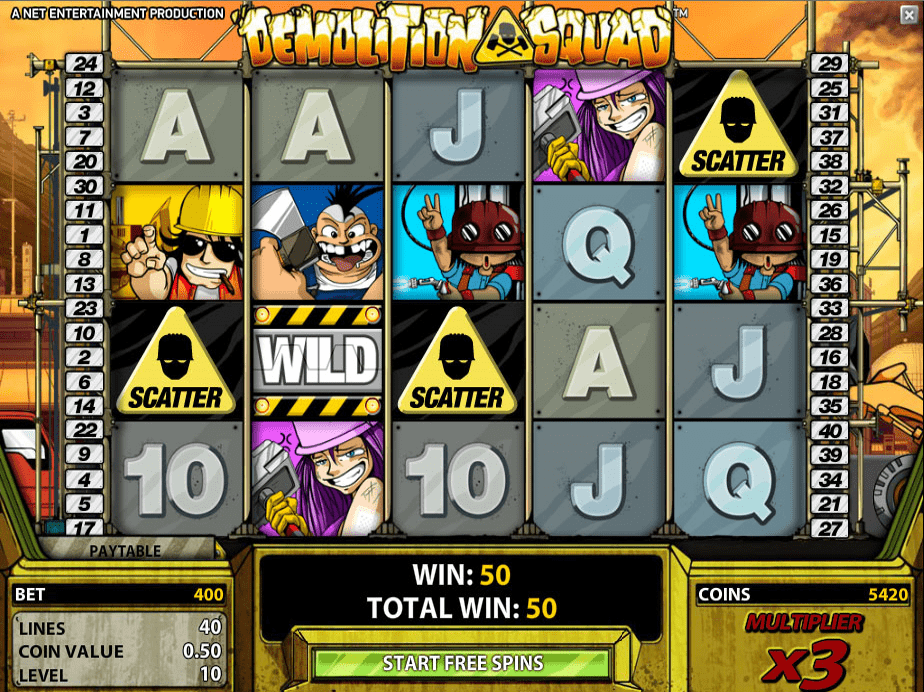 This special symbol can substitute for any symbols in the game apart from the Scatter symbol.

The Demolition Squad slot’s Wild only appears on the second, third, and fourth reels.

These symbols then transform the symbols between them into additional Demolition Wilds.

When this happens, an explosion accompanies the transformation.

The Demolition Squad slot’s Autoplay feature is an excellent option for those who prefer spinning the reels automatically.

The “Auto” button can be found near the lower-left corner of the game screen.

The Scatter symbol is another special symbol in the game, which is represented by a hazard-triangle sign.

Scatter symbols trigger the Free Spins bonus game if three or more of these appear on the reels.

Three Scatters give 10 Free Spins, four give 20, and all five give 50 Free Spins.

During the Free Spins feature, the spins have a 3x multiplier attached to each.

The 5-reel Demolition Squad is played on 40 paylines running from left to right. 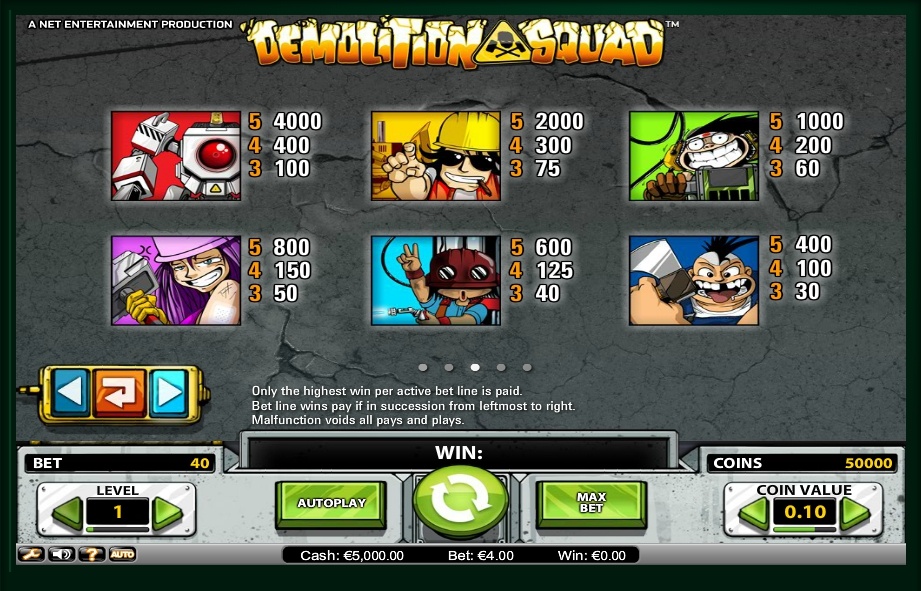 On the first deposit, the highest possible wager is 400 coins.

Meanwhile, the highest award a player can get is a whopping 120,000 coins.

NetEnt is a premium supplier of online casino games to many of the world’s most successful casino operators.

What is the Demolition Squad Slot’s RTP?

This payout percentage means that there could be a 97.10-coin return from the theoretical 100.00-wager.

This slot game also has a medium level of volatility.

This slot volatility means that both the Demolition Squad slot’s prizes and the chances of winning are at a moderate level.

A medium slot variance also means that the Demolition Squad has steady payouts.

To play the 5 reels of Demolition Squad slots, proceed to any of the slot sites listed in this review and apply what you learned!