Are you into 80s style parties with energizing music and colourful neon lights flashing everywhere?

Twin Spin Deluxe slot was developed and released in 2018 by Net Entertainment.

Twin Spin Deluxe Slots is a 6-reel, 243 payline, online video slot game, powered by NetEnt. The medium variance casino game has an RTP of 96.61% and an Eighties Era theme. Bonus features, like the Twin Reel Feature, Cluster Pays and Twin Spin Deluxe Wilds, could help you win up to £100,000 in cash!

Read more about these features in this Twin Spin Deluxe Slot Review for September 2021.

Play the game at the best casino sites. From our research, we have created a list of the Twin Spin Deluxe Slot Sites and casino sites in September 2021:

It has a theme inspired by the energetic music and neon lights of the eighties.

The reels are set against numerous squares of neon lights.

They are also housed in a black gridded rectangle with sleek black borders.

There are six vertical reels, displaying five symbols each.

The Twin Spin Deluxe symbols include the classic J, Q, K and A card symbols and the familiar lucky 7s, BARs, and bells.

Since this game uses the Cluster Pays mechanics, there are no paylines to be adjusted.

Players can also set the maximum bet by clicking on the Twin Spin Deluxe slot’s MAX BET button, which spins the reels automatically.

This video slot employs the Cluster Pays mechanics wherein clusters are used instead of the paylines.

In this feature, players must match nine or more glowing icons of the same kind to form a cluster and win a prize.

These icons must be from adjacent reels and must be connected either horizontally or vertically. 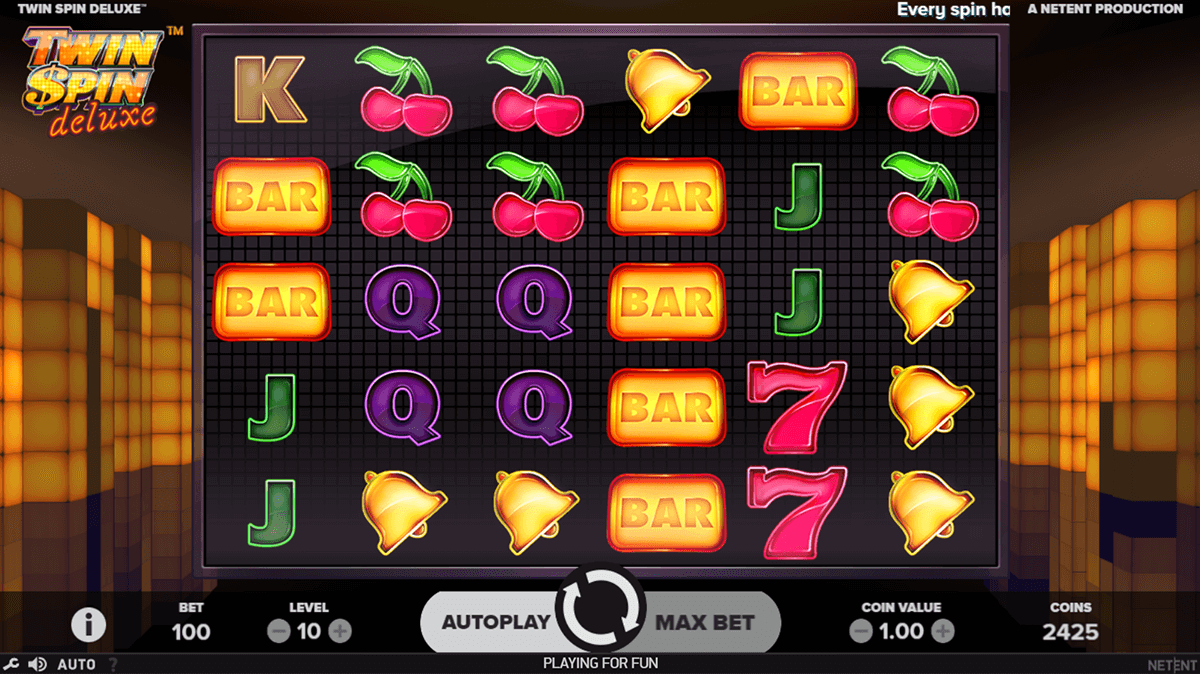 The game’s Wild symbol can appear on the second, third, fourth and fifth reels.

It can also trigger more potential bet lines by substituting for any other symbols in the game.

This feature can be triggered across all five reels.

During this feature, at least two reels will sync up and spin together, increasing each player’s winning chances.

Additionally, these twin reels can also expand to synchronize three, four, five, or even six reels.

Twin Spin Deluxe slot does not have a Free Spins feature. 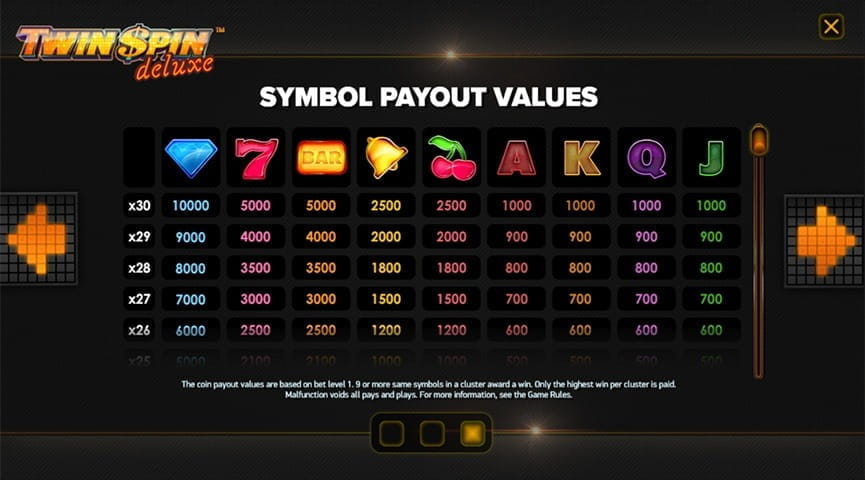 This game boasts the highest possible payout worth 10,000 times the stake by wagering the maximum bet!

Net Entertainment has been providing premium gaming solutions for 20 years.

This payout percentage for Twin Spin Deluxe slots means it has a theoretical return of £96.61 if players were to wager £100.

This slot variance implies that the Twin Spin Deluxe slot has steady payouts, and players have moderate winning chances.