Are you curious as to how it would be like to dive into a reel-spinning adventure in old arenas from the early 1900s?

Fisticuffs Slots is a 5-reel video slot game with 10 paylines, 3 rows, and a 1900s boxing theme. This low-variance NetEnt casino game has a 96.7% RTP. The symbols and bonuses include boxing gloves, championship belts, Horizontal Wilds, Diagonal Wilds, a Boxing Feature, and a Stacked Wilds Feature.

Put your fighting gear on and choose your weapon for this Fisticuffs Slot Review for September 2021!

Play the game at the best casino sites. From our research, we have created a list of the Fisticuffs Slot Sites and casino sites in September 2021:

It has a theme inspired by boxing in the early 1900s when gentlemen used to punch their way toward victory.

When it comes to graphics design, the fighting-inspired theme of Fisticuffs is evident from the game screen.

The colour scheme is consistent with the knock-out fun vibe the game aims to portray.

The game takes place inside a boxing ring complete with a faintly visible crowd alongside the ring. There are also red curtains drawn behind the ropes.

There are four low-paying symbols. The lowest-valued among these is a metal spit bucket and towel.

This is followed by an old-fashioned leather boxer’s show. Then there’s a wooden stool and a brass bell.

Meanwhile, the three high-paying symbols consist of a pair of red boxing gloves, a golden cup trophy, and a golden embellished championship belt.

The last one is the highest-paying among the three.

The background audio is also impressive and amazing, given that it further enhances the overall boxing feel of the game.

All the while, players will hear an old-fashioned peppy piano piece.

How to Play Fisticuffs Slots Online

To play Fisticuffs online, players must:

Players can also play Fisticuffs with the maximum bet available by clicking on the “Max Bet” button.

Fisticuffs is fully optimized for mobile play and is available on all mobile devices such as iPhones, iPads, Android phones, and tablets.

The Fisticuffs slot offers special features, including the following: 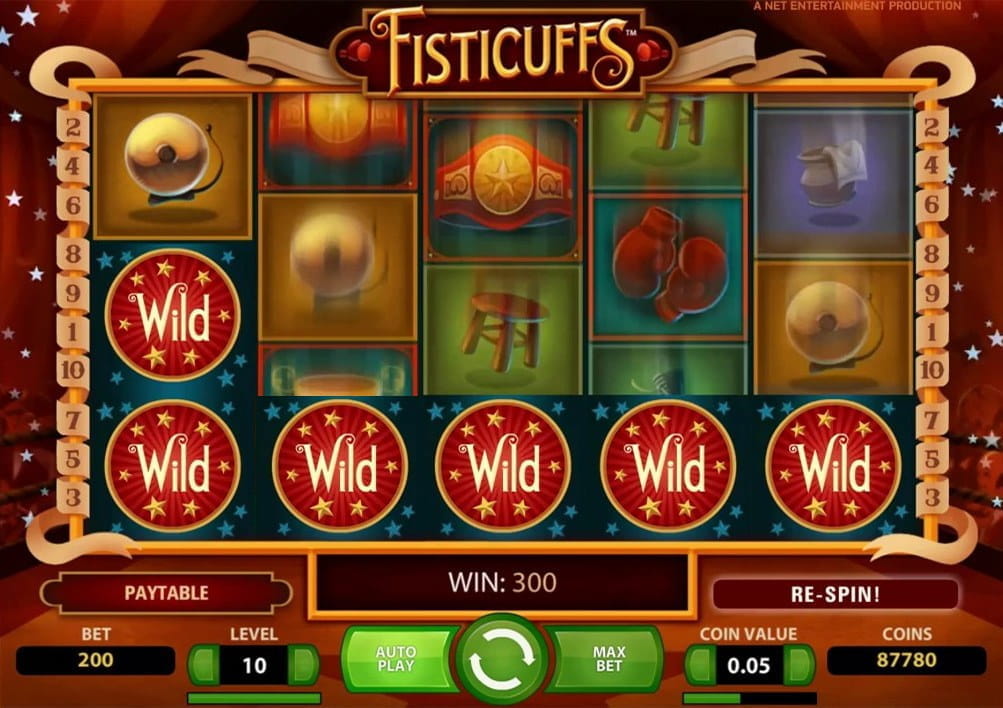 This is a special symbol in the game which is represented by a heavyset boxer with hiked-up pants, tank top, and a fedora.

He can be seen on the third reel and can substitute for all symbols.

The Diamond Wild is another special symbol in the Fisticuffs slot game.

It is represented by a scrappy boxer with a heavy handlebar moustache and is wearing a scowling expression.

He can be seen on the second and fourth reels. Like the heavyset boxer, he can also substitute for any other symbol in the game.

This is a special feature in the game consisting of fun animation.

It is triggered when the Diagonal Wild and the Straight Wild symbols land next to each other either horizontally or diagonally.

In this feature, the adjacent symbols get transformed into extra Wilds that stay on the reels for one awarded re-spin.

The feature’s fun animation involves the two Wild boxers meeting up and punching one another.

With this ramble, a regular Wild symbol pops up between them.

This special symbol appears on the first and fifth reels and adds up into more winning paylines.

The Stacked Wild is triggered during the re-spin, which results from the appearance of the extra regular Wilds.

The reels turn automatically for the player’s preferred number of times without interruption on autoplay mode.

The Fisticuffs slot does not have a Free Spins feature.

The Fisticuffs slot offers a total of 10 paylines and many chances of winning big through the Straight Wilds, Diagonal Wilds, and Stacked Wilds.

The minimum coin size for Fisticuffs is 0.01, while the maximum is 1.

The number of coins per line for Fisticuffs runs from 1 to 10. 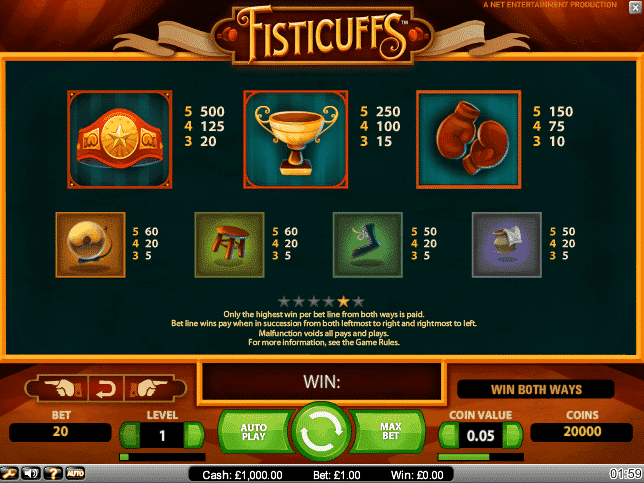 Meanwhile, the highest possible payout would be 500 coins if players manage to get five championship belts on the wheels with the highest coin value.

Fisticuffs slot is powered by NetEnt.

Net Entertainment has been known to be a true pioneer in the gaming industry for 20 years.

With this, NetEnt is popular for being unique, premium, informed and ahead, all at the same time.

What is the Fisticuffs Slot’s RTP?

This payout percentage means that there is a theoretical return of 96.7 coins for an investment of 100 coins.

This means that even though the prizes offered are a bit on the low side, the chances of scooping them are definitely high!

Given its high RTP rate along with the incredible features mentioned above, expect Fisticuffs to keep players entertained while spinning the reels towards victory along with its amazing music and graphics!

Head over to the Fisticuffs Slot Sites listed in this Fisticuffs Slots Review  for September 2021 to start your spinning adventure through the fighting world of the 1900s boxing champions!