Put your armour on and get into the besieged fortresses and battles of Fire Siege Fortress slots!

Fire Siege Fortress Slots is a 5-reel slot game with 576 paylines and 3 to 5 rows. NetEnt included Gold Wild, Archer Attack, Dragon’s Breath, Trebuchet Attack, Crown Scatter, and Siege Free Spins in this warfare-theme casino game. It has a £1200 jackpot with a 96.01% RTP and high variance.

Know more including this slot’s RTP and slot variance through this Fire Siege Fortress Slot Review for September 2021!

Play the game at the best casino sites. From our research, we have created a list of the Fire Siege Fortress Slot Sites and casino sites in September 2021:

It has a fantasy theme inspired by the defending fearless knights of the middle ages.

The colour scheme is dark and is consistent with the mysterious vibe the game aims to portray.

The game takes place inside a heavily fortified castle where players see a fearless knight standing on the left side of the Fire Siege Fortress slot game screen.

He defends the castle from ruthless enemies.

The Fire Siege Fortress symbols consist of everything players can expect from a video slot game with this theme.

The low-paying symbols consist of the usual 10s to As written in medieval-style characters.

Meanwhile, the high-paying symbols consist of a battle hammer, a war axe, the knight’s sword, the knight himself, and a dragon.

The background audio is also impressive and unique, given that it further enhances the overall battle feel of the game.

All the while, players will hear raging battle noises such as heavy sounds of armour and weapons.

Players can also play Fire Siege Fortress slots with the maximum bet available by clicking on the “Max Bet” button.

The Wild is a special symbol in the game which is represented by the character “W” which is ornamented with gold.

The Wild Windows are the second, third, and fourth reels which are found on the bottom positions.

If the Wild symbol lands on these three windows, it activates respective bonus games depending on which reel it has appeared on. 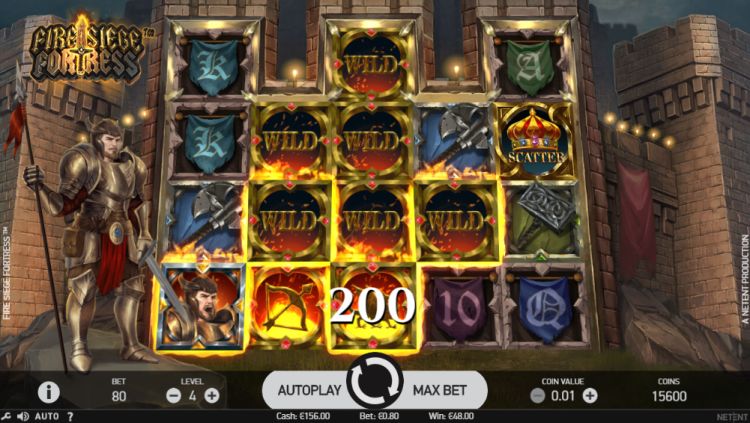 These bonus games are as follows:

This is activated when the Wild symbol lands on the second reel.

Two archers will then appear on the right side of the game screen and shoot up to three arrows to three random positions on the reels which would then turn to Wild symbols.

Any reels can be shot except for the ones where a Scatter or a Wild is already present.

This bonus game is triggered when a Wild appears on the third reel.

A fire-breathing dragon then appears and lights up the entire reel to turn it into a Wild window.

This is activated when a Wild symbol appears on the fourth reel.

Two giant Wilds may then land on any positions on the screen.

The Scatter is another special symbol in the game which is represented by a Crown.

A certain number of this Crown appearing on the reels may activate either the Fire Siege Free Spins feature or the Coin Win feature.

This may be triggered when two Crowns appear on the reels.

At least one or both of these symbols have to land on top of the first, second, or third reels.

Upon activating this feature, an instant cash reward amounting to 5x the total stake is offered.

The Fire Siege Free Spins is activated when three Crowns appear on the reels.

Three Free Spins may also be awarded when two Crowns appear on the reels.

At least one or both of these symbols have to land on top of the first, second, or third reels.

Fire Siege Fortress offers a total of 576 ways of winning. 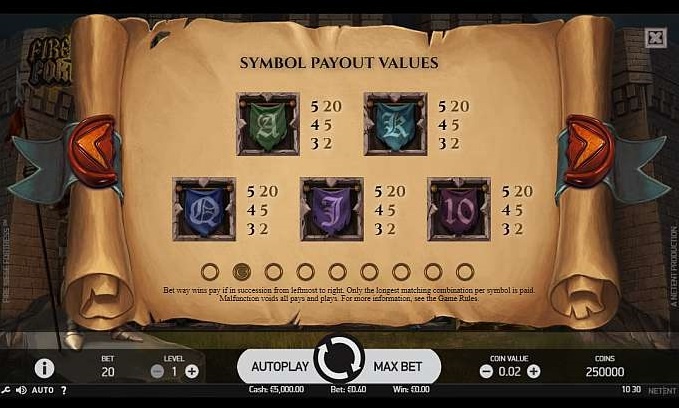 There are 30 winning payouts listed.

The bet size starts with a minimum of 0.20 coins and peaks at a maximum of 100 coins.

Landing five of each symbol gives a win ranging from 1x to 6x multipliers.

70% of the players’ wins are expected to show deficit and would offer at most their total stakes ranging from 2 to 20 coins.

The rest of their wins would offer a payout ranging from 40 to 120 coins.

Landing five of the highest-valued symbol in the game, which is the Dragon, pays out a whopping 1,200 coins at maximum bet.

Meanwhile, the highest possible payout would be the players’ stake multiplied by 3,456.

During the bonus round, players will be receiving a maximum award of 18 Free Spins.

NetEnt has been a pioneering market for 20 years.

With exciting games powered by their cutting-edge platform, the people behind NetEnt take pride in delivering flexible digital casino solutions to their customers.

This makes them unique, premium, informed and ahead, all at the same time.

What is the Fire Siege Fortress Slot’s RTP?

This payout percentage means that there is a theoretical return of 96.01 coins for a 100-coin wager.

The Fire Siege Fortress slot game has a medium to a high level of volatility.

This means that even though the chances of winning are a bit on the low to moderate side, the prizes to be taken home are definitely high!

Despite not having a progressive jackpot, the helpful Wilds and Scatters are already enough to give the players what they deserve.

Fancy going on an enriching trip through the dangerous world of the medieval knights?