Witness some Roman emperors conquering the world through this action-filled Victorious slot!

NetEnt released the Victorious slot in 2011.

The Victorious slot has Wild Substitutions, Scatter Wins, and Free Spins, along with a game screen that resembles a Roman emperor’s army and kingdom.

Victorious Slots is a 5-reel video slot game with 243 paylines and a Ancient Rome theme. Powered by Net Ent, this casino game comes with a wilds, free spins feature and scatters. The game has a number of symbols such as a golden eagle and a golden wreath.

Play the game at the best casino sites. From our research, we have created a list of the Victorious Slot Sites and casino sites in October 2021:

It has a theme inspired by the Roman Empire during Caesar’s heyday.

During this time, Caesar, together with the Roman army, conquered land by land and destroyed everything in their path.

They pillaged and looted properties as they went marching towards victory.

The Victorious slot takes players to a background filled with marching soldiers.

The reels are set against the middle of the grumpy-looking army men and are framed with a marble structure.

There are five vertical reels in Victorious slots, displaying three symbols each.

The slot also shows an army of Roman soldiers marching forward, a charging warrior wearing silver armour, a centurion wearing golden armour, and the emperor himself standing against a pink background. 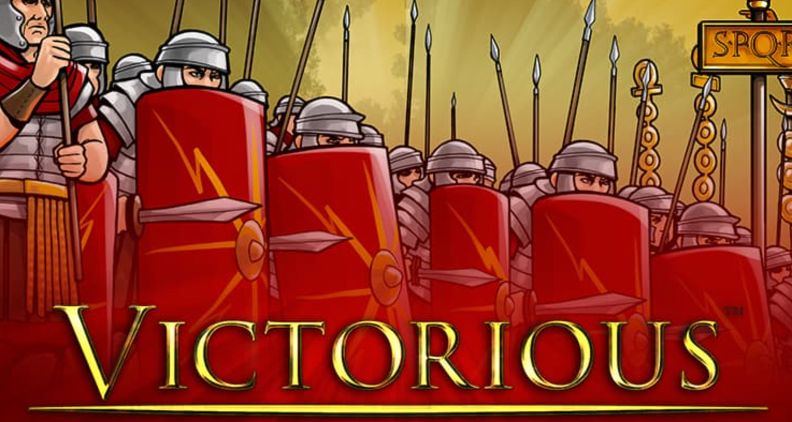 How to Play Victorious Slots Online

Players can also wager the maximum bet available in Victorious slots by clicking on the MAX BET button.

The Victorious slot is fully optimized for mobile play on iPhones, iPads, Android phones, and tablets.

The Victorious slot offers special features, including the following:

A golden eagle represents this special symbol in the game.

It can substitute for any other symbols, including the Scatter symbol.

A number of this symbol activates the Free Spins feature.

Players can automatically turn the reels without interruption through the Victorious slot game’s Autoplay feature.

Five golden wreaths will trigger as many as 25 free spins.

During this round, all wins acquired are subjected to a 3x multiplier. Players will also receive a bonus prize each time the free spins get activated.

The Victorious slot offers a total of 243 fixed paylines.

The minimum bet in Victorious slots is only 0.25 coins per spin.

Victorious slots players may also bet up to 125 coins per spin by adjusting the control panel’s bet settings.

The Victorious slot game boasts a maximum possible payout worth a whopping 1,500 times the stake or a total maximum win of 15,000 coins.

The 1500x multiplier will only be won when five Julius Caesar symbols appear on an active payline.

The Victorious slot is powered by NetEnt.

What is the Victorious Slots RTP?

The Return to Player for Victorious is 96.9%.

This payout percentage for Victorious slots means it has a theoretical return of £96.9 if players were to wager £100.

The Victorious slot game has medium to high-level volatility.

This slot variance implies that the Victorious slot offers high payouts, which players have low chances of winning.

Enter the world of Julius Caesar and the other men making up the Roman army through Victorious slots!

The Victorious slot offers Wilds, Scatters, Free Spins, and a game screen that resembles a Roman emperor’s army and kingdom.