Jump into your submarines and head down into the sea’s unexplored depths in January 2022. Do you dare venture into the deep blue?

Subtopia Slots is a 5-reel, 20 payline, online video slot game, developed by NetEnt. This medium variance casino game has an RTP of 96.1% and an Underwater Adventure theme. Bonus features, including Golden Totem Wilds and Blue Compass Scatters, could help you win up to a maximum of 120,000 coins!

In this Subtopia Slot Review, learn how to dive down deep to the ocean floor to get as many oceanic prizes the seas have in store for you. Avoid strong currents from sweeping your wins, and you may even stumble upon the jackpot prize!

From our research, we have created a list of the Best Subtopia Slot Sites in January 2022:

Ready your crew and go on a thrilling underwater adventure, 20,000 leagues under the sea! It is the time of steampunk, of experiences into the brave world, the time of exploring the big unknown. In NetEnt’s Subtopia, players will be plunged deep into the depths of the ocean to find prizes that the seas have long kept from humans.

Players will have to join the steampunk crew – the ever knowing captain, the nerdy scientists, the diver who ventures into the deep, and the mechanic. Scour the seas for wins, explore the underwater metropolises, and even stumble upon hidden shipwrecks that hold jackpot prizes.

In this 5-reel, 20-pay line video slot game, players will be joining curious-looking scientists and a one-eyed captain as the submarine ventures deeper into the unknown. In this progressive slot game, players will have numerous ways to fill up their tanks with coins and prizes galore, thanks to the help of the wilds, scatters, and free spins.

The sea and the seafloor welcome players into the game. The symbols are made up of the characters who will accompany the players during the game, as well as barnacle ridden letters that represent the lower-paying symbols.

Upbeat music plays as the reels spin, marking the start of the adventure. Although there may be a lack of bonus games, the illustration and graphics of the game make up for it as it draws in players more into the depths of the game.

So hold your breath, dive down, and see what treasures the sea is waiting for you to find.

How to Play Subtopia Slot Online

Avoid drowning when you discover the wonders of the deep by following these steps:

Before diving, adjust the values and levels of the bets by clicking the (+/-) sections on the control panel. This is located on the bottom part of the screen. After all the amounts are settled, players can begin a single spin or several spins by clicking either the Spin or Autospin buttons.

You can now explore the seven seas on your submarine online on any mobile, tablet, or PC device.

Wilds.  The golden totem marked with the word “wild” is this slot game’s wild symbol, and it can stand in for any other sign except for the scatter and free spins symbol. During the main game, a random multiplier will appear to increase wins by up to 5x. 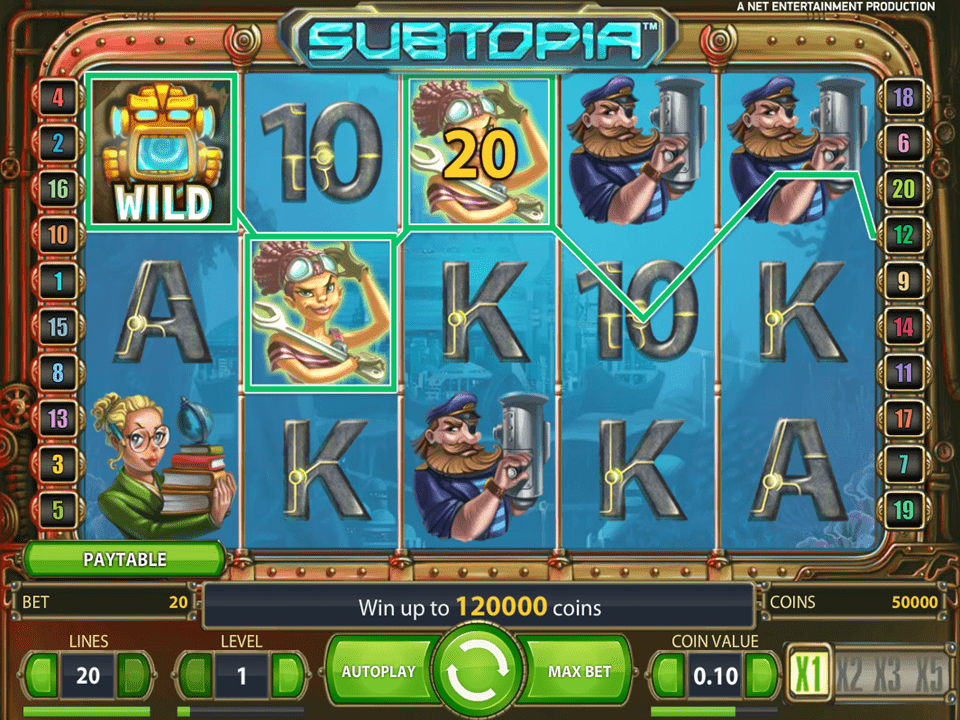 Scatters and Free Spins. The compass marked with the word “scatter” represents the scatter. In order to land the game’s free spins, all that’s needed are three or more of the scatters to land on the reels.

This subtopian game can award players with a jawdropping 120,000 coin jackpot prize. But, in order to win that kind of prize, players must engage in the game of slots which costs 0.01 to 0.5 coins per spin. 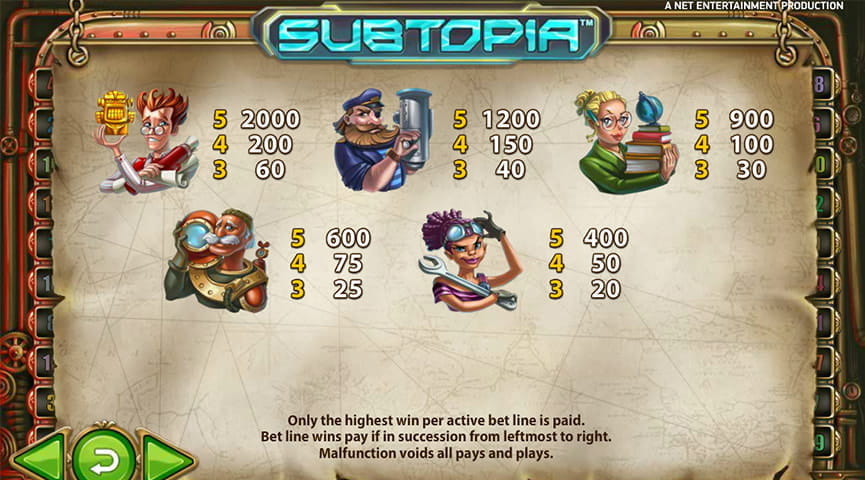 Placing the bets will then introduce players to both the high and low-paying symbols, all of which can help nab the jackpot prize. So, by landing the scientist holding a totem, a one-eyed captain, a female scientist, a deep-sea diver, or the female mechanic, players can win as little as 20 coins for landing 3 of a kind, or as much as 2,000 coins for landing 5 of a kind.

Meanwhile, the A, K, Q, J, and ten symbols can bring players some lower amounts. By landing 3 to 5 of a kind on the reels, players can get a minimum of 5 coins and a maximum of 150 coins.

This incredible deep-sea adventure was made possible by NetEnt Software.

Whether you’re new or experienced, NetEnt Software has got you with their collection of unique and premium online games. Their games provide all players with digital entertainment on all platforms.

What is Subtopia Slots RTP?

Subtopia is a progressive video slot game that has an RTP of 96.1%.

This video slot has a medium variance level which means that during the game, players can expect some adequate amounts to pay except, only in a semi-frequent manner.

To all those who are curious to see what hidden treasures lie underneath the calm waves, this is one game that is worth exploring in January 2022. The game may have a limited amount of bonus features, but all these help in landing some wins. The limit poses somewhat of a challenge, so this video slot is suited for those players who are more intermediate or expert in this type of game.

Although the game’s theme, graphics, and overall gaming experience do prove to be worthwhile, players will fully appreciate it’s generosity over everything else.